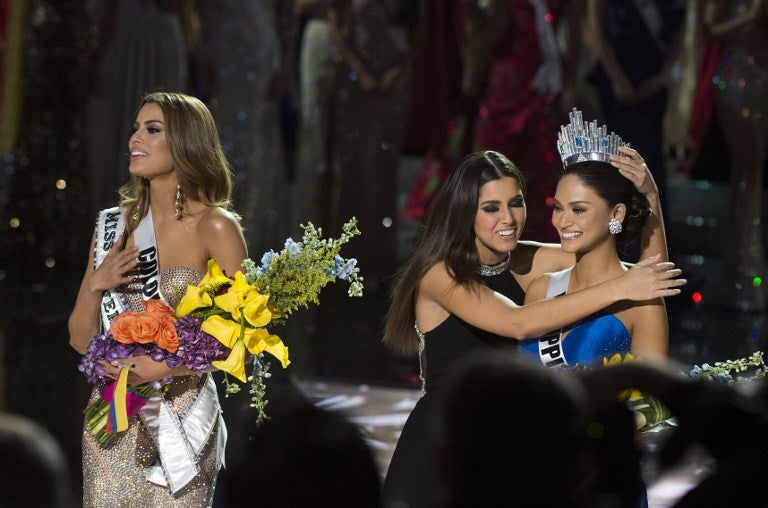 He had one job, and Steve Harvey flopped.

The Philippines’ Pia Wurtzbach thought she lost the crown – and that Colombia secured a back-to-back at Miss Universe – when suddenly the host announced that he made a mistake and that Ariadna Guttierez came in second.

What a win for Wurtzbach, who ended a 42-year hunt for the Miss Universe crown at Planet Hollywood, Las Vegas, Nevada.

The Philippines last took home the crown in 1973, courtesy of Margie Moran. It was a short wait after the first victory of Gloria Diaz in 1969.

The closest the Philippines got before this was with Janine Tugonon in 2012 and Miriam Quiambao in 1999.

Wurtzbach was visibly in shock while already comfortably standing beside third placer Olivia Jordan. She took minutes to get to the front, where an equally shocked Gutierrez stood – who had already waved and given a million flying kisses.

Even Miss Universe 2014 Paulina Vega went back onstage to correct the results, but the telecast ended before she could do so.

Harvey took responsibility for the mistake, even showing the cue card.

Wurtzbach showed off a well-toned body, achieved through a strict diet and intense core training supervised by trainer John Cuay. She visibly shed the weight she was criticized for when she was crowned Binibining Pilipinas 2015 in March.

Heavy favorite Vietnam did not make the first cut. Also not making it among the popular bets were Peru and India.

The Fil-German topped the online vote, which for the first time in Miss Universe’s history was counted in the results.

Brazil, Australia, Indonesia, Belgium, South Africa and Mexico were eliminated going into the next round.

In the evening gown competition, the 26-year-old lass from Cagayan De Oro competed in a gown designed by Albert Andrada, the same person that designed hes Manila carnival queen-inspired terno.

The gown caused a stir on social media a few days earlier. The designer and the dress reportedly did not make it on time for the preliminaries, compelling handlers to scramble for an alternative gown.

They chose a red gown from nine designs submitted to them by Los Angeles-based Filipino designer Oliver Tolentino, on a skiing vacation in Aspen, Colorado, when he was contacted.

The blue “Pearl of the Orients”-inspired number was an easy standout in the contest, and she was called third – thanks again in no small part to the online vote, where she led.

Also in the Top 5 are France, Colombia, Australia and USA. Venezuela, second to USA in the number of Miss Universe crowns, was eliminated.

The first question-and-answer round was a tough one, with the ladies getting country-based questions on hot-button issues, far from the stereotypical questions on “the essence of being a woman,” “your biggest fear,” “world peace.”

The inquiries delved into drug abuse, terrorism, gun control, marijuana legalization and, for the Philippines, the dangerous territory of US military presence in the country.

Wurtzbach, who went first, said the Philippines is showing strong influences from the United States and, finally, that the Filipinos are welcoming the issue.

USA’s answer to the gun-control question was convoluted. Gun ownership is hotly debated in the country, with strong lobbyists backing it. Colombia said education is key to answering their drug problem.

France and Australia failed to make the top 3. Wurtzbach was the last lady called in the Top 3, even though she yet again topped the online vote.

The Top 3 format hasn’t been used in a long time at Miss Universe — now the same as Miss World.

In the new format, Miss Universe introduced an added round where they would ask the ladies the same question.

The final question this year is similar to that of Miss International and Miss World: Why should you win as Miss Universe?

“To be a Miss Universe is both an honor and a responsibility,” said Wurtzbach. If I were to be Miss Universe, I will use my voice to influence the youth and I will raise awareness to certain causes like HIV awareness that is timely and relevant to my country, which the Philippines. I want to show the world, the universe, rather, that I am confidently beautiful with a heart.”

While she chose to carry an advocacy, USA and Colombia said they fit what the beauty contest is looking for.

This year, the judges’ scores, the online vote and the vote from the 77 other eliminated candidates were factored in.

The Philippine bet was an early favorite at Miss Universe, taking a spot in many pageant analysts’ prediction lists even before she flew to the venue.

As soon as she flew in, the Filipino community in the United States showed unfaltering support. At the preliminaries and the finals, she received roaring applause every time she walked onstage from scores of fans, some coming from faraway states.

In the finals, a host commented: “Seems like the entire Philippines is here.”

Like predecessor MJ Lastimosa, Wurtzbach joined Binibining Pilipinas 2015 two other times – in 2013 and 2014 – before she secured the right to represent the country at Miss Universe. She was the top favorite of readers who joined a prediction game by Inquirer Super.

She was crowned after answering a question on online censorship by then Justice Secretary Leila De Lima.

“I think that we should be careful about what we post online especially our thoughts and our opinions, that we don’t hurt anybody especially selfies, we have to be careful with what we post especially in our bodies, in our faces. So always think before you click,” she said.

She was candidate No. 10, then followed in the lineup by fellow favorite Janicel Lubina, the eventual Bininbining Pilipinas-International and Top 10 finalist in the Miss International pageant in Japan.

It also reinforces the Philippines’ successes in the “Big Four” pageants, with Miss International, plus Miss Earth and Miss World. Angelia Gabrena Ong snagged the Miss Earth crown and Hillarie Parungao placed in the Top 10.