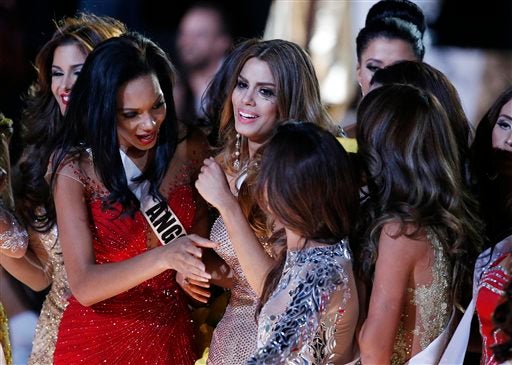 Miss Universe 2015 first runner-up Ariadna Gutierrez was graceful in defeat, despite being subjected to an awkward situation after the pageant’s host wrongly announced that she won the pageant.

In a short video posted on Miss Universe 2015’s social media accounts, Gutierrez said that everything happens for a reason.

“Everything happens for a reason. I’m happy for all, for what I did. For (making) this dream come true. So thank you to all, for voting for me,” a teary-eyed yet smiling Gutierrez said.

Many netizens sympathized with Gutierrez’s fate as they slammed Harvey for his blunder.

Meanwhile, the event even sparked a flurry of “Colombia-zoned” memes which meant a stunted finish or win.

During the pageant’s coronation night on Monday (Philippine time), Harvey first announced that Gutierrez was the new Miss Universe, only to rectify it minutes later.

Harvey and the Miss Universe Organization have since apologized for the mistake.

Wurtzbach ended the Philippines’ 42-year drought for the Miss Universe crown. She is the third Filipina to win the coveted crown. AJH/IDL