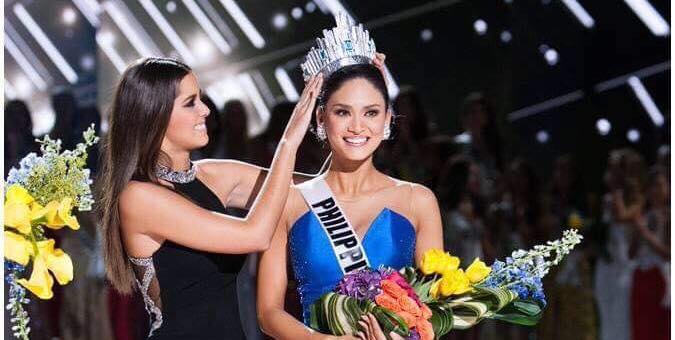 Miss Univers 2014 Paulina Vega finally crowns the right girl, and she happens to be the Philippines' Pia Alonzo Wurtzbach.

FORTY-TWO years of waiting for one of their own to be crowned Miss Universe weren’t enough, as pageant-crazy Filipinos had to wait a few seconds more before American host Steve Harvey corrected his mistake: Miss Universe 2015 wasn’t Ariadna Gutierrez-Arevalo as he earlier announced, but 26-year-old German-Filipino beauty queen Pia Alonzo-Wurtzbach.

“It was my fault,” Harvey kept telling a global TV audience and those who paid to watch the show at Planet Hollywood Hotel in Las Vegas, venue of this year’s contest.

This year’s edition, under new owners IMG, a New York-based events and talent management company, which bought the 64-year-old beauty pageant from billionaire businessman and Republican frontrunner Donald Trump, proceeded without a hitch until Harvey announced the names of the winner and first runner-up.

Miss USA Olivia Jordan, who, like Wurtzbach, was an online and crowd favorite, clinched second runner-up.

“Since Steve was new at hosting Miss Universe, I think he was confused,” said Manila-based publicists and events planner Albert Almendralejo, who witnessed the entire show up close. “I heard that he was told by the Miss Universe staff to announce Miss Colombia’s name first before Pia’s. He did do that, but he unwittingly managed to interchange their positions.”

After realizing his mistake, Harvey had to correct himself to the shock of both Arevalo, who was already wearing the crown and waving a small Colombia flag, and Wurtzbach, who was in the sidelines with Jordan and the other delegates. He even waved the written results to the audience to convince them.

With some prodding from Jordan and the other girls, a reluctant Wurtzbach walked to the center of the stage. It probably took awhile for the Spanish-speaking Arevalo to realize what was happening, said Almendralejo, since she just stood stoically with “her chin up.”

Boos and jeers from the Latino audience were countered by cheers from Wurtzbach’s Filipino supporters, who dominated the venue.

It took Arevalo’s compatriot Miss Universe 2014 Paulina Vega to break the impasse by gently removing the crown from the first runner-up’s head and putting it on Wurtzbach’s.

“Not everything was captured on TV,” said Almendralejo. “A crying Miss Colombia run to her fellow Latinas, while a somewhat dazed Pia received support and profuse congratulations from Miss USA and most of the delegates from Asia and Europe.”

“I want to apologize emphatically to Miss Philippians (sic) and Miss Columbia (sic),” Harvey later said on Twitter. “This was an honest human mistake. I am so regretful.”

Instead of the usual ten to 12 judges, only four celebrity judges, including Miss Universe 2012 Olivia Culpo and celebrity blogger Perez Hilton, determined the results this year. For the first time in the pageant’s history, organizers allowed online voting to constitute 20 percent of a contestant’s overall score in each event. There were four events: swimsuit, evening gown, and two sets of question and answer. Wurtzbach topped every online voting on all events.

From Top 15 contestants, the results of last week’s preliminaries, the number of girls was whittled down to 10, then five and finally three. When the combined online votes were counted, Wurtzbach emerged on top.

Each contestant in the Top 5 answered a question relating to current issues in her country. Wurtzbach was asked about her views on the presence of American troops in the Philippines.

Filipinos and Americans, she said, have had a long history and “special relations.” As a “colonized” people, Filipinos are generally welcoming of Americans. She didn’t see it as a “problem.”

For the second set of question and answer, the Top 3 were each asked the same question: Asked why she would be an ideal Miss Universe, Wurztbach gave a short and straight answer about the importance of having a voice to pursue her advocacy of reaching out to the youth and AIDS and HIV awareness. Being Miss Universe, she said, is about being “confidently beautiful with a heart.”

Another twist awaited the Top 3 as Harvey told them that their fellow delegates would also weigh in on the final outcome. For the first time in years, the Philippine delegate was wearing a gown designed by a Filipino–Albert Andrada. Pageant observers believed that the blue silk gazaar serpentina gown was instrumental in boosting Wurtzbach’s chances in the finals.

Wurtzbach follows in the footsteps of Margarita Moran, the second Filipina to win Miss Universe in 1973. Moran won the titled four years after Gloria Diaz first brought home the crown to the Philippines 1969.