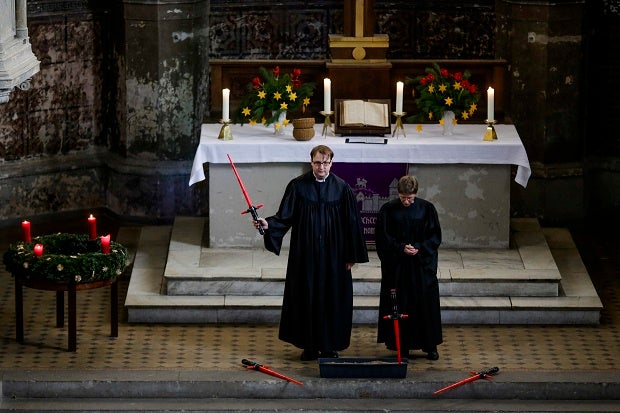 Vicars Lucas Ludewig, left, and Ulrike Garve, right, celebrate a Star Wars themed church service, at the Zion Church in Berlin, Sunday, Dec. 20, 2015. About 500 people, some carrying light saber props or wearing Darth Vader masks, attended the service, more than twice as many as usual on a Sunday. AP

BERLIN — The force is strong in Berlin.

A church in the German capital invited “Star Wars” fans to attend a special service Sunday themed on the sci-fi blockbuster in an attempt to attract more young people into the pews.

About 500 people heeded the call and attended the service, some carrying light saber props or wearing Darth Vader masks. It was more than twice as many as usually come to Zion Church on a Sunday.

“We were very happy to see so many people in the church today,” said Protestant pastor Lucas Ludewig said after the service. “It’s great that there are subjects that people are interested in. They trust us to make them part of the church service without making it too Christian or too Star Wars, but to find a good compromise.”

READ: White House awakens to the force of Star Wars

With the film’s theme song — played on the church’s organ — still echoing around the rafters, the 30-year-old said he came up with the idea of the “Star Wars” service while talking with fellow pastor Ulrike Garve, 29, about how much they were looking forward to the seventh instalment in the franchise “Star Wars: The Force Awakens,” which opened Friday.

“‘Star Wars’ picks up religious images, including Christian images and maybe some from other religions,” said Ludewig. “In doing so, it shows that the Bible and the Church are part of our culture that keeps being reworked and reinterpreted.”

Churchgoer Jonathan Wonneberger, dressed as a Jawa trader, described the service as a welcome change from tradition.

“You don’t have to take everything that’s religious too seriously. Of course you have to treat it with respect, but when there’s a global event like Star Wars, it’s ok to jump on the bandwagon,” he said.

“I think the whole question of God is very interesting, but getting up early on a Sunday is one of those things. But for something like this, I’ll go,” he said.