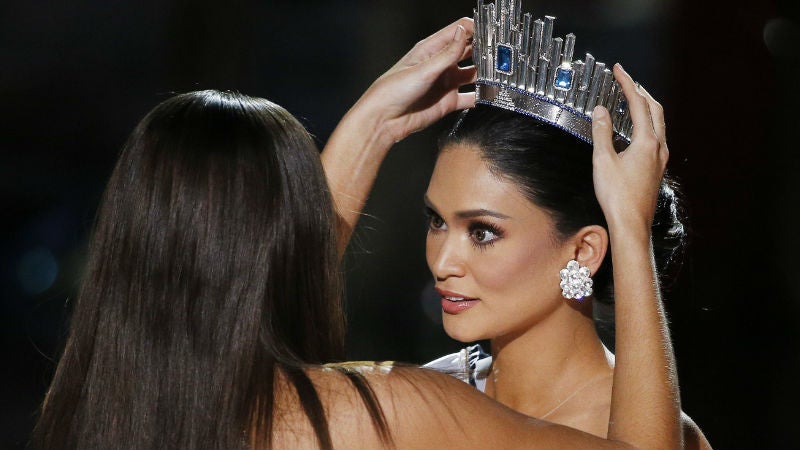 “Kalma lang guys. Ako bahala. Babawi tayo sa Miss Universe!! (Relax guys. Leave it to me. We’ll get even at the Miss Universe pageant!!)” she posted on May 3.

Fast forward to Dec. 21, Wurtzbach took home the crown after answering a question about American presence in the Philippines and what it takes for a candidate to become Miss Universe.

Before joining the Top 3, Wurtzbach was asked about her thoughts on US military presence in the Philippines.

“I think that the United States and the Philippines have always had a good relationship with each other. We were colonized by the Americans and we have their culture in our traditions even up to this day. I think that we’re very welcoming with the Americans and I don’t see any problem with that at all,” she answered in Las Vegas.

The newly crowned Miss Universe’s answer made some netizens squirm in their seats.

“Congratulations, @piawurtzbach! You are regal. But from what I’ve heard, we need to talk. See you! #MissUniverse2015,” tweeted Sen. Miriam Defensor-Santiago.

“Parang calculated yung ‘US bases’ question to elicit a YES answer, considering the pressure on contestants, US home court #MissUniverse2015,” he tweeted. “I don’t think the question was even fair. Saying NO to US troops in front of a US crowd would sink her chances. #MissUniverse2015.”

Former Bayan Muna Rep. Teddy Casiño had this to say about Wurtzbach’s answer.   “She could have at least acknowledged that there are problems that have to be addressed re US bases in PH. #MissUniverse2015,” he said.

Netizen Heidina saw nothing wrong with the beauty queen’s stand on US military presence in the country. “@MissUniverse panel: “Havin d return of US bases in d PH” Ms Philippines: “I don’t c any prob w/that @ all. Some PH politicians see any prob.”

For netizen Emee Julian, Wurtzbach’s answer was a calculated one.

For the rest of the Filipino Twitterverse, her victory has been pretty much talked about.

The hashtag, #MissUniverse2015 was trending during the duration of the competition.

Moments before emerging as the new Miss Universe, Wurtzbach was “mistakenly” announced by host Steve Harvey as the first runner-up. Ariadna Gutierrez, who represented Colombia, wore the crown for a few minutes after Harvey announced his mistake on a live TV.

“Even @PiaWurtzbach was dumbfounded. And Miss Colombia didn’t want to give the crown. WHAT WAS THAT???????!!!! #MissUniverse2015,” said “eventologist” Tim Yap.

“I have witnessed the most awkward 5 minutes of 2015 on TV ?? #MissUniverse2015 #ColombiaZoned,” said netizen Nadine.

“That @PiaWurtzbach was gracious about a defeat-turned-victory—that is the mark of a true winner,” said broadcast journalist Pia Pagkalinawan.

For a certain fatzikins, these were his thoughts about the televised snafu. “That awkward moment when the crown is taken away 5 minutes after your ‘win’ #missuniverse #philippines,” he tweeted.

Unknown to many, before winning the Miss Universe crown, Wurtzbach spent time as a writer and stylist for the Philippine Daily Inquirer’s Lifestyle section.