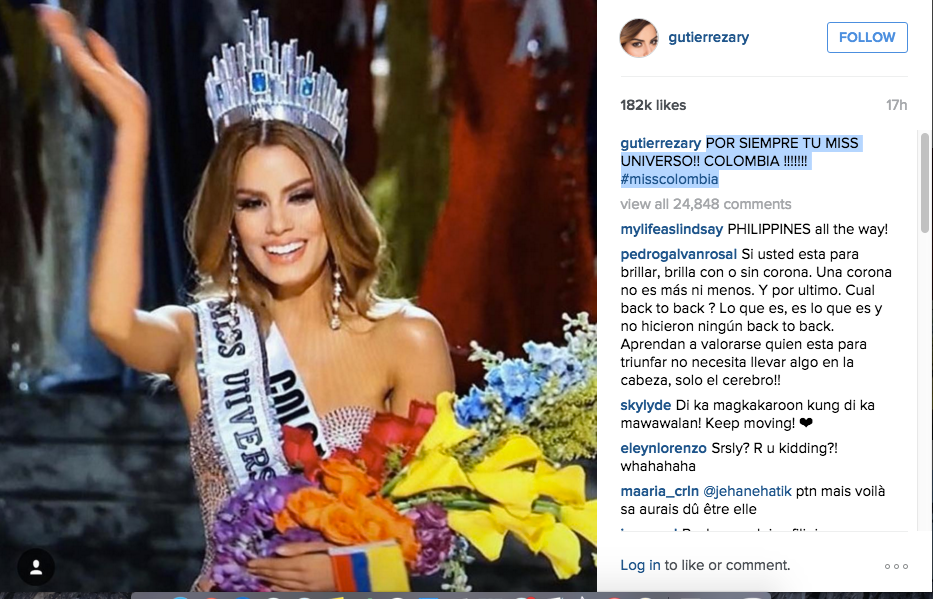 After apologies have been given and the rightful winner of the Miss Universe 2015 pageant has been crowned, Miss Universe first runner-up and Colombia’s representative Ariadna Gutierrez posted photos of her with the crown during her “reign,” which lasted a few minutes.

Meanwhile, the second photo showed her jubilant moment with fellow Colombian and Miss Universe 2014 Paulina Vega as they relished what would have been a back-to-back win for their country.

“(These) moments will always be with me #missuniverse#misscolombia #backtoback Lo logramos COLOMBIA!” she said.

Reactions to her posts were mixed as some supporters gave congratulatory messages to the 21-year-old Colombian beauty while some slammed her for supposedly being insensitive to the actual winner, Philippines’ Pia Alonzo Wurtzbach.

Gutierrez was able to wear the Miss Universe crown and sash after pageant host Steve Harvey incorrectly announced that she was the new Miss Universe. She was already giving flying kisses to the audience when Harvey came back to the stage and said that it was Wurtzbach who won the pageant.

Some netizens poked fun in the awkward situation and said that Gutierrez had the shortest “reign” as Miss Universe: lasting only for four minutes.

The Colombian beauty has already broken her silence on the mix-up, saying that “everything happens for a reason.” AJH