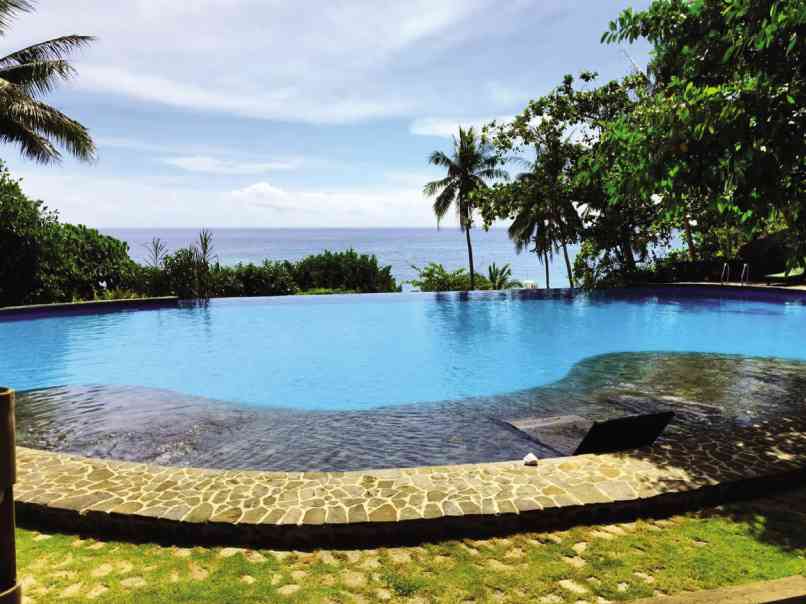 VIEW from the dining room

BENEATH the horizon, the sea is like a plane of ice—unmoving, streaked with shards of deeper blue and clear azure, like icicles. Close by, it streams, breaking gently on the sand and leaving a few foamy bubbles and hermit crabs scuttling in its wake.

Other than the rhythmic crash that echoes along the brief cove, there is scarcely any sound. It is high noon, far too hot to go into the water to swim or snorkel. Besides, it’s time for lunch.

After having a good share of beach life in the past, I now like it quiet rather than crowded, and my moments with the sea, introspective. For years my favorite spot to escape was Isla Naburot off the coast of Guimaras near Iloilo, where there is no electricity and you sleep under a mosquito net, and food is cooked over charcoal fires.

These days there is mobile phone coverage and demographic sprawl along Guimaras, meaning that the island is a lot less remote than it used to be. When I first visited in the 1990s it was like being lost, which is such a wonderful, terrifying feeling that exceeds the excitement of any adrenaline rush.

The difficulty of the journey and the isolation are part of the fun, and I would still recommend it to the young and sprightly, although I haven’t been back for some time.

Meanwhile, we were looking for a place to go with two children that wouldn’t feel sterile and packaged. I also can’t stand the food at most resorts; although I’ve enjoyed my time at Shangri-La and El Nido, the repetitiveness of the catering-style food drives me insane. There’s nothing so depressing as coming up from a swim or snorkel in waters that show the amazing diversity and color of ocean life, and then facing a bleak, tepid chunk of defrosted tuna that has dried out on the grill.

My friends recommended I check out Amun Ini in Bohol, and because I trust them I booked rooms for my family and a flight to Tagbilaran. We were off in time to escape the madness of the Christmas crunch.

Everyone says that Bohol, especially Panglao Island, is the new Boracay; but we wouldn’t know. At the airport we were welcomed and whisked off in a van to the town of Anda, on the other side of Bohol. It’s about 100 kilometers or an hour-and-a-half drive, which sounds far but it’s a pleasant drive, on good roads, with old churches whizzing past on one side and the ever-changing sea, lined with mangroves, on the other.

The food and the hospitality are what make the place. There’s an extensive drinks list, an interesting wine list, and an adventurous menu that veers sharply away from the usual grilled seafood and steak fare.

Like some good restaurants in Manila, it uses a lot of local ingredients (including the Malagos cheeses), pasta with fresh basil from the garden, house-cured bacon and one of the better exemplars of sourdough bread I’ve had locally. The fish is mostly sourced from Mindanao, where the waters are less exploited.

The dishes on the menu are filling but not leaden in the stomach, with lots of beans, slaw and mashed squash; there’s only brown rice, but it’s a nice grain that’s easy to digest. And best of all, the young couple who run the kitchen can make anything for you as long as the ingredients are available; this is in addition to the daily specials.

They are the daughter and son-in-law of the owners, Freddie and Karen, who run the place like their own house. At least four very friendly dogs roam around the resort, lying on their backs and waiting for tummy rubs, or loping down to the sea to jump into the water and swim out into the shallows.

At the time we went, there were about two other couples staying at the resort, but mostly everyone did their own thing.

My daughter commandeered the swimming pool, my wife went kayaking, and I finally managed to get a bit of reading by the chairs facing the sea.

As long as you aren’t looking to jet-ski or paraglide, or to pick up people for casual sex on the beach, I heartily recommend the place. The amenities are excellent, the service is top-notch, and the food is better than most restaurants that are opening in Manila.

There are places that are more isolated or serve more rustic food, but they don’t come with telepathic service and fast WiFi. For warmth of welcome and secluded charm, this is a quirky resort that’s worth the trip.