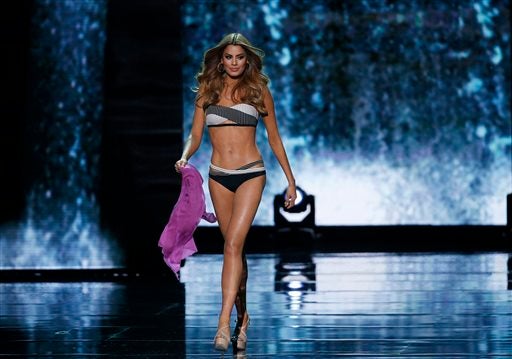 Miss Colombia offered up to $1M to do sex tapes—report

In a letter published on TMZ on Wednesday, Vivid Entertainment Inc. founder and co-CEO Steven Hirsch made his “serious” pitch to Gutierrez through writing to the Miss Universe Organization.

Hirsch said in his letter that he closely followed the unfortunate incident last Monday (Philippine time) where Gutierrez was wrongly crowned as the winner of the prestigious pageant.

“I have followed closely the debacle which you unfortunately were part of. That would have been an enjoyable evening,” he said.

Hirsch said that his offer would help the 21-year-old Colombian beauty financially and that it would increase her fame “way past that of the new Miss Universe.”

If Gutierrez agrees to sign up with Vivid, she can pick her partners and how many movies she would make, the Vivid Entertainment founder said.

“Here’s my idea. I will pay you up to $1 million to both make movies for and represent Vivid Entertainment. You will pick your partners, the type of sex you want to have and how many movies you ultimately appear in,” Hirsch said.

To make his pitch to Gutierrez more convincing, he even cited the case of actress Vanessa Williams who was stripped of her Miss America 1984 title due to the publication of her old nude photos. Williams then became an accomplished actress and singer.

“Today Vanessa is an accomplished actress, singer and author. She has even admitted that the incident with Penthouse helped rather than hurt her career” Hirsch wrote.

Hirsch even added a “Vivid Girl” crown—a crown “grander than anything Miss Philippines would ever wear”—into the list of perks that Gutierrez might get if she agrees to sign up with the adult entertainment company.

In the end, Hirsch urged the Colombian beauty queen to think about his offer, promising that it would “make up for any fame and fortune you might get as Miss Universe.”

“I can promise you that you will definitely be remembered,” he wrote.

Vivid Entertainment has released the sex tapes of some Hollywood celebrities such as Kim Kardashian, Kendra Wilkinson, and Pamela Anderson. AJH/IDL