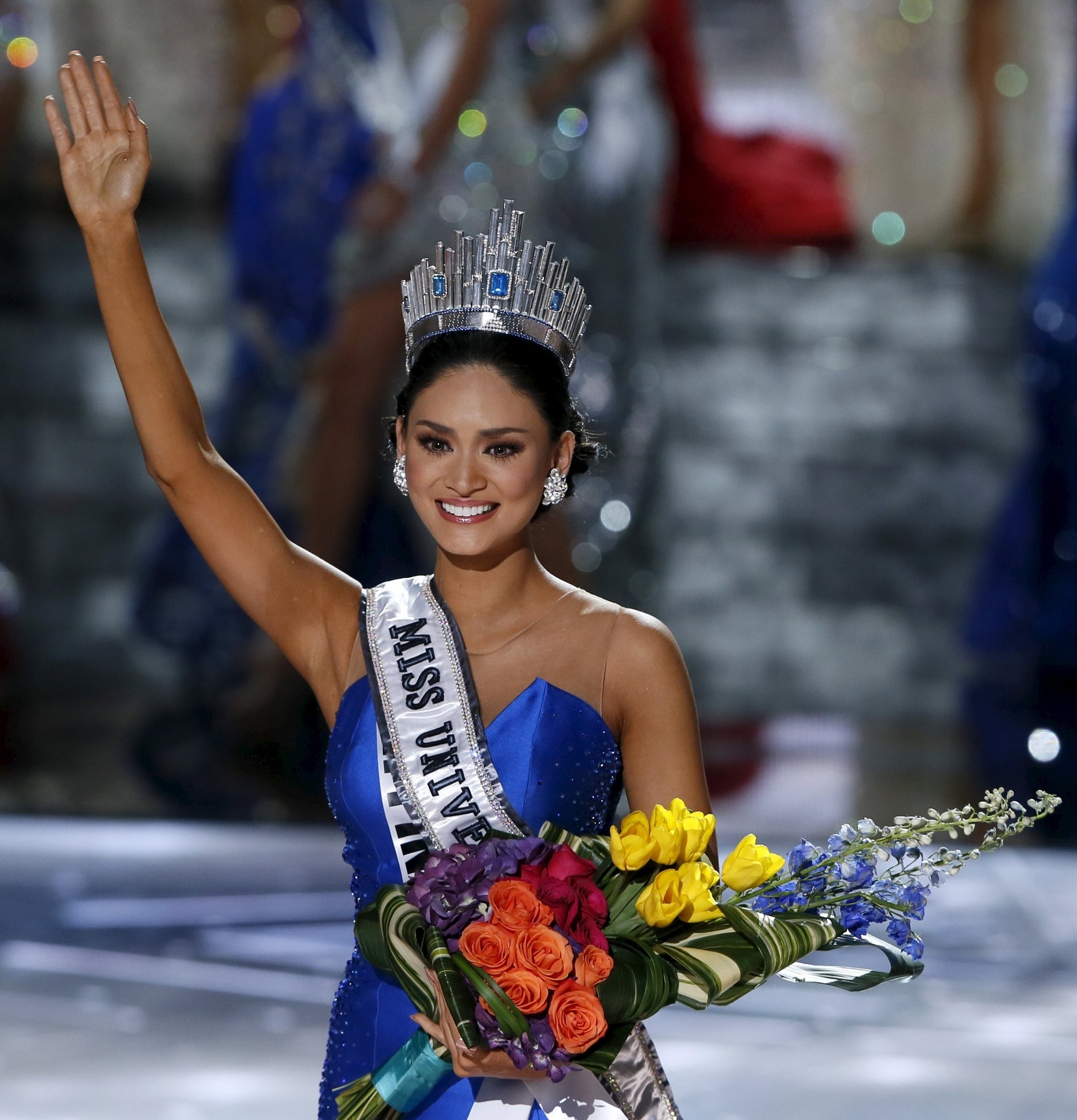 THE SMILE on that face bears no hint of the stress she’s gone through and the hard work she put in.

(This is a first-person account by one of Manila’s leading marketing practitioners and event organizers–Close-Up’s Lovapalooza, Vaseline Christmas, Metrowear, among others–who paid his way to Las Vegas just to watch Pia Wurtzbach fight for the Miss Universe crown. Obviously, he is a beau-con fan.—Editor)

At the predeparture presscon for Pia Wurtzbach, I was impressed with her spunk and articulateness. Asked why she joined the Binibining Pilipinas 2015 pageant for the third time after losing twice, she simply said, “I just want peace of mind.”

As for her chances, she said, “I can see the color blue with ice and I want it in silver. I think it’s called a crown.”

Before the presscon, we saw her in the makeup and waiting room. Pia was crying among friends; she said the pageant officials were angry last night as she was late for rehearsal. She was not feeling well.

I told myself only a strong person could withstand this environment; add to that the strict and exacting standards of queenmaker Jonas Gaffud.

At the presscon, Pia’s co-beauty queens gave farewell messages and she started to cry—I think due to the raw emotions and pressure on her. But I had a strong hunch that this articulate, intelligent and beautiful girl is made of sterner stuff.

I arrived in Vegas with Pia’s close friends on Dec. 14. We spoke with her the following day; we got worried as there was no evening gown she could wear to the preliminaries, except the Cumbia gowns which were too big for her.

I messaged Marina Benipayo on Facebook, asking for names of possible designers near Vegas. She mentioned Veejay Floresca and Oliver Tolentino, and sent messages to them.

Jonas admitted he had asked Bianca Guidotti, Binibining Pilipinas 2014 and Pia’s close friend based in Los Angeles, to pass by Oliver’s Beverly Hills shop to pick up nine gowns that he had borrowed. Binibining Pilipinas Charities Inc. head Stella Marquez-Araneta was arriving later in the evening, and he still needed to get her approval for the gown.

Oliver’s gowns arrived at 6 p.m. When Pia tried them on, the consensus was for the red gown.

Mrs. Araneta arrived Dec. 15 and got the surprise of her life when she learned that Albert Andrada’s gown was nowhere. It was supposed to have arrived that same day with Albert, but she approved the royal blue frock only last Dec. 9—seven days before the preliminaries.

Albert said he thought it was for the finals and not the preliminaries. Panic mode.

Mrs. Araneta brought out the Cumbia gowns and wanted the black-and-white gown. Jonas and Pia asked if she could wear Oliver’s red gown. Mrs. Araneta raised her concern that this was all planned, just like what Binibining Pilipinas International Janicel Lubina did when she wore a gown of her choice but not approved by Mrs. Araneta (though she won in best gown).

Even ABS-CBN’s Dyan Castillejo, who was nearby, got roped in. She told Dyan it could be a “conspiracy! I knew that you met for an hour with Pia, according to my assistant.”

Dyan said, “Yes I met with her, but to share the Bible with her and not about the gown.”

Jonas was in tears.

As a compromise, Pia was asked to show Mrs. Araneta the two gowns.

Eventually, she told Pia it was her choice.

Everybody stayed up late, as all these matters were settled past midnight.

At the Dec. 16 preliminaries, candidates would be judged based on swimwear and evening gown.

Pia’s friend Harley Tan was in touch with Albert, who said he just arrived in Los Angeles.

The rest is history.

Pia did well in the prelims, appearing composed and confident despite the stress she had been through. Talk of strength, focus and mental toughness.

The followings days were a whirl of pictorials and visits to sponsors. Pia was always chosen for these activities.

Dec. 18 and 19 were rehearsal days, and Albert’s royal blue gown was unveiled—the color was Pia’s favorite.

There were other sources of panic: The live votes of global fans represented the fifth judge, or 20 percent of the total, to determine the Top 10, then the Top 5 and then Top 3, after which it would be the judges’ decision.

Dyan admitted that ABS-CBN’s coverage was not live and delayed. The vote had to be live for every part—national costume, swimwear, evening wear and Top 5 Q&A. There was also the slow Internet service in the Philippines.

Our frantic, last-ditch measures included appeals on social media, the printing of flyers and calling on all Filipinos across the world to vote.

When Pia’s sister Sarah Wurtzbach and her fiance arrived and stayed at Planet Hollywood, the whole support group for Pia’s big day was in place.

I was no candidate, but I was not able to sleep the night before. We could feel the tension and excitement building up during rehearsals, which was well-attended by the Filipino support group.

Pia said she was more excited than tense. Wow, this girl is really something else. She looked happy and was smiling more often during the judges’ screenings and interviews.

Panic time again. Seated, with our Philippine flags, as the program was about to start, we realized we could not get an Internet connection. We ourselves could not vote!

The national costume segment went well. Pia glided in her Albert Andrada Carnival Queen-inspired gown. Every time she appeared, the crowd roared. Even if she was not on stage, they were chanting, “Pia! Pia! Pia!”

In the Top 10 elimination, she was eighth. Before that, the crowd was silent. We started to pray and stare at each other. My blood pressure started to shoot up, while my friend Patrick Ace Bright complained of a headache and said he could feel his heart palpitating.

When Pia’s name was called, pandemonium broke out; we were hugging the nearest person. A Filipino woman I did not know was embracing me, and we felt like one nation supporting Pia.

The Top 5 segment was a breeze. The Q&A was in her favor, and we could see on the screen in front of us that she was leading the global vote.

By this time, nobody left our seats anymore. Sarah Wurtzbach and Niña Almoro were seated nearby. Niña had a whistle, and every time the audience was silent she would suddenly shout, “Pia, we love you!” That cheer would build up again: “Pia, Pia, Pia!”

The Top 3. We were confident she would land on the list, so we got scared when her name had not been called. USA, Colombia—oh, no. Tension at its highest. Fear. Tension. Pressure. Blood pressure shooting up. Strong palpitations and tears about to fall.

Then, the host blurted: “Miss Philippines!” Oh my God. It was then I realized she would win Miss Universe.

The Q&A happened to be her strong point. We had heard Misses USA and Colombia answer the top questions, and I was not impressed. Long and standard answers, no wit and charm, no punch lines.

But Pia? True enough, when asked why she would make a good Miss Universe, she ended her short and direct answer with, “I’m confidently beautiful with a heart.”

Now I was shouting, “OMG she will win Miss Universe!” Every Filipino in the crowd, and the Fil-Americans, too, were cheering both USA and the Philippines. The Mexican people seated in our section were cheering for our bet.

Then Miss USA was called as second runner-up. We knew Pia would win! But Steve Harvey next called Miss Colombia as the new Miss Universe.

Pia was whisked off center stage and Miss Colombia began walking with the crown on her head, blowing kisses to the crowd.

After what felt like an eternity, we saw Steve come back up and haltingly say, “I’m sorry, there was a mistake. Miss Colombia is first runner-up, and Miss Universe 2015 is Miss Philippines!”

The crowd absolutely went wild (See my video on Lifestyle.net). Cheers, tears, people hugging each other all around—it was like the Edsa Revolution!

While everyone was happy and celebrating, Miss Colombia took some time to understand what was happening. She just stood there with the crown and sash. Miss USA then whispered to Pia that she was, in fact, Miss Universe, and Pia walked forward again.

Some people were chanting, “Colombia! Colombia!” But we were answering, “Philippines! Philippines!” as loudly as we could. People did not want to leave. The Latinas congregated around Miss Colombia who was sobbing, while all the Asian and European candidates joined Miss USA in congratulating Pia.

It became a rather tense situation; the stage was full of people, and security started to ask everyone to vacate the venue except those with IDs and accreditation. The voiceover, meanwhile, kept repeating the organizers’ apologies for Steve Harvey’s mistake.

We were delirious as we spilled onto the foyer. I saw Jonas and asked him for his comment. He said, “I was in the restroom when Miss Colombia was announced Miss Universe. I froze and prayed for a miracle. When I entered the venue, it was suddenly announced that the Miss Universe is Miss Philippines! I realized miracles do come true!”

At the foyer, I saw Mrs. Araneta and asked her how she felt. “I am as happy as you are!” she said, pointing to me and the Filipinos around who were all smiles and talking animatedly.

The Latinos were also nearby, and we were just waiting for a fight to break. But the ending was, as I walked to where Pia’s presscon was being held, I suddenly remembered how to breathe regularly.

It was a week of panic, drama, tears, stress and sleepless nights. I realized that pageants are more than a parade of beauties. It was drama, politics, comedy, strategies and friendship.

It dawned on me that it could actually be a unifying factor, a way to gather diverse groups of Filipinos into cheering in unison for the Philippines.

One thing was sure—we held our Philippine flags with pride, with honor and with our heads held high. It was a night when we were all proud to be Filipinos.

Thank you, Pia Wurtzbach, for this feeling! Thank you for your Christmas gift that came in red, silver and royal blue, with a shining Miss Universe crown to go with it!

Yes, it will be a merry, merry Christmas in the Philippines!