Flashback: The times of their lives | Lifestyle.INQ ❮ ❯ 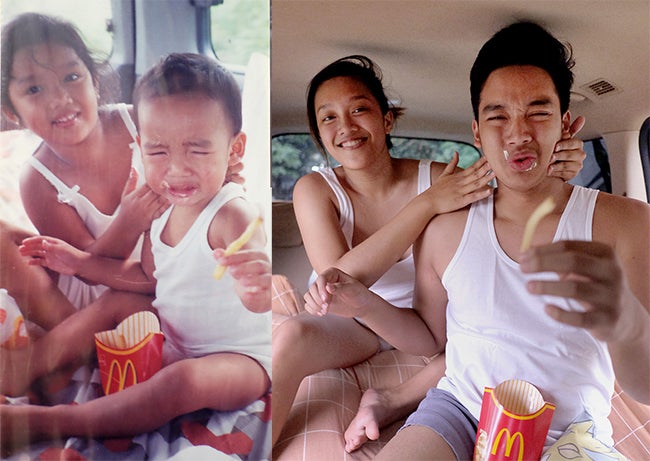 Flashback: The times of their lives

The holidays are sweeter when shared with loved ones. This Christmas, Super celebrates relationships that have stood the test of time—a mother and her two sons, two siblings, high school classmates who became husband and wife, and college group mates who became sweethearts—all recreating memorable moments from their past.

“Somebody up there must love me for giving me two wonderful boys [Martin and Ralph Tee Ten],” said Ruby Gan, an entrepreneur, marathoner, fitness enthusiast and who’s also training to be an indoor cycling instructor. “Now that the boys are all grown, we are like a barkada—we go out together, do things together. We consult each other for ideas and opinions.”

Firstborn Martin, an assistant manager at Bridgestone Tire Center Alabang, pointed out that their strong relationship is rooted in the way his mom brought them up. “Mom helped me with a lot of things… She didn’t sit me down and watch over me, it was more of a ‘why don’t you try and do it this way’ approach. I guess it’s also how we stayed close. She would listen to me and then suggest ways on I can accomplish certain things… I know she’s there for me and she knows I’m here for her.”

Younger son Ralph, a marketing associate, agreed: “I think the central thing that we do to stay close is keep open lines between one another and constantly do things that include the three of us.”

They do enjoy one another’s company; they like watching movies, dining out and shopping.

Ruby said, “I like Martin’s sense of humor. Ralph, on the other hand, is so sweet. Together they’re a riot! When we go out, there’s never a boring moment… These moments are priceless.”

They love exploring the world together, too. Martin said, “We appreciate a quiet night of staying in, drinking wine and watching whatever movie we have, but we also take trips abroad.”

The three recalled how they recently had to run to catch a flight to Hong Kong that they almost missed. “If you remember that scene in Jurassic Park where there were packs of dinosaurs running after their prey, I think we recreated it perfectly,” said Ruby.

They may be close and she may be a fun mom but Ruby also knows when to put her foot down. “Above all this, they still know that I’m the mom. They give me the respect that’s due me and I appreciate them for this,” she said.

Ralph noted, “What I love about my mom is that she’s persistent and is a go-getter. I believe she can get or do anything she wants as long as she really wants it.”

And Ruby wants her kids to be as active and driven as she is.

“It wouldn’t be home if there wasn’t a constant battle of her getting me to move and me not wanting to move. It’s crazy but that is probably what I like about her,” said Martin.

Martin and Ralph are close, too. Martin said, “Although I’m two years older than him, I usually don’t see him as younger than me. The only time that I remember I’m older is when laundry needs to be done, or there’s cleaning involved. I would ask him if what I did was right or wrong. I also told him to call me out on anything I might be doing wrong.”

Ralph said, “What I love about my brother is that he’s always there for me, he always has my back.”

They even manage to find ways to enjoy getting stuck in traffic on their way to work. “We listen to a random playlist and try to name the songs,” said Martin. “We have rock-out sessions in the car. We also play against each other on the Playstation. I have the winning streak on NBA 2k16, Ralph has the winning streak on Call of Duty: Black Ops 3.”

For this family, Christmas will be a party of three. Ralph said, “This year, we’re probably going to spend Christmas together at home, watching movies. Hopefully with a fully stocked fridge and cupboard full of chips and chocolates.”

Ruby: “I would give Ralph a Lamy fountain pen because he’s crazy about pens! For Martin, books and comics. He’s really a kid at heart.”

Martin: “I would give mom a Paint By Numbers set. She’s been eyeing that set since two or three years ago. Besides, what else would you give someone who can definitely tell the difference between teal, turquoise and aqua? I would give Ralph comics. Either the new “Thor” series or the “Saga” series. He loves reading comics, loves Norse mythology (hence, Thor), and I gave him the first issue of “Saga” two years back, loved it, and has been reading the new issues since.”

Ralph: “I’d get my brother a really nice pen. One of those Lamy pens with good weight and a good size for his hand, then some comics to go along with it or YA [young adult] novels. He really likes to read. The pen because I think there’s a lot more in store for him in the future. For my mom, I’d get her stationery or those new Kate Spade planners she was talking about the other day and some calligraphy or writing equipment. I picked these for her because she really likes writing and giving things a personal touch and that definitely would do it in the personal touch department.”

Counting on each other

“I will remember 2015 as the year I strongly began to believe in the saying, ‘If there is a will, there is a way,’ said student Janna Lejano

And when things get difficult, she has her siblings to count on, too, including her brother Jaggy.

“My relationship with my brother is tight,” said Janna. We have each other’s back that’s for sure.”

Janna, Jaggy and their other siblings are all looking forward to Christmas.

“I will celebrate the holidays by stuffing my face with food 24/7,” Janna said. “I would give my brother a scientific calculator. He’s going to need it in college.”

Jaggy: “I would give my sister a Total Girl magazine.”

A photo of Rob de Villa, an entrepreneur, and his wife Tash, an editorial production assistant, slow dancing at their high school graduation ball is a rare one. “It’s the only one we have of just the two of us when we were younger,” said Tash. “Most people who knew us back then were aware that I spent a lot of time avoiding him and his giant stuffed toy gifts.”

She added, “I was a rather uncooperative dance partner. I hardly talked to him and would only touch him with the tip of my fingers. What he didn’t know at the time was that I thought he was the best-dressed guy, with his classic three-piece suit and tie amid a sea of hip-hop wear. Much to my chagrin, he somehow managed to be my first dance at all our high school dances. Who would have thought he’d also end up being my first, only and last love?”

Rob and Tash were both 13 years old when they met, 23 when they became a couple, and 33 when they got married.

“We’re kind of old school, we didn’t even impose a hashtag for our wedding,” Tash said.

Since it’s their first Christmas as husband and wife, logistics had to be ironed out. “We’ve figured it out,” Tash said. “We’ll be with his family for Simbang Gabi, then with my family for noche buena.”

But the gifts will have to wait. “We haven’t figured that part out yet,” Tash admitted. “We’re planning our honeymoon, so maybe something from our trip.”

The relationship between photographer Jilson Seckler Tiu and writer Alyosha Robillos was unexpected.

“Nobody, literally no one, not even ourselves, saw it coming,” said Alyosha. “People generally wrote us off as one of those ‘meantime couples,’ but it’s been almost five years and sparks are still flying. We’re best of friends, really. And we have great professional chemistry, too.”

She and Jilson met one summer in college as members of the same organization.

2015 was a busy year for both. “It was tough for us because we had so much going on and there were times when work-life balance had become a sore subject,” recalled Alyosha. “So probably what we’ll remember is just getting through the year unscathed and possibly stronger as individuals and as a couple.”

And the holidays were just as busy for the two. “It’s the end of the year, definitely crunch time,” she said. “We’re trying to make the last few days of 2015 as productive as possible. That and Christmas shopping!”

Alyosha and Jilson usually celebrate Christmas with their respective families. “But we always see each other on Christmas Day,” she noted. “That’s four Christmases and counting!”

She said, “I’d probably give Jilson some art materials because he misses painting and sketching.”

Jilson: “I will give her a Moleskine notebook so we can draw and write on them since gusto namin mag-drawing at mag-lokohan through doodling. This is something we do when we’re with each other: one brings out a pen and some paper and then we doodle away over a cup of coffee. And we can also use the notebooks to record our moments together.”