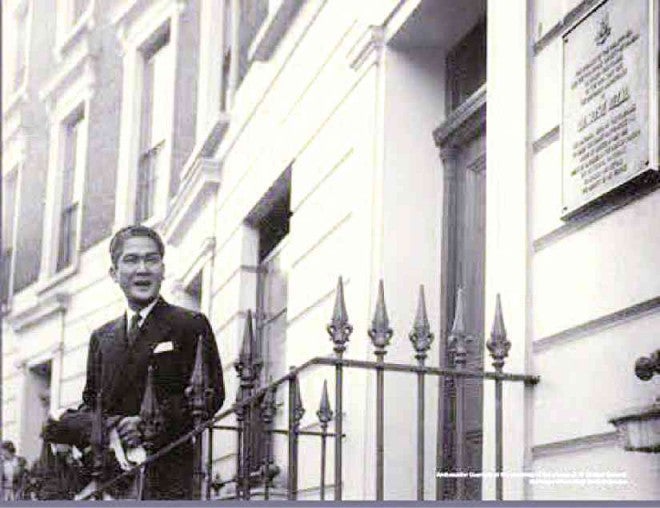 LEÓN Maria Guerrero was ambassador to the Court of St. James. INQUIRER.NET

Leoni, as he was called by relatives and friends, gathered in himself several strands of influence. He was a Filipino nationalist, an ardent Rizalist, an English stylist, a Hispanist, a Latinist, an Atenean.

Fluent in Spanish, he wrote a prize-winning book, “El Si y el No.” Most of his writing was done in English, however, and his effortless elegance in English prose made him the envy of other writers, all the more so since it was said he never needed more than one draft. He would sit at a typewriter and deliver a final product without amendments or corrections.

Leoni’s mastery of language was not merely facile but display of sharp wit and deep thought. Few could match him intellectually.

One of them was his classmate, the brilliant historian Horacio de la Costa, S.J. (nicknamed Skeezix by his close friends from a supposed similarity to a cartoon-strip character).

Leoni enjoyed naughtily tossing heterodox ideas into social conversations that would annoy lesser intellects, which meant nearly everyone else present. Their usual reaction was to say, “De la Costa can answer that.” This was quite annoying to Leoni.

As a radio newscaster, Leoni’s deep and rich baritone and his excellent diction were a pleasure to listen to.

Our families had been friends for generations, and our family physician was Dr. Luis Guerrero, a sharp-eyed diagnostician. Although I already knew Leoni socially, I got to know him much better on a trade mission to Germany in 1955.

The Philippine Senate had decided to send Sen. Felixberto Verano to explore commercial links with West Germany, with which we did not yet have formal diplomatic ties. Someone of ambassadorial rank had to head the mission, and Leoni, then stationed in London, was chosen.

An economist was also needed, and I was called away from my doctoral studies by the Central Bank and instructed to join the mission in London. (It was an inconvenient moment, because my draft dissertation was with a typist, but had to be bound, and submitted to my thesis readers. I faced a delay in getting my degree, but I called on the late O.D. Corpuz, who was also at Harvard at that time, to quickly look at the draft and take it to the bindery. This worked, and I got my degree that year, for which I am deeply grateful to O.D.)

During our month’s stay in Germany, I became aware of Leoni’s wholehearted devotion to Rizal. We took time off to go to Heidelberg (where Rizal wrote his famous poem “To the Flowers of Heidelberg”) and we went to   nearby Wilhemsfeld and called on the resident pastor at the Lutheran rectory, where Rizal had been hosted by Pastor Ullmer in his student days.

I don’t think the visits to Rizal-connected locations were a sudden impulse on Leoni’s part. He might have been pondering this idea for some time and the mission to Germany probably started him on a systematic identification of Rizalian places. ( I am not sure he was the only one who conceived this and thought of placing markers there. Others probably did their share in the effort.)

We made a Sunday visit to Charlemagne’s capital of Aachen, where we heard the German boys reacting to Leoni’s slim and dark good looks with whispers of “Zigeuner,Zigeuner.” (Gypsy, Gypsy).

It was also on this mission that Leoni displayed his Atenean Latinism (at that time Latin was still taught) by being very interested in Latin words still used for student facilities, like mensa for the dinning hall. He enjoyed being able to cite Latin terms and be understood by our German counterparts who all had a classical education.

In social moments, he particularly enjoyed the student song “Gaudeamus Igitur,” especially the verse that went “Vivant omnes virgines, faciles formosae” (Hail to all the virgins, easy and lovely).

Part of Leoni’s Ateneo experience was his recollection of lectures given by the erudite Don Norberto Romualdez on Philippine folk music which he illustrated by playing the piano himself.

Traveling as a diplomat called attention to his position, but when he wanted privacy, he chose to travel incognito, and he would use his middle name of “Ma” as his family name. Thus at a German hotel the messenger boy went around paging “Herr Ma! Herr Ma!” He told me that on other occasions he had registered as Hideki Nakajima.

Leoni had his share of human frailties. One of them was a liking for alcohol. Originally he went for whiskey, but in his later years he switched to vodka.

In my last visit to his diplomatic post (Belgrade, where a monetary conference was being held), I gave him a bottle of powerful 112-proof (56 percent alcohol ) vodka I had found in a duty-free shop. He was duly appreciative, although I wondered if it was wise to have indulged his taste for alcohol. It was the last time I saw him.

Leoni translated into English Rizal’s two novels, and wrote a prize-winning biography “The First Filipino.” That legacy is safe.

But I was told by his sister Carmen (Chitang) that many of his shorter works were destroyed by fire. One thinks of major articles with titles like “The Passion and Death of the USAFFE” and “Twilight in Tokyo,” and wonders if master copies exist somewhere.

This is a pity. I hope people who may have clipped some of his pieces (speeches, magazine and newspaper articles) will come forward and provide xerox copies to his heirs. These shorter articles and speeches could be compiled and published, thus enriching our literary heritage.