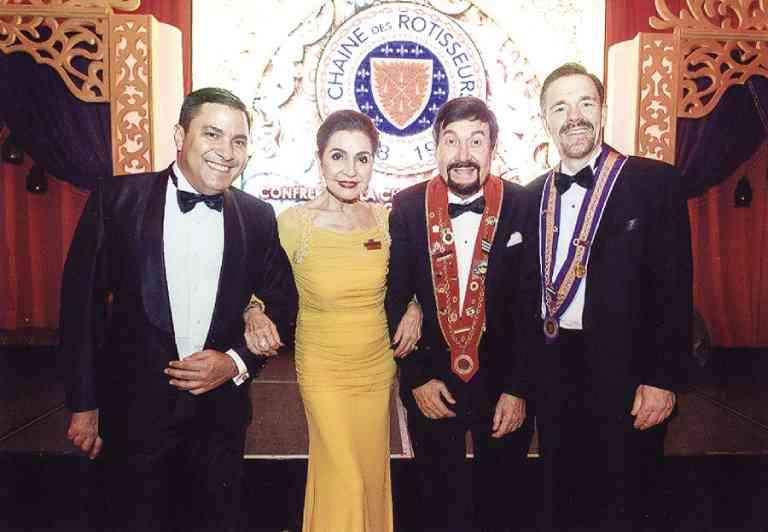 IT WAS a night of scintillating Oriental splendor when the Cebu chapter of La Chaine des Rotisseurs held its anniversary gala at the Cebu City Marriott Hotel. General manager Patrick Carroll had chosen the theme Quintessential India from the gastronomic point of view, of course.

Patrick flew in expert chef for Indian cuisine Alam Singh from the Bangkok Marriott Hotel Sukhumvit for a food tasting. As it happens, La Chaine’s Baili Delegue for the Philippines, Michel Lhuillier does not eat spicy food. There were others who were equally apprehensive.

The food tasting, presided by Baili de Cebu Amparito Lhuillier, dispelled those concerns as chef Singh prepared a menu that was deliciously flavored, and whatever spice there could have been did not in any way overpower the natural taste of the elaborate menu listing.

Predinner cocktails and substantial morsels of exotic food were served at the foyer of the Marriott’s ballroom, decorated with Indian themes and silken curtains that parted when everyone was asked to come into the splendidly adorned hall.

Swaths of vivid reds, oranges and purples flowed from the ceiling, as well as countless Swarovski beads and prisms that sparkled like diamonds in some maharajah’s throne room. Truly, it was quite a scene.

As we said, the star of the evening was the menu. Delicious appetizers were served, followed by a tomato soup with roasted cumin seeds and coriander leaves. The rest of the dishes were put on our plates by waiters wearing bejeweled turbans.

There were oohs and ahhs for the char-grilled chicken, lamb chops cooked in a blend of spices, madras tiger prawns in curry, basmati rice with green peas, and the cucumber raita.

Dessert was something new: a pudding made with carrots and reduced milk. It did look like a scoop of ice cream. To conclude, there was Masala tea with fresh milk, ginger and Indian spices.

After the dinner, the board of directors lined up on the dais with Michel and Amparito to present the certificates of appreciation to Carroll, Singh, Cebu Marriott’s executive chef Chachpoi Suaison who is from Thailand; food and beverage manager Lyle Kevin Cajayon; and events manager Jackie Zamora.

Tables for eight had been set up, with a member of the board presiding each one. With Michel and Amparito sat Carroll, La Chaine’s Baili de Manille Federico Borromeo, who came expressly for the occasion with his wife Josephine, Jose Antonio Nigro, Thibaut Lallement, Christophe and Virginie Caligaro.

Teresin Mendezona sat with Marguerite Lhuillier, Gladys Young who was wearing a cluster of colored gems of her own design, Joel del Prado, Carlo Cordaro, and Jonathan Co from Manila.

Dr. Nestor Alonso came with his wife Jojie, who wore a dazzling sari and authentic Indian jewelry. With them were Michael and Bethilda Smith, Mariter Klepp, Gemma Buxton, Zaida Lee and Dolores Rimaz.

The evening was enlivened with Indian dances by the group of Val Sandiego. DJ Bong Suzara was around to give the dance music for everyone. Watching the evening’s flow from the wings were marketing communications manager Frances Alfafara and press relations officer Nico Velasquez.