‘She had a knack for creating families wherever she went’ | Lifestyle.INQ ❮ ❯ 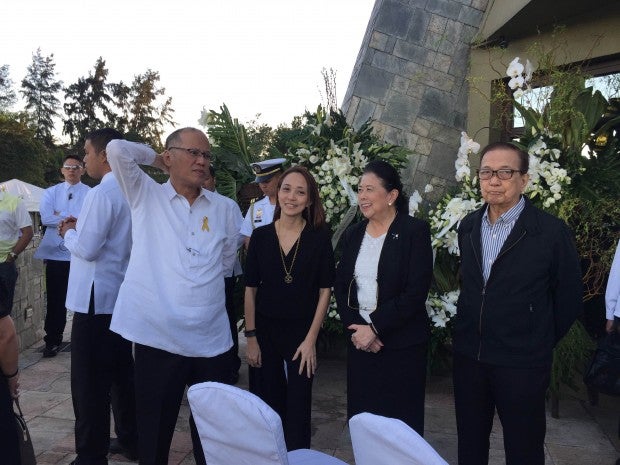 ‘She had a knack for creating families wherever she went’

Under a crisp night sky, and braving the chilly December air, the members of an extensive family gathered at a cemetery lawn in Taguig.

This was a family united not by blood but by an inherited legacy.

The Philippine Daily Inquirer held on Monday a necrological service for its beloved editor in chief Letty Jimenez-Magsanoc at Heritage Park where a wake had started for her on Sunday.

The tribute, beginning with a Mass concelebrated by Inquirer correspondent Fr. Romulo Ponte and a Magsanoc family friend, Fr. Rory Caones, allowed Magsanoc’s grieving colleagues and employees to pour out their unending gratitude to her, share fond memories of her, see her off in songs, and accept the lessons she had imparted.

Magsanoc’s daughter, broadcast journalist Kara Magsanoc-Alikpala, delivered the response for the family, breaking its grieving silence since Magsanoc passed away on Christmas Eve.

“I know she has a knack for creating families wherever she went. There were no borders,” Alikpala said.

Inquirer president and chief executive officer Sandy Prieto-Romualdez, in her eulogy, thanked Magsanoc’s loved ones for “lending LJM to us, and allowing Inquirer to be her second family.”

“We were just so happy to be second. Because we didn’t feel like we were the second family. Her life was always dedicated so passionately to the story, and to the downtrodden. Your sacrifice had made such an enormous impact on society and community,” she said.

“And we cherished every moment,” Romualdez said.

Romualdez recalled days she would go up to the third-floor Inquirer newsroom to catch Magsanoc still working at 3 a.m., such as when she waited for the announcement of a new Pope to be able to carry the story on the paper that day. Usually, Romualdez said, she would see Magsanoc poring over documents, polishing a story to its most potent effect.

“If there was something that ticked Letty off, it was people who abused their position of power. Inis na inis talaga siya ’pag may naaapi. (It really made her mad to see someone being oppressed or abused.) This fueled her passion to work tirelessly for them, even if it meant being sued,” she said.

And this passion is the biggest legacy Magsanoc leaves behind, for writers and readers alike. “She wanted stories that would inform and engage readers. ‘Here is the news. Now this is what it means for you, for your family, for your community, for your nation,’” said Inquirer Learning section editor Chelo Banal-Formoso, who has worked with Magsanoc for 24 years, including during the martial law era at the Panorama magazine.

Formoso, in her eulogy, remembered the time when she and Magsanoc pursued a Panorama story on political prisoners in Bicutan, putting back paragraphs deleted by the military censors— “And damn the torpedoes.” The story gave Panorama its first Catholic Mass Media Award.

Eventually, Magsanoc would be fired from Panorama for offending the dictator Ferdinand Marcos, but Formoso credits Magsanoc for her “DNA as journalist.” And the Inquirer’s.

“This is why people either adore us or abhor us. We are too stressful to read. We make people uncomfortable. We make people want to do noble things. Like ousting a plunderer, or rallying to scrap the pork barrel,” Formoso said.

“I couldn’t resist imagining how many Mongol pencils we’ve snapped, how many trash cans we’ve kicked across the Inquirer newsroom—in our minds,” page one operations chief Nilo Paurom said in his eulogy, eliciting laughter from the crowd.

“Sometimes, working with Letty can be really trying and exasperating, but she does it to draw out the best in us, to give the Inquirer readers the best designed newspaper, and the most interesting reads of the day,” he said.

Paurom recalled Magsanoc’s “revolutionary” ideas, like running a photo spanning the entire front page, as was done for the Pacquiao-Mayweather bout.

Though Inquirer was “a team,” Paurom said, “at the end of the day, everybody knows it was Letty at the helm. Parang bahay ni kuya ang newsroom ni Ate (Like ‘Pinoy Big Brother,’ with older sister at the helm).”

But Magsanoc wasn’t one to have her nose up in the air. She knew when a little levity would help.

“The first time we had an elevator in the Inquirer after 15 years, we actually went up and down holding hands,” Romualdez recalled.

“We were like kids!” said Romualdez, laughing at the memory.

“This is a Time magazine hero, and she’d come up with a cute thing like that,” she said.

Magsanoc was also known for her sassy remarks. In a tribute modifying the lyrics to Billy Joel’s “She is Always a Woman to Me” with anecdotes of Magsanoc, reporter Tarra Quismundo sang: “She asked the tough questions, don’t care if you’re Dick Gordon. She told Rody Duterte ‘We sent no invitation.’ She told [Luis] Jalandoni ‘You’re so passé.’ She’s only after the truth, yes, that was Ma’am Letty to me.”

As observed by reporter Nikko Dizon, everyone working for the broadsheet seemed to have a “special LJM moment,” showing Magsanoc’s faith in her people, and the almost automatic familiarity it engendered.

Magsanoc made a point to know employees’ names, to be present even in their personal special moments like weddings or baptisms. “She doesn’t say no when she’s invited to be ninang,” said reporter Nancy Carvajal.

Carvajal, who was Magsanoc’s secretary for 14 years before getting her big break as a reporter, noted: “All reporters talk about how she nurtured them, but being her secretary, I saw how she also nurtured other employees of the Inquirer.”

“Even in her Christmas gifts, almost everyone receives a personalized dedication. She knew what to give the right person,” Carvajal said.

Magsanoc considered Carvajal her “personal trophy” for her award-winning stories on the pork barrel scam, which were done with Magsanoc’s constant encouragement and supervision.

The series bears Magsanoc’s imprimatur so much that on Monday, a National Bureau of Investigation team carried the urn containing her ashes from the Aeternum chapel at the Heritage Park, to the altar in the green field where the Inquirer tribute was being held. This was the team that worked on the investigation of the pork barrel scam.

Romualdez underscored Magsanoc’s first priority: her family. “Don’t you worry,” Romualdez told the Magsanocs. “We knew we were being placed second, not the first. Because she always had you wherever she was. Whether it was a phone call during a late meeting, or making sure she’d lined up for concert tickets for that grandchild. Her love for you was always evident.”

Carvajal added during her tribute: “During crunch time, there were only two kinds of callers [Magsanoc] would accept. The reporter whose story she’s reviewing. And her family.”

Inquirer’s tributes have hailed Magsanoc as a “rock star not only of journalism, but an icon of democracy.”

“It’s really attention she would hate,” said a grinning Alikpala in her response.

“But I think it’s the attention she so deserves, not because we want us to thank her, but because she wants us to shine the light. She wants us to know where this is coming from. And this is coming from her first love, Jesus Christ the Lord. This is what it’s all about for her: family and faith. When she tells you it’s not about the writer, it’s about the story, this is what she means. It’s about the Creator. And we are all, like she is, simply an instrument of love and service,” she said.

Inquirer Lifestyle editor Thelma Sioson San Juan said as much: “LJM has planted seeds in us. Of values, integrity, hard work, standards of excellence, passion for a story. But most of all, we draw strength from her spirituality and faith. And we hope to have this faith in each one of us. So that will be the Inquirer you will see from now on. It will carry the faith of Letty Magsanoc, stronger than ever. There will be a hundred LJM clones that the world will have to contend with from now on.”

Indeed, the “families” Magsanoc created are deep and extensive, and consequently, so is the reach of her legacy. Inquirer managing editor Joey Nolasco ended his eulogy with that hope: “To those to whom she is passing the Edsa torch, take heart. We now have someone to pray to for guidance in our challenging journey ahead.”

“We hope you all find solace in the thought that the Edsa flame that Letty and countless freedom-loving Filipinos lit 30 years ago shall burn ever brighter in the Inquirer,” Nolasco said.

A night for remembering LJM