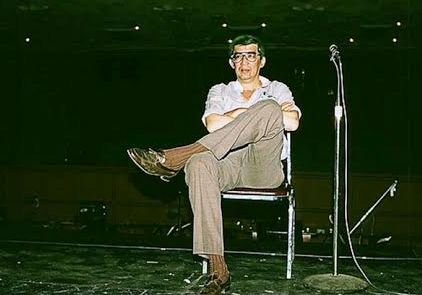 Teodoro “Teddy” Hilado, 77. He was the technical director of the Cultural Center of the Philippines from 1969 to 1973, and theater director of the Folk Arts Theater from 1973 to 1986. PHOTO FROM MONINO DUQUE

A lighting designer can spotlight an actor as much as any costume, movement or musical moment can. A lighting designer is like a magician, making walls and props disappear, the set handlers invisible, the mood and color of the production transformed instantly. When he does his work well, the lighting blends seamlessly into the set, the costumes and the storytelling.

Hilado, “Teddy” to colleagues and loved ones, was the technical director of the Cultural Center of the Philippines (CCP) from 1969 to 1973, and theater director of the Folk Arts Theater from 1973 to 1986. He succumbed to brain cancer at the age of 77.

“Teddy’s signature was his elegance,” says fellow lighting designer Monino Duque, a protégé of Hilado. “It was grand in a very quiet way. It never sought attention to itself, which is the way lighting should be. For me, it was always perfect. Where the lights were coming from, his use of color as an indication of emotion—they were always right. I’ve never seen anything like it from anyone else. And Teddy’s lighting was comparable to international works. I’ve seen a lot of Broadway shows, and Teddy’s work was at par in terms of lighting.”

Today’s theatergoers may have missed Hilado’s works for theater, but they can still see his lighting design for certain architecture, such as the tombs of Jaime Cardinal Sin at the Manila Cathedral and of deposed dictator Ferdinand Marcos in Batac City. He was also responsible for lighting Tower One & Exchange Plaza on Ayala Avenue, Makati City, as well as various churches in Bataan, Dagupan, Nueva Ecija and other places.

Those who did witness Hilado’s works have not forgotten them.

“He did a beautiful design for a ballet that was specially choreographed for the CCP Dance Company called ‘Songs of the Wayfarer,’ and his set was just a series of drops done by National Artist Salvador Bernal, made of bamboo chains,” recalls Duque.

“That gave you a feeling that you were inside a forest. And then there was this huge tube which served as a trunk for the forest. It was a huge tube of chains that dropped, and you could go in and out of that tube and the visual for that was just so magical.

“And then he had another one for the opera ‘La Traviata,’ where the lead character was alone on stage, and there was this beautiful shaft of light from one window peeking at her, and you could see her silhouette; the image was extremely
elegant.”

Duque is proud of how he became Hilado’s deputy and assistant: “When I first met him, he was already an icon of Philippine lighting. In 1969, there was a visiting professor from Northwestern University who was doing a course on stage lighting; I was one of the students, and Teddy was one of the guest lecturers.

“There were only five of us students, and Teddy was extremely generous in sharing what he knew,” adds Duque. “He would spend hours just talking with us about lighting.”

Duque recalls that, as mentor and pioneer, Hilado drilled in him and his colleagues some enduring lessons, among them:

“Don’t believe the reviewers. Only you will know whether you did a good job or not. Take what people tell you with a grain of salt; say thank you, but after that, you go home, use that to trigger your mind and check if you did a good job. Did you succeed in what you wanted to do?

“Never think of what you feel. Always remember that your emotions should help you tell the story visually, so you put your feelings aside. You have to be very critical and analytical. Then, later on, the feelings will come out.”