The year the ‘terno’ came back into favor | Lifestyle.INQ ❮ ❯ 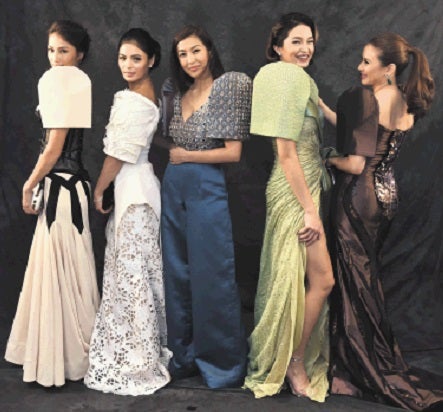 The year the ‘terno’ came back into favor

The Marcoses fled the country two years before Ivan Ruiz was born.

By the time Abdul Dianalan, Hannah Adrias and Yvonne Tabanao were born in 1995, Imelda Marcos had slunk her way back into the country and onto the political scene, once more  in her  ternos like it was 1974, although this time much toned down.

The four millennial fashion designers-in-the-making are part of the generation that Mark Lewis Higgins, co-author of “Fashionable Filipinas: An Evolution of the Philippine National Dress, 1860-1960,” says “has no idea what the terno is,” given the gap in history where, post-Marcos era, there seemed to have been an unwritten boycott on the national dress that had been long associated with the dictator’s flamboyant first lady.

In November, Ruiz, 27, and Dianalan, Adrias and Tabanao, all 20, students at Slim’s Fashion and Arts School, cut their teeth on the formidable task of designing ternos for celebrity endorsers of Bench, publisher of “Fashionable Filipinas,” to be worn at the terno ball and launch of the photographic resource book.

Designing and making a terno is a prerequisite for graduation at Slim’s, where Higgins, son of postwar designer Salvacion Lim Higgins, is codirector.

Higgins and co-author Gino Gonzales collaborated with Bench founder Ben Chan, who agreed that dressing its rosters of young celebrity endorsers could once more put the terno in the national consciousness, particularly among the youth.

At about the same time, in South Korea, a similar phenomenon had been in the news, pertaining to their national dress.

In October Vogue.com reported the sudden revival of the hanbok, Korea’s traditional dress, on the streets of Seoul.

The article was accompanied by a slideshow of young women in colorful, distinctly billowy gowns, sneakers or some other modern footwear peeking out from under the hems.

It had become such a trend that, according to the report, young people held “hanbok parties,” and that one designer sold about 1,000 of the gowns a month to girls in their teens to their 20s.

The interesting part was that these girls hadn’t been wearing the hanbok to formal events, but as part of their everyday wear, out on the streets. They bought fabrics from a popular market and had them customized.

A girl of 16 said she wore hanbok three times a week.

It’s probably wishful thinking to expect Filipino youngsters to be seen hanging in the malls in butterfly sleeves anytime soon. But it sure is remarkable how the terno—long relegated to costume, just like the hanbok—had reemerged in a big way in the national psyche last year, owing to the events surrounding the Asia-Pacific Economic Conference and, of course, the Bench terno ball.

The four Slim’s students were among several handpicked to submit designs to Bench, after which they were paired with celebrities. A few others were tapped to design barong Tagalog for male celebrities.

Working without a budget, Higgins provided Dianalan with a vintage mint-green fabric of his mother’s for Sarah Lahbati’s draped terno that played on the young beauty’s enviable shape. Like his classmates, it was Dianalan’s first time to make a terno, rendering the dress with big, bold butterfly sleeves, just as he was taught, the better to frame the actress’ delicate décolletage.

In their book, Higgins and Gonzales underscore how the imposing sleeves of the terno signified the period of emancipation of the Filipina.

It was the “power suit” in 1908, when women earned the right to a college education. Collapsing the terno sleeves is a pet peeve for the authors—and, for them, a dead giveaway that the culprit designer doesn’t know his/her terno history.

Adrias had a more radical take on the traditional dress: she created for Liz Uy a two-piece ensemble—wide-legged pants and a hand-beaded cropped top. The celebrity stylist was quite pleased, saying the distinctly modern terno was “very her,” according to the young designer.

Adrias’ strength is in tailoring, and she was quite keen on making pants for the project, a bold move that Higgins encouraged. “I’m not into embellishment, but my mom said it might be a good time to try something different, so I hand-beaded the top.”

The young designer also expressed delight at having worn her first terno at the ball, made by one of the Slim’s instructors. “I felt very elegant. Nakakahinhin pala—it makes you feel prim and proper.”

Adrias’ Liz Uy terno is now on display at Slim’s, with the ternos made by her classmates for the ball.

There’s Tabanao’s design for Karylle, with a beaded bodice inspired by Salvador Dalí’s “The Persistence of Memory.” The young designer had studied fine arts, and all her proposed designs were inspired by famous paintings.

“It’s a big switch from brush to needles, because now whatever I do is worn by someone. It won’t just hang on a wall,” she said. “Somehow it’s more difficult because it has to be functional.”

“I used to wear my Lola Thelma’s pink terno in school, so that I was typecast as a Maria Clara in high school,” Karylle said. “I love being in a terno, especially when I’m on Independence Day events abroad. I just wish we had more events in Manila where we could wear it.”

Karylle had told her that she might change after the red carpet. “At dinner, she was still wearing the dress, so she must have been comfortable in it. I was happy to see that.”

“I love how it was made by Yvonne,” said the singer-actress. “So much thought, work and love went into the creation of this terno. I wore it proudly.”

Ruiz, who works in finance and had just graduated from Slim’s, had the enviable task of dressing the svelte singer-actress Solenn Heussaff, for whom he designed a terno in a muted shade of neo-crepe, with contrast-color geometric cut-out accents on the bodice.

Heussaff, herself a one-time designer, called Ruiz to ask permission if she could add her own spin on the dress: she wanted to wear a corset over it. “I appreciated her courtesy,” said Ruiz, and was pleased that the actress’ styling complemented his vision for the dress.

Another student, Alley Magtibay, 24, was tasked to design a terno for actress Isabelle Daza.

Magtibay designed a flattering dress of vari-patterned black sheer fabrics and laces layered over a skin tone base. It had a trumpet tail and a low back and neckline, as the actress requested, and would have been a standout on any red carpet.

To the young designer’s dismay, Daza decided to wear something else at the last minute. The terno ball was the first time the students were making a dress for an actual client, and celebrities at that, such that the exercise was a lesson on so many levels.

For the ball, the students spent many sleepless nights, often camping out at Slim’s to work on their ternos,  to create “the best possible versions of their own designs,” said Higgins.

Higgins said the students were given a free hand to experiment—“but not on the sleeves, because we don’t want to be responsible,” he said. “You can’t deconstruct if you don’t know how to construct a proper terno sleeve.”

It’s his stance that one can modernize the terno, have it paired with jeans or even shorts, “just lay off the sleeves because it’s a serious mistake to make the sleeves small!”

As for his millennial wards, they agree that the terno may not make for street-style wear even in their post-Imelda, post-Cory generation. But as Adrias’ pants terno has proven, the national dress has other, just as exciting possibilities.