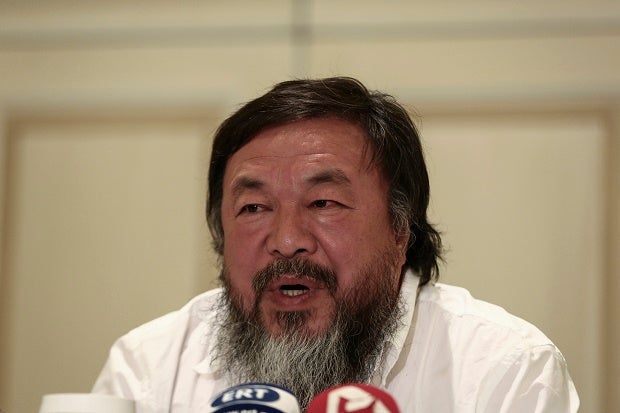 Chinese activist and artist Ai Weiwei addresses journalists during a news conference in Athens, Friday, Jan. 1, 2016. The Chinese artist visited the island of Lesbos is solidarity with refugees and migrants who continue to arrive on a daily basis hoping to make their way into Europe. AP Photo

ATHENS, Greece—Chinese dissident artist Ai Weiwei on Friday announced plans to create a memorial on the Greek island of Lesbos to the plight of refugees, many of whom have lost their lives trying to reach Europe.

“A lot of people have lost their lives under the waves… we need a memorial,” Ai told AFP after a news conference on the project.

“I already set up a studio in Lesbos. Next year we are going to be involved with different projects,” said Ai, adding that his workshops in China and Germany as well as a number of his students would be involved.

“This is a very historical moment from any perspective. As an artist I want to be more involved, I want to (create) artworks in relation to the crisis and also create some kind of consciousness about the situation,” he said.

The artist earlier this week paid a holiday visit to refugees and migrants flocking to the Greek island of Lesbos, tweeting out photos and videos that bore witness to their plight.

He posted a video on Monday showing the arrival of a rubber dinghy carrying desperate people to the island’s shores from nearby Turkey.

“It’s very important to come and be part of it,” Ai said Friday.

The 58-year-old also retweeted photos, including one of him posing with Norwegian humanitarian workers from the group Drop in the Ocean.

Another shows him on a beach holding a child’s life vest, an object that has come to symbolize the human cost of the migrant flight, with over 700 people having drowned in the Aegean Sea between Turkey and Greece this year.

The outspoken critic of the Chinese regime has made ample use of his passport since he got it back in July, four years after it was confiscated.

During a visit to London in September, the artist said he was “very proud” of the “civilized” welcome that Germany—where his son lives—has accorded to refugees.

More than one million migrants and refugees reached Europe this year, mainly fleeing violence in Afghanistan, Iraq and Syria, of whom four in five traveled via the Greek islands.