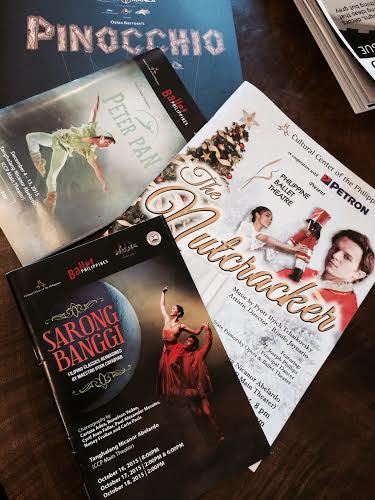 2015: Year of dance in cockeyed perspective

AND SO the dance year ended with a wave of a wand, a sprinkle of pixie dust, and crowd-pleasing feel-good fare dished out by the three main ballet companies in the city: Ballet Manila, Ballet Philippines and Philippine Ballet Theater (PBT).

Bristling with noteworthy productions this year, Philippine Ballet Theater, once considered the upstart among these three ballet groups, provided the gladdest note by giving the two other companies a healthy reason to literally stay on their toes. Former principal dancer and teacher Gener Karing attributes this to the newfound maturity and seriousness of the company members.

Confident technique was evident in lead dancers Lobreza Pimentel and Regina Magbitang, alternating as Clara and the Sugarplum Fairy, and Joanna Galeste in her sensuous take on the Arabian divertissement, partnered with Crimson Guirjem.

Kazier Policarpio likewise was a stand out in the “Dance of the Reed Flutes.” Pimentel who, earlier in the year, was energetically impressive in “Don Quixote,” displayed a similar verve as the Sugarplum Fairy, which leads one to imagine that perhaps a delineation in characterization is called for to distinguish a Hispanic firebrand from a more delicate ephemeral creature. Nevertheless, Pimentel shows great promise.

Ensemble dancing has always been the strongest point of Ballet Manila, which can be attributed to the meticulous training that artistic director Lisa Macuja and codirector Osias Barroso extend to company members.

With an array of toy soldiers, dolls, puppets and fairies, harlequins and circus acts, the spirit of excitement at the Yuletide season is capped by an explosion of confetti and stardust in its grand finale, much to the delight of the crowd, a fitting prelude to visiting the carnival next door.

Ballet Manila has always been about bringing the fine artistry of ballet to the masses, and this, the company does gratefully and successfully.

Ballet Philippines’ sixth production of “Peter Pan” still resonated with magic, especially when that flying machine did its job. In its first staging, I do recall a certain hesitance in the flying technique that left me and some audience members wanting for more aerial acrobatics. After all, we weren’t after dance technique then, but magic.

But this time around, perhaps due to the familiarity with Edna Vida-Froilan’s piece and Froilan herself being comfortable with her work, a maturity and ease was prevalent not just in the flying, but also in the dancing.

While I don’t doubt the facility of Cyril Fallar’s depiction of Pan, it was Jean Marc Cordero’s performance I caught. His stage acting background, matched by his proficiency of ballet technique contributed largely to his convincing characterization of the boy who didn’t want to grow up.

In all the staging of “Peter Pan” through the years, Cordero’s Pan was perhaps the lightest, most enjoyable I had witnessed, despite the fact that his recorded voice was Mary Martin’s. While a Broadway soundtrack of a musical play can prove detrimental to an art form that denies the spoken word, the proportions of acting and dancing could make or break the storytelling in dance form. In this, Froilan’s sensitivity to the art form taking precedence over the recorded spoken word made for the material’s successful transformation into a dance piece.

In the same token, earlier in the year, two productions could have reconsidered the balance between dance and music. PBT’s “Dancing with One Voice” and Ballet Philippines’ “Sarong Banggi” suffered from an erroneous balance of these two elements crucial to dance performance.

In “One Voice,” the choreographic style, rife with acrobatic lifts and complex partnering and contrapuntal dance phrases, was much too hectic for mellow hit ballads like “The Prayer.” While it showcased the choreographer’s adept mastery of his style and the dancer’s technical skills, the choreography proved to be top heavy for the rather simple and sentimental songs in the repertoire.

Conversely, in “Sarong Banggi,” the lushness of Ryan Cayabyab’s scores like “Salidumay,” “Dalagang Pilipina,” and “Sarong Banggi” was not in sync with the minimalist moderne style of choreography that six choreographers adapted, in an attempt, perhaps, to achieve singularity of choreographic style, while trying to tell a story strung together by several full-bodied scores replete with musical nuances characteristic of Cayabyab’s arrangements: syncopations, counterpoints, complex chord progressions and transitions, most of which were lost in the movement.

Although Cayabyab’s music usually lends itself to a more balletic dance style, contemporary choreographers like Mats Ek, for example, have succeeded in creating a choreographic style for existing classical scores where expression and musicality are the highlighted elements, which could very well be complementary to a Cayabyab score.

In the case of “Sarong Banggi,” the angularity of movement alongside a multi-nuanced Cayabyab score was like insisting on a Rococo chair in a Zen temple. Or, perhaps a case of too many choreographers spoiling the broth?

Dance and music are inherent in Filipino talent and one hardly exists without the other. This year’s developments in dance, whether hits or misses, can only be viewed in a positive light.

Exposure, energy, and willingness are obvious in the three ballet companies. So much the better for the spectator to heed the call for support of this art form.