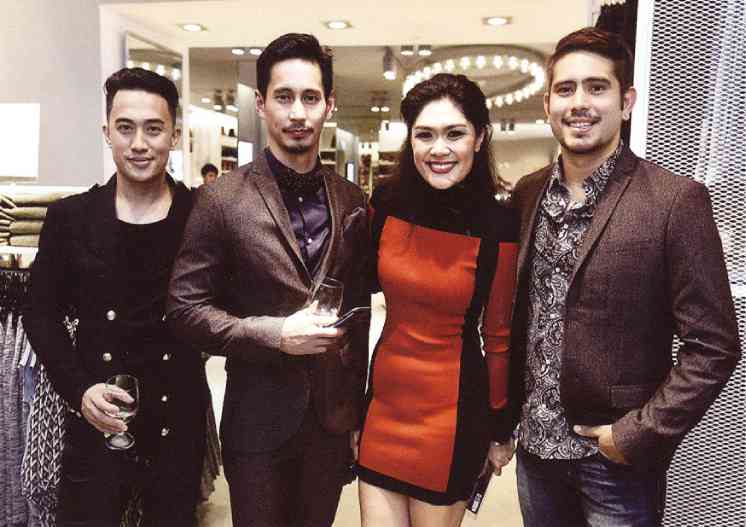 H&M held a Cebu VIP Night to mark the inaugural of its store in Ayala Center. It covers three floors with a total area of 3,800 square meters. It’s the biggest H&M store in the country, says Cybill Gayatin Guynn and we take her word for it.

About 1,000 attended the celebration, with guests of all ages, welcomed by Fredrik Famm, H&M’s country manager for Southeast Asia; Dan Mejia, head of communications for the Philippines; and Nikki Verzo, showroom manager.

The shopping was frenetic as the store offered a one-day only 20-percent discount on purchases. Hope Solano got herself a very elegant outfit.

A great treat was music from DJ Divine and DJ Tom Taus plus collaborations from Techy Romantics and Mars Miranda. Highlight of the evening was a team-up between Pupil iconic frontman Ely Buendia and his sister Lally Buendia (Domino) for the very first time.

A week later also at Ayala Center Cebu was the grand opening of the new and expanded store of Marks & Spencer, likewise attended by a large crowd in a buying mood. You may read that as splurging.

The occasion brought down to Cebu from Manila the affable Anton Tantoco Huang, president of Stores Specialists Inc., as well as Steven Sarmenta, executive vice president and general manager of Rustan’s Marketing Specialists.

An attentive throng of fashionistas sat on Tiffany chairs and applauded a fashion parade of the Marks & Spencer Winter collection, with pretty models and dashing men on an L-shaped catwalk.

A Christmas party with an exchange of gifts can have hilarious results, as when a gentleman gets a three-strand necklace, and quips this is the third year he gets a ladies’ fashion accessory.

So it was, and a lot of fun, when Amigos de España gathered for a Feliz Navidad luncheon at Salon Barcelona of the Casino Español.

President Amparito Llamas Lhuillier gathered the board at her table: vice president Susan Sala, secretary Myra Gonzalez, and treasurer Julina Muertegui who was in charge of registering the gifts, aided by Mitor Montilla, here to spend Christmas. “It is very cold in Cuenca (Spain) during this time,” Mitos declared.

Grateful acknowledgement was made to Milagring Sembrano who lives across the Casino Español, for though she did not come, she sent a box of Davao pomelos and bags full of her special large peanuts roasted in butter. (Julie Gandionco wanted to know if Milagring sells them as she’d make an order.)

Pilar Cusi was among the first to arrive, as was Carmen Rodriguez de Martinez who also lives in a mansion across the Casino. She was later joined by daughter-in-law Chichi Martinez, and granddaughter Menchit Martinez.

Margot Larrañaga came with a special guest from Spain, Pedro Maria Barinaga, who used to be with the Jai Alai fronton in Cebu way back. He gravitated toward Marichu Garcia, as they come from the same hometown in the Basque country.

The Shangri-La’s Mactan Resort and Spa has a new general manager in Rene Egle who is from Germany, is very personable, and exudes dynamism. We had the opportunity to meet him over dinner at the resort’s Cowrie Cove restaurant by the sea.

Doing the introductions were the resort’s director for sales and marketing Albert Lafuente; and communications director Cassandra Cuevas. It is nice to see her back in Cebu after two years in Shangri-La Doha.

First on the list was sauteed king prawns, followed by pan-seared scallops in truffle-scented polenta. Entree was a slab of the juiciest tenderloin with rock lobster on the side. In other words, surf and turf, but this one also had a generous portion of foie gras.

Dessert was a concoction of roasted apple and raisins smothered with vanilla ice cream. Pelosi must be a very highly qualified dietician.