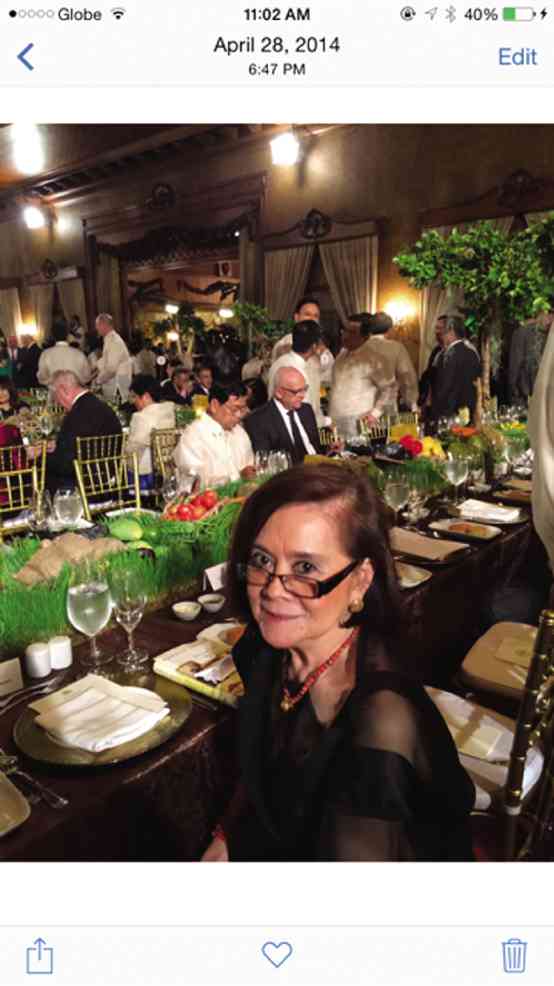 The most prosperous New Year to you—and prosperity does not only mean abundance of material possessions but also an experience. If you are healthy, happy in your relationships and successful in your profession or vocation, you are prosperous.

Last Christmas Eve was unforgettable; while sending out my Christmas greetings to friends and loved ones, I got a text from a friend telling me that Letty Jimenez-Magsanoc had passed away. I did not believe it.

I tried calling Pocholo Concepcion to verify but he was not answering, and so was our Lifestyle editor Thelma Sioson San Juan.

Pocholo finally called back. He said, in between sobs, “Wala na si Letty.” And as we were both sobbing, all I could say was, “Bakit?” We could not continue talking on the phone because we were both choking.

The news was so difficult to accept but my consolation is that I believe one’s death is a soul choice. Besides, heroes never die. Letty was a living hero, not only because of her Edsa stand but because of her sterling principles as a journalist.

Last year, I asked her to write a blurb for my book “You Are God As You,” and here is a text I received from her that I would like to share so you can get an insight into the kind of person she was:

“I have so admired you all this time mainly for the way you have lived the life after your own heart and consciousness! Though I respect your views and celebrate what works for you and TOPPP (Temple of Prayer, Peace and Prosperity), I cannot write a blurb for your book. It will come across as not sincere. It goes against what I believe in with my whole being. I have adopted some of your mantras particularly on waking up to a miracle each day. I suggest, please ask Boy Abunda to write the blurb. Also, his name has cachet celeb ring to it that I don’t have. I watched his show when you guested and I was so riveted by your conversation. Thank you for the honor which I have to decline if I have to be true to myself. Tell me how I can help you push your book. There is so much beauty in it.”

That text shows why Letty Jimenez-Magsanoc was considered the editor in chief of editors in chief.

One of the principles that I teach in IAMISM emphasizes that all roads lead to our greater good. This last journey of Letty surely proves that point, for it is certain that the “cosmic Birther of all radiance and vibration” or the Universal Father has opened the gates of heaven for Letty.

Thank you, Letty, for having honored us with your life, and for showing that there is no substitute for courage, integrity and authenticity. You are loved.

Last week, I wrote about the beautiful Filipino women who became international beauty queens. This week, I would like to feature two other Filipino beauties who may not have won beauty titles but have earned their place in the international social scene. They are Minnie Osmeña and Isabel Preysler.

Minnie Osmeña first married Joselito Jacinto with wedding invitations printed in England, and which misspelled Intramuros as Interamuros, where the Manila Cathedral is located.

The marriage did not last very long and when it was annulled, Father James Reuter of Ateneo de Manila was a witness and said, “The marriage was done under severe social pressure.”

Minnie moved on from her marriage with a steel mills scion into a life with wealth from copper and gold mines as Mrs. Jesus Cabarrus Jr.

And then she decided to have something more liquid—and what could be more liquid and healthy than Carnation milk, and thus, a third marriage to Dwight Stuart?

A few years before she married him, I ran into Minnie in New York City, and being the practical Capricorn that she is, she said, “I want to marry again if the right man comes along.”