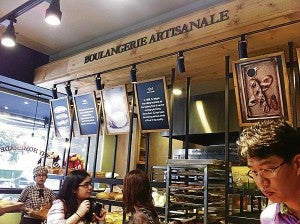 A tourist visiting Seoul for the first time will be struck by the unbearable cuteness of the city, and the ubiquity of cafes.  Forget run-of-the-mill coffee chains, Seoul is populated with quirky coffee shops, with menus handwritten in chalk on artful slabs of wood and pastries as pretty as the decor.

The Koreans seem to have a fascination with la vie Francaise, translated into its stationery, a district lined with trees and done in cobblestones to resemble Paris and the French-inspired boulangeries in each corner.

One of these French bakeries popular in Seoul is Tous Les Jours, an artisan bread and cake shop that transports you to Champs-Elysees, with its mint-green signage and the pastel-colored bicycle with wicker basket propped against the glass display.

This little slice of Korean-French heaven arrives in Manila this month, bringing with it not only its quaint decorative flair but also the mouth-watering desserts it is known for. 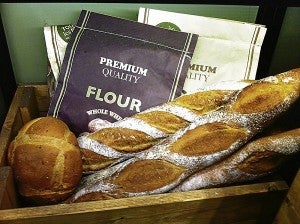 On top of the must-try list is Tous Les Jours’s fresh cream cake, a butter-free, airy chiffon cake coated in farm-fresh, imported cream.  The cream cake is made daily and is sold only on the day it was made.   A slice of fresh cream cake is lighter in calories compared to a slice of chocolate cake, but it will even out because you’ll find yourself hard pressed to stop at just a slice–you’ll want to eat the whole thing yourself.

The Kiss Kiss cake, a strawberry chiffon sprinkled with crunchy strawberry bits is another best-seller, where 4,000 of these are made every day in Korea. It was developed by Kim Dong Min, a well-decorated pastry chef.

They take their cakes seriously, too.  During a visit to one of their cafes in Gongdeok-dong, we learned that in the kitchen, there is a man whose only job is to make the icing, while another was sent to New York to learn the secrets to cheesecake making. 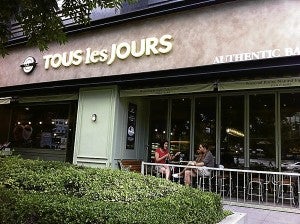 The secret to their signature, homemade style cakes is a simple recipe using nothing but fresh ingredients—from the milk to the fruit toppings and the flour, so expect some of your future favorites to be seasonal.

For those looking for holiday gifts, Tous Les Jours packages each cake party-ready—a kit with matches and candles is included with each purchase.