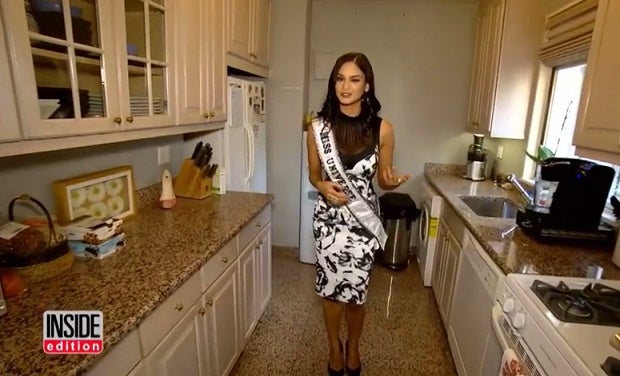 Juggling several interviews and press appearances during her first day on duty as Miss Universe, Pia Wurtzbach toured US news magazine show “Inside Edition” around her New York City apartment.

The luxury apartment, which has a view of the Big Apple’s Fifth Avenue, is among the various prizes that Wurtzbach bagged when she was crowned as the most beautiful woman in the universe.

During the tour, she showed the apartment’s living room and kitchen where she said that she doesn’t have the time to cook anymore.

“I don’t really have the time to cook although I’m a culinary graduate and I love to cook and I also love to eat,” she said.

The Filipina beauty queen also showed “Inside Edition” her royal blue Albert Andrada gown which she wore during the pageant.

In an interview, she praised host Steve Harvey for owning up to his mistake after wrongfully crowning Miss Colombia Ariadna Gutierrez.

“When he apologized, it was very nice of him. He didn’t have to, you know? I accepted his apology. I think what he did—he admitted the mistake, he apologized, he fixed it right away. And I thought that it speaks huge about his character,” Wurtzbach said.

When asked on what she thinks about Gutierrez’s statements that the announcement mix-up was a “great injustice” for her and that she should have been named as a co-winner, Wurtzbach said that she understands where the Colombian beauty was coming from.

“If I was in her position, I’d probably feel the same way,” the Miss Universe said. AJH/CDG