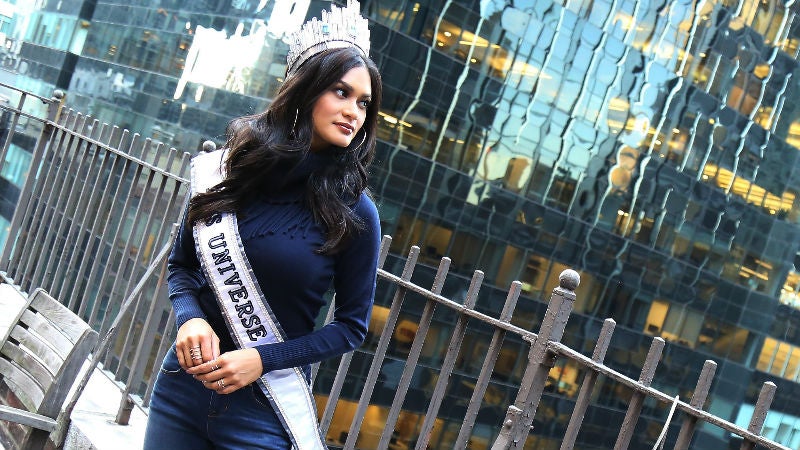 ON TOP OF THE WORLD Miss Universe Pia Alonzo Wurtzbach surveys the cityscape in New York City, her home during her yearlong reign. JORY RIVERA/CONTRIBUTOR

NEW YORK—Just thinking about her homecoming already excites her, 2015 Miss Universe Pia Alonzo Wurtzbach confessed, adding that she couldn’t wait to get home.

The first Filipino in 42 years to win the prestigious crown however remains as philosophical as she is euphoric about achieving her lifelong dream. Be firm with your goals but flexible with your methods, said the Fil-German beauty queen who won the Binibining Pilipinas-Universe title on her third try.

Despite her hectic schedule on her first “official” day as Miss Universe, Wurtzbach managed to squeeze in some time to sit down with the Inquirer for a quick catch-up after her controversial win at the Miss Universe Pageant in Las Vegas last month.

As the whole world knows by now, pageant host Steve Harvey mistakenly announced Miss Colombia as this year’s Miss Universe, before apologizing for his error and naming Miss Philippines as the real winner.

Here’s a question-and-answer with Wurtzbach on her memorable win:

How was your first night as Miss Universe and did you sleep at all?

“It was very busy because right after the pageant, there were a lot of interviews. There was a press conference [as well]. And then I was able to see my family and friends at the suite where I was staying. When I turned on my phone, I [saw] so many messages. I’ve never received so many messages in my life. A day [wouldn’t] be enough for me to reply to each and everyone. I just had to browse through every message. It was very busy that night but surreal. Yes, I was able to sleep. Soundly. Knowing that haaay, finally I got the ending that I wanted.”

Is being Miss Universe as sweet as you dreamed it to be?

“Yeah. And it’s a nice feeling to be THE Miss Universe. I mean, to get here. I know how hard it is to even be a representative of your country. The competition is tough back home. To make it this far and win Miss Universe is a big deal. It’s a big deal not just for the Philippines but even for me. It took me a long time to get here so I’m very proud of that.”

Do you have any idea what your yearlong reign would look like?

“Well, I see a lot of challenges. There’s going to be a lot of traveling as well. I hope I get to visit the Philippines a lot of times—and not just for the homecoming. Hopefully, also for the coronation of the next Binibining Pilipinas when I pass on the next Miss Universe-Philippines crown and with it, raise awareness about HIV in the Philippines. Also, for the

relief operations in the Philippines that I want to push through. A new cause that I want to [shine] some light [on] is cyberbullying. That’s something that I also want to work on this year.”

Well, you mentioned homecoming. How do you imagine your homecoming in the Philippines?

“Iniisip ko pa lang, na-excite na ako. (Just thinking about it already excites me). But you never really know until you’re there. Although I’ve been hearing great stories of how big a positive impact I made during the Miss Universe [pageant], I have yet to experience it myself, so I can’t wait to go home.”

Do you miss home? Your family? Your friends?

“Oo, (yes) I do. Especially when I [realize] this is probably the longest [I’ve been] away from home in a long time. I’m usually in England just for a month. But it’s already been a month since I’ve gone. Yeah, I miss going back home. I miss being with my friends and seeing my Binibini sisters. I just miss everything. I left my condo and my car as if I had thoughts of never coming back. But now I think, oh my, I’ve left some bills unpaid. So I need to go home. I live on my own and have to settle some things since I’m staying away for a year. I have to go back since I miss [friends and family] and also because I have a lot of errands.”

“It’s very beautiful, being in the city. You get a feel of it in certain parts of Manila [and] certain parts of England. But in here, everywhere is like this. It’s wonderful. Especially the shopping. That’s what makes it so risky for me—I live so near the shopping district. So, oh my gosh, I have to have a lot of self-restraint. But it’s been fun.”

Do people recognize you even without the crown and sash?

“Yeah actually. One time I was wearing this jacket and shades as well, and from half a block away, somebody goes ‘Pia! Pia! Pia, ha?’ My manager said that had never happened to me before, that from half a block away somebody would recognize a Miss Universe, what with how I look right now. Because half of my face was covered. Yes, I get recognized, I don’t know why. Is it the shape of my face? My walk? Or because I was talking so loudly? I don’t know. I don’t talk in Tagalog with my manager. But yeah, people recognize me. I’ve landed on [the TV show biz show] TMZ. I’ve been spotted by paparazzis, even without me wearing make-up. I was thinking: How can they recognize me, when I don’t recognize myself?”

How about other nationalities, aside from Filipinos, [how do they react to you]?

“A lot of them ask to have their pictures taken with me, especially those from the Dominican Republic. They’re very nice, very warm. I’ve also met people from Colombia and they were nice.”

How was your official day as Miss Universe?

“I had a very hectic schedule but [it was] well organized. [The organizers] are very good with time management so we were able to do all the interviews on time. We did not have to rush [even if the day was] very packed. I started at 4 a.m. today and I still have one at around 9 or 10 p.m. live. So it’s a busy day. What I learned on my first day was that they weren’t kidding when they said they were looking for a spokesperson. Because they didn’t train me to answer like this. They didn’t give me ‘here, this is what you have to say.” You have to think of answers on the spot to whatever [question] is thrown at you. It’s not enough that you are a pretty face; they really want somebody who can talk because they don’t feed me with the answer. They ask me: What do you think? Even small things like captions for

Instagram photos, they want me to compose them. So I’m actually doing the writing myself. And I’m thinking, they really want somebody who can speak, who can think on their feet as well.

Do you still keep in touch with the other girls from the Miss Universe pageant?

“Yeah and I miss them. I wish I get to visit some of them when I go to their countries. I especially miss my Asian sisters because I was very close to Miss Malaysia, Miss Myanmar and Miss China since we were all under one supervisor. So four girls, one supervisor. We kind of have to stick to each other lest we get lost. There were 80 contestants, but I became very close to the three girls and I really miss them because they were really my comic relief during the pageant. Of course there was also a lot of pressure from the Filipino fans for me to win. I also put a lot of pressure on myself. But I really like talking to them so I miss them a lot.

You were once a fan. How do you feel that famous people tweet or mention you on Instagram? Siwon? Tyra Banks for your smize?

“I admire them both (Siwon and Tyra Banks). I was a big fan of Super Junior when I was younger. I think I still am.

[Siwon] is very cute, especially now. About my ‘smize,’ I learned a lot from Tyra Banks in [America’s Next Top Model]. I picked a lot of tips from her.

And earlier today, I met Samuel L. Jackson who said he hopes to get to work with me in the future. He’s so warm.

I also met Eva Longoria during my interview in Access Hollywood, and she congratulated me. When we were about to start, she even accompanied me to the interviewer.”

What lesson can people learn from your journey to the Miss Universe crown?

“A few lessons that I think they can learn is ‘never give up.’ It took me a long time to get here—and I stumbled along the way—but I was able to make it. Another thing: ‘choose your battles, focus on your aim.’ Don’t focus on whatever is thrown at you. You know what you want, so set your eyes on that. I’ve said this before: Be firm with your goals but be flexible with your methods. Just focus on your goal.”