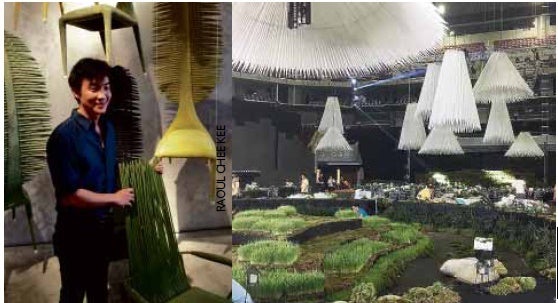 KENNETH Cobonpue (left); as creative director of the recent Apec welcome event, he transformed the MOA Arena into a reimagined Banaue Rice Terraces of northern Philippines.

As far as the home scene is concerned, 2015 will be remembered as the year world-renowned Filipino furniture and industrial designer Kenneth Cobonpue’s Yoda chair became a household word and a showcase of Philippine style, in the same league as the barong and terno.

Introduced in 2008, the Yoda chair gained a following among furniture collectors, interior designers and creative types, including local and foreign celebrities.

It broke into the mainstream last November when images of Asia-Pacific Economic Cooperation (Apec) leaders such as US President Barack Obama, President Aquino, Japanese Prime Minister Shinzo Abe and “Apec hotties” Prime Minister Justin Trudeau of Canada and President Enrique Peña Nieto of Mexico sitting on swivel versions of the chair were beamed on national television and to the rest of the world.

Made of uneven rattan poles entwined on a supple, stainless steel frame, the Yoda chair has a distinctive backrest that mimics a clump of wild grass, wrote Inquirer Lifestyle contributor Marge Enriquez.

Through the years, Cobonpue has reinterpreted the accent chair to produce a sofa, bar stool, side chair, table and swivel chair.

Six of the Apec Yoda chairs were auctioned off last month for the benefit of Unicef. In just two hours, the online auction generated P8.76 million. The highest bid (P2.05 million) was for the chair used by Trudeau. Obama’s chair was a close second at P2 million.

Cobonpue was also lauded for his work that transformed the SM Mall of Asia (MOA) Arena, the welcome event’s venue, into a showcase of Filipino design.

Veering from the beach and fiesta themes used in previous Apec events, Cobonpue designed a setup that reimagined the Banaue Rice Terraces of northern Philippines.

Less than a month later, Cobonpue made headlines again when he ran after counterfeiters. Armed with search warrants, agents of the National Bureau of Investigation swooped down on furniture stores in Market! Market! and in Tagaytay, wrote Inquirer Lifestyle’s Cathy Yamsuan and Anne Jambora in separate reports.

Insiders believe that Cobonpue’s move to prosecute those pirating his designs is a first in the country.

The past year was also a time for reconciliation. In an exclusive coverage last January by this reporter, part of the creative community that once wanted furniture and interior designer Budji Layug—the country’s exponent of Filipino Moderne—banned from practicing his profession has embraced him as one of their own.

Layug’s talk before members of the United Architects of the Philippines (UAP) Alabang Chapter at Acacia Hotel was unprecedented and historic.

Upon the invitation of its chapter president, architect Choie Funk, Layug agreed to share his journey as a creative person and his thoughts on Filipino Moderne in an ever-evolving and increasingly globalized world.