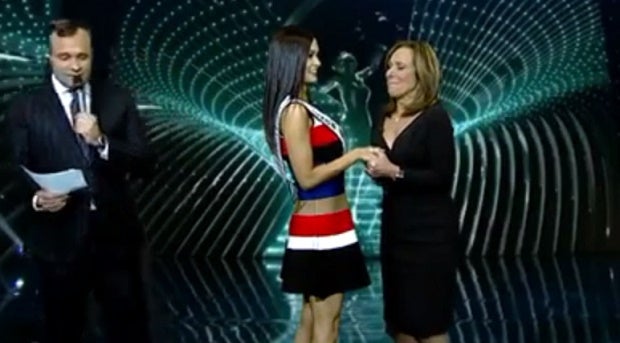 Miss Universe 2015 Pia Wurtzbach had to relive the controversial flub which shocked the world to compete for the role of being the leading lady for the next James Bond film.

In her television appearance in “Good Day New York,” Wurtzbach reenacted the announcement mix-up together with television hosts Rosanna Scotto and Greg Kelly.

Scotto first asked Wurtzbach: “I heard that you are interested in acting more?”

The reigning Miss Universe said: “Yes. I have been acting for a very long time in the Philippines and if I ever get the opportunity here, why not?”

Wurtzbach then said that she is a very big fan of James Bond.

To which Kelly said: “We have been actually in consultation with the producers of the next James Bond film and here’s the deal…”

The set then transformed into a mock Miss Universe stage and the Filipina beauty queen was very game in reenacting the faux pas with Scotto to vie for the role of the next Bond girl.

Before reenacting the announcement mix-up, Wurtzbach shared her thoughts on what happened during the coronation night and what could be the good and the bad sides of the controversy.

Wurtzbach said that the good side of the faux pas was that it had people talking about the pageant for weeks. On the other hand, she said that the bad side of it was hurting the feelings of Miss Colombia Ariadna Gutierrez.

“Ariadna was hurt. I greeted her during Christmas Day which also happened to be her birthday on WhatsApp,” she said.

The 26-year-old beauty queen is on a media blitz after she officially started her reign last January 4. AJH/CDG