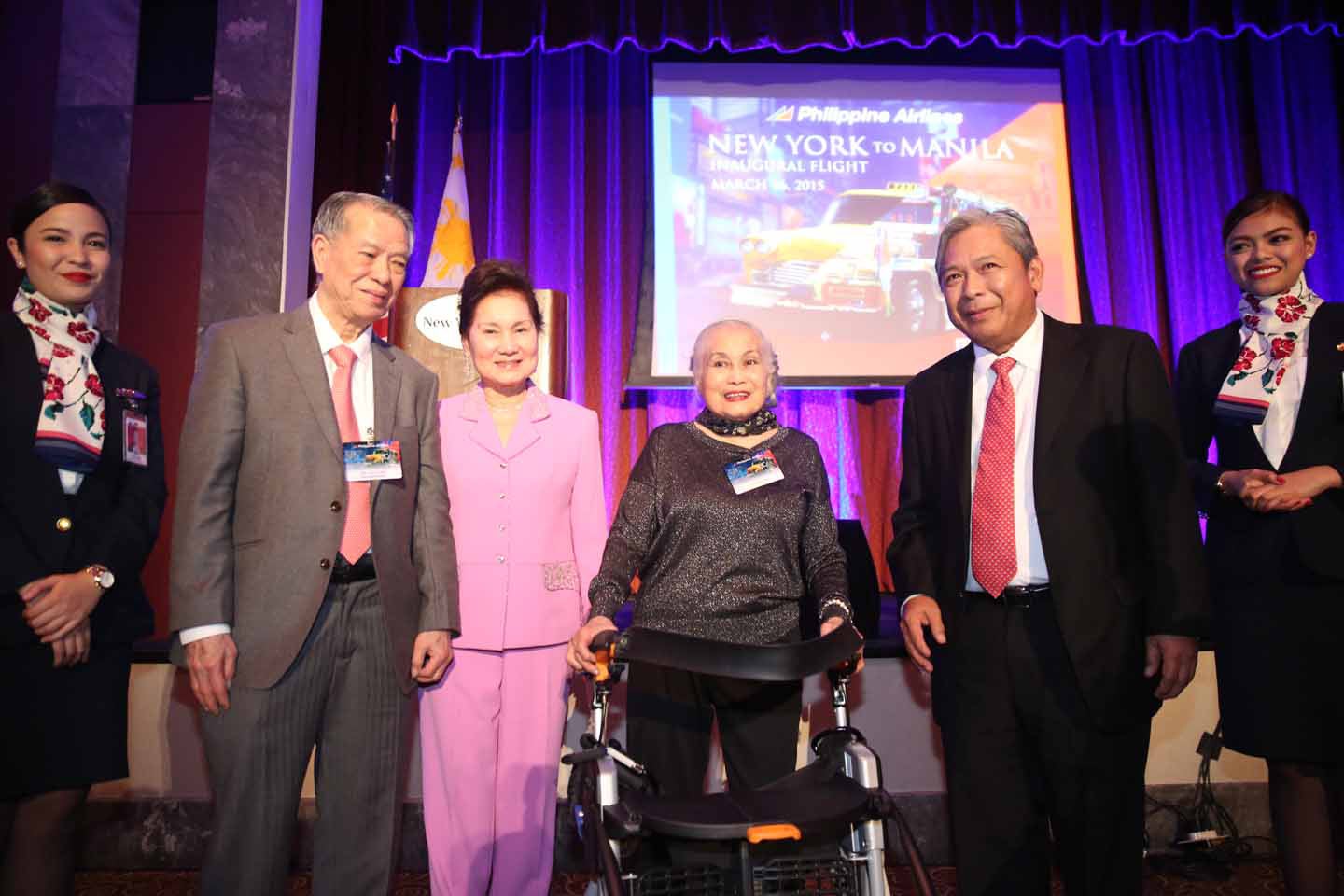 A PAL icon has flown home

Rebecca “Becky” Verzosa-Santos, one of Philippine Airlines’ (PAL) first flight attendants, who served on PAL’s first-ever trans-Pacific flight to fly home weary American soldiers after World War II, passed away last December 14 in New York due to complications from a heart attack. She was 92.

She is survived by her children Fr. Caesar, Gary, Rebecca and son-in-law Tim Murry, and granddaughter Alex.

She was a special guest at the star-studded dinner in Manhattan (her second home since 1987) where Becky received a standing ovation after Bautista cited her pioneering contributions to the flag carrier.

Tan, who was humbled by the presence of a PAL pioneer, gifted Becky with two round-trip business class tickets—New York-Manila-New York—so she could come home. Unfortunately, she didn’t have the time to use them.

Alex recounted that she would often accompany her “partner in crime” to different trips and reunions. But she often got sidelined once participants started pouring their attention on Becky.

Weeks after her heart attack in September, friends and former colleagues would check on her at her small Manhattan apartment.

Becky has etched an unparalleled record at PAL. She was one of PAL’s first domestic cabin attendants at the resumption of operations in February 1946. She was also assigned to train the first cabin crew of Japan Airlines when it was a start-up carrier. She wrote PAL’s first manual for flight attendants, which became the basis for today’s cabin crew training manuals. After training other cabin crew, she became the first head of PAL’s baggage handling unit.

She once said, “It’s a beautiful experience to help people find their lost baggage.”

But she is best known for as the first flight attendant who embarked on a 41-hour-long trans-Pacific flight that made stop overs in Wake Island, Guam, Johnston Atoll and Honolulu before landing in Oakland, California. PAL used a four-engine DC-4 that was chartered from Trans Ocean Airways.

On July 31, 1946, she looked after 40 homesick US soldiers, manually pumping air on mattresses for them to sleep on during the long flight. Becky said, “I slept on the bucket seats.”

She became a PAL stewardess at 22, passing the minimum height requirement of five feet. After her studies at the University of the Philippines, she briefly worked at the US Air Force before applying at PAL.

“I applied not so much because I would get to travel, but because I thought the work was exciting and fun and challenging,” she said.

Her son, Fr. Caesar, recounted how his parents met, “My mother was invited to a blind date by her best friend, also a flight attendant. Captain Miguel Santos, who flew with the US Air Force, was paired with Becky. That blind date eventually led to marriage.”

Lola Becky has left volumes of memories and a trail-blazing record—41 years to be exact—in local commercial aviation history.

In a New York coffee table book that featured her, she was quoted as saying, “Make use of all your faculties while you are going toward your golden years because you want to be of service. To give (of) yourself, to love—this is why we are on earth.”