The secret life of the newsroom | Inquirer Lifestyle ❮ ❯ 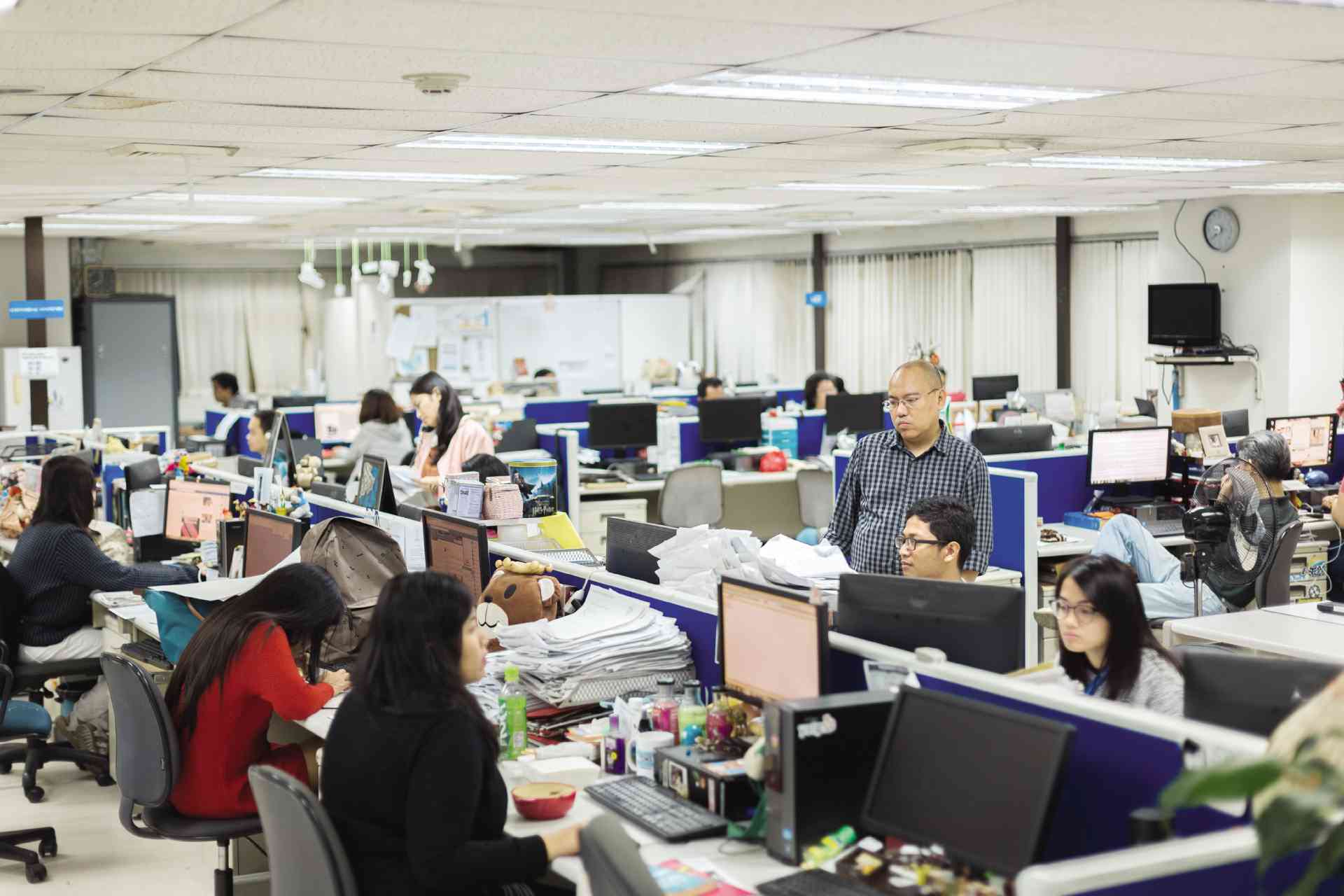 A PLACE where holidays are like unicorns Jilson Seckler Tiu

The secret life of the newsroom

THIS is the truth, the whole truth, and nothing but.

Have you ever wondered about the kind of people who make up a media organization like the Philippine Daily Inquirer?

We’re not just talking about hard-hitting journalists, award-winning photographers, brilliant editors, or media celebrities, but the ordinary folk behind the news, just being themselves.

Wouldn’t you want to know who’d be crazy enough to choose to work in a high-octane, high-pressure environment like the Inquirer? What kind of personalities do they have? What pushes their buttons? What are they like after the job is done?

On this paper’s 30th anniversary, here’s a peek into the individuals who compose Team Inquirer and the vibrant world they inhabit.

When you work in the Inquirer, you will never go hungry. Fast food, gourmet delicacies, home-cooked meals, chips and snacks, we never say no. Especially not on a Wednesday or Friday, when the Lifestyle section offers a festive spread, thanks to publicists and PRs whose regular feeding programs include the entire office.

Birthdays at the Inquirer become occasions to satisfy one’s sweet tooth as well, with tubs of ice cream in different flavors turning the office into an ice cream parlor. One time, an editorial production assistant even raised her ice cream treat to the next level by offering all sorts of toppings with every scoop.

But because our bellies can only take so much, Inquirer employees have learned the art of filing—that is, keeping some of the food in the filing cabinet (or similar empty space) to eat later. The bolder ones practise “archiving”—getting at least two plates of food, one to eat now, the others for later.

No matter how cynical we get (and we do become a little world-weary working in the media), we are, in our heart of hearts, fanatics.

When superstar Nora Aunor turned the Inquirer newsroom upside down in 2012, every member of Team Inquirer turned into a Noranian faster than you can say, “Walang himala!”

Only one other celebrity rivalled La Aunor’s popularity in the office: Filipino boxing legend, Manny Pacquiao. When Pacman had his momentous fight against Floyd Mayweather Jr. on a Sunday (in Manila), people thought the office would be empty on such a “dead” day. But they didn’t reckon with “Pambansang Kamao.” Come fight day, the Inquirer was packed—with employees from the business, admin and editorial departments. They all gave up their Sunday to root for Pacman.

But meeting our idols is not the only way we let our freak flag fly. Even TV shows can bring out our inner fanboys and fangirls.

There was GMA 7’s “My Husband’s Lover” that halted the grind in the Lifestyle section when it aired. And who can forget Maya and Ser Chief of the long-running, feel-good ABS-CBN series “Be Careful with My Heart,” which became the main event at the employees lounge during lunch breaks?

This 2015, the honor goes to two shows: the “AlDub” kalyeserye of GMA 7’s noontime variety show “Eat Bulaga,” and the James Reid-Nadine Lustre starrer, that ABS-CBN hit “On the Wings of Love.” (Some employees recently formed a group called the OTWOL PDI Chapter, of which I am a proud member.)

And no, we don’t fight over which series is better than the other. There’s a fandom for everyone. In the words of a former colleague, now an Inquirer.net editor: “I love AlDub in the morning, and JaDine at night.”

There is one thing, however, that brings out the competitive spirit in all of us: sports—particularly, basketball.

Competitive sports are to Inquirer employees what emotional stress is to Bruce Banner. No, we don’t really transform into rampaging green giants capable of mass destruction; we just turn a bit more aggressive and a lot more potty-mouthed.

Be it the NBA, PBA, FIBA or UAAP, when a basketball game is on, expect people to cluster around the newsroom’s giant TV screens, egging on their favorite teams to the winners’ circle.

UAAP basketball games are particularly rabid, with factions and rivalries springing from deep-set loyalty to one’s alma mater. Even PDI couples are not immune from the rivalry. During Season 78’s game between the University of the Philippines (UP) Fighting Maroons and the De La Salle University (DLSU) Green Archers, one section editor quipped: “UP has to win! This is the only time I can one-up my husband.” The section editor bled maroon, but her husband, a desk editor, is a true-blue (true-green?) Lasallian.

After the game, which the Maroons won (!), the whole newsroom was in high spirits. Even the University of Santo Tomas (UST) alumni in the office celebrated UP’s victory.

The sports rivalry is not limited to basketball, however. Tennis, football and the controversial UAAP Cheer Dance Competition provoke intense inter-office competition as well. (Let’s not talk about that. #Bitter)

Word of advice: If you’re going to bet on a sports team or an athlete during any game or tournament, beware someone from the Sports section. Rumor has it that whoever this person bets on, loses. Talk about being jinxed!

“Holiday” is a word totally purged from the media lexicon. They’re like unicorns: the stuff of dreams and fantasies.

Because when you work in the media, there is no such a thing as a holiday. There may be “slow news days” but no day is “no news day.” Even Christmas, New Year and Easter are no exceptions.

(I won’t be surprised if people still turn up at the office on the eve of Armageddon—just to check if this catastrophe had been spelled right.)

Having to report for work at all times has not dimmed our instinct for partying though. And boy, how we partaaaaay!

There was one Valentine’s Day celebration when a crooner serenaded the entire building with romantic songs. On another year, a shower of chocolates, roses and Guyito rained down on employees. And this year, the office had free screenings of romantic movies throughout the day.

Halloween is also a big deal at the Inquirer. There’s the traditional Trick or Treat and best costume contest for children of employees, with everyone getting into the spirit of the occasion. We’ve had a secretary dressed like a bride of Dracula, a male artist putting on a hand-made Heneral Luna mask, a Frida Kahlo-lookalike, a Black Swan wannabe, and assorted cutie cats with painted-on whiskers on their faces. One memorable best costume winner was this baby girl outfitted like a mermaid.

The Philippines may have the longest Christmas season in the world, so it’s not surprising that the Inquirer would similarly have the most number of Christmas parties this side of Makati. There’s the Inquirer Christmas/anniversary party with the much-awaited raffle, the parties organized by various departments and work groups, the celebrations by different sections in the Editorial department, and the grand editorial Christmas party with the traditional tequila shot.

When the day’s edition had been put to bed, members of Team Inquirer finally let their hair down and toss a shot of tequila. From the editorial production assistants and layout artists to the desk editors and section editors, almost everyone has done this time-honored tradition. Yes, even the editor in chief.

Another mainstay at Inquirer parties is the karaoke, with singing that goes on until the wee hours of the morning.

Everyone has his or her eccentricities and we’d probably be able to write a book if we listed down all these odd quirks. But in the spirit of full disclosure, here are some of the most notable:

For some incomprehensible reason, despite having rolls of tissue available for everybody’s use in the office lavatories, some members of the Inquirer Team insist on using the dot matrix printer paper to wipe their hands. Maybe they just like the sound the printer makes when it dispenses a sheet of paper? Or maybe they see the printer as an automatic tissue dispenser? Could the dot matrix paper be more absorbent than tissue? Nobody really knows.

No plates? No problem. Nothing can stop us from enjoying free food. We literally put the “paper” in paper plates, using clean printer paper as a makeshift plate. Even the late Inquirer publisher, Isagani Yambot, was not above doing this.

You learn a lot inside a classroom, but nothing beats the lessons you absorb on the job. There is one skill unique to Inquirer peeps, especially editorial production assistants: the ability to discern handwriting. Each editor has his/her own penmanship style, and some of these look like an obscure language—Elvish, or maybe Cuneiform? (At least none, as far as I know, is similar to Egyptian hieroglyphics. Thank goodness.) It is only through years and years of analyses and experience that you’ll be able decode these mysterious scripts.

Did you know that there’s a tiny Coca-Cola museum in the Inquirer office? If ever you’re in the area, try to stop by the Opinion section. They have this strange altar dedicated to the most famous soft drink on planet Earth.

Be careful what you post in the Inquirer. Everyone is a stickler for good grammar and correct spelling. Posters and signage with errors are vandalized with copyediting marks. Grammar nerds, that’s what we are.

The editorial big bosses are some of the most colorful people you’d meet in the Inquirer. Some even have their own “language” that you need to quickly learn as part of the job. For example, one big boss has a whole list of phrases, words and acronyms unique to his personality and working style. A hard copy of an article with the letters “BB” means you’ll have to print another copy of the same article, but with all the corrections he had noted in the first copy. If you miss one correction, the article will keep coming back to you. When he says “pindotin mo,” it means he wants you to Google or fact-check a certain piece of information. And when he says he needs “vitamins…” OK, let’s not go there.

But all that’s just the tip of the iceberg, so to speak. If you really want to know our deepest, darkest secrets, there’s someone in the Inquirer we like to refer to as the “Inquirer Black Box.” His hair may be of normal size, but the head it covers is definitely a container van of secrets.

At the end of the day, what you should know about Team Inquirer is that it’s a family—a crazy, messy, weird, sometimes dysfunctional, family, but a family nonetheless.

We may fight, argue or rant, but we also help, support and love each other. Egos sometimes clash and tempers flare, but we’re always ready to take one for the team. And that’s the whole truth, and nothing but.