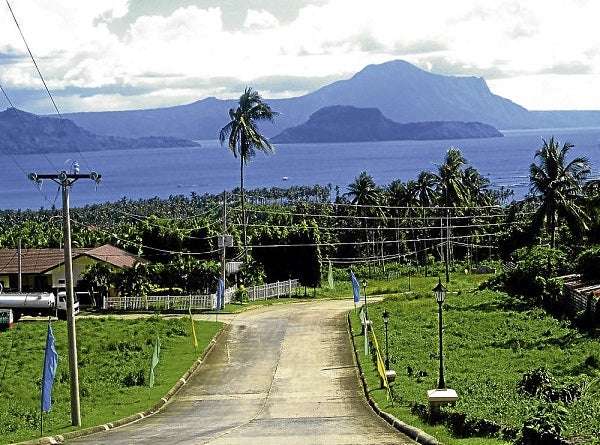 How to enjoy Taal Volcano best 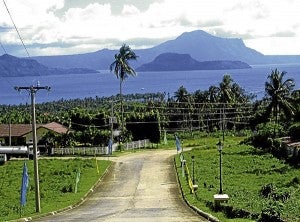 Batangas Gov. Vilma Santos’ recent suggestion to construct a sign “Batangas” on Taal Volcano, similar to the sign “Hollywood” in Los Angeles, was met with anger, laughter and disbelief.

Of course, the issue only served to confirm that not many knew that the volcano is in Batangas,  not under Tagaytay’s governance. “We are not claiming ownership,” says a Tagaytay ridge hotel owner, “but   like it or not, we still have the best view of the volcano.”

Not so, we believe. We should know, if 11 years of regular trips to the lakeshore town of Talisay, Batangas, with jurisdiction over the northern half of Volcano Island, are to count for anything.

We have also visited many of the towns surrounding the volcano—San Nicolas with control over the southern half, Tanauan, Laurel, Lipa, Balete, Cuenca, Alitagtag, and Mataas na Kahoy made famous by Aga Muhlach’s rest house.

Tagaytay has a postcard-perfect view of the volcano that tourists love. From below at lakeshore level, Talisay and environs have a view of its heart and soul, pains and skirmishes, a very private picture reserved only for those who grew up on her bosom.

Why then all this furor over Taal? 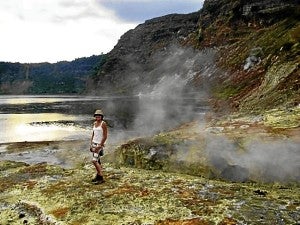 The volcano has been designated by the Philippine Institute of Volcanology and Seismology (Phivolcs) as a Decade Volcano belonging to the Pacific Ring of Fire of some 452 volcanoes, the origin of  large numbers of earthquakes and volcanic eruptions.

Taal Volcano has been quiet since 1977, with intermittent seismic activity that has resulted in evacuation warnings to those who still live on Volcano Island even if taking up residence there has long been prohibited.

They say these people are crazy, risking lives for the small benefits they get from the fertile soil.

Others say, however, these folk are the unofficial custodians of Volcano Island. They guard the volcano goddess from those with evil intentions. She and the good spirits of Taal, care for and protect them, declares Taal volcano resident Mr. Tilla. 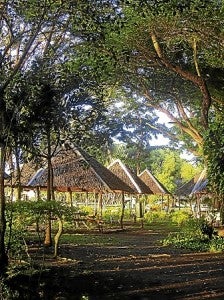 The best way to reach this famous tourist and scientific wonder of the world is to take the Tagaytay route 50 kms from Manila on the South Luzon Expressway (SLEx), exit in Sta. Rosa, go along the Tagaytay ridge and down Ligaya Drive for a picturesque steep zigzag ride, until one reaches the town of Talisay.

On the way back, take the Tanauan route via the Star Toll connecting with SLEx to Manila. Either way takes less than two hours.

For the first-time tourist, we recommend this volcano visit for several reasons: Year-round cool fresh climate (30c in May to June, 18c from November to February), the magical mystical nature of the volcano, the presence of water creatures found only in its mixture of fresh and salty waters (Hydrophis semperi sea snake, and delicious Freshwater Sardinella tawilis), the pre-Spanish submerged towns, and a population intent on paying homage to her natural beauty, and preserving its attributes.

After exiting Sta. Rosa, an interesting stop is the Coca-Cola Pavilion museum for Coke addicts and collectors where in lieu of entrance, submission of used beverage cans or plastic bottles is asked in support of Coke’s environmental protection program through recycling.

On Tagaytay ridge, with the view of the volcano immortalized in travel brochures, teem hotels of wide price range, and such restaurants as the Bag of Beans with excellent food and baked goodies in a garden setting. 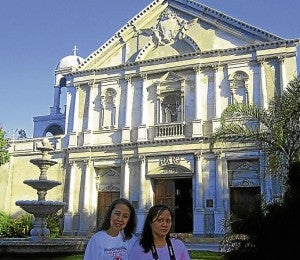 Another interesting eatery where we found both penny-pincher and SUV-riding folk is the Mushroom Burger (price range P30 to P94) started in 1976 using Taiwanese technology, and perfected locally by a Swiss executive chef. The vegetarian healthy nature of the repast is not lost on its clientele who leave comments like “never thought this could be better than meat.”

From the ridge down the zigzag, there can be no other hotel choice but the very private Meteora, once St. Luke’s medical director Dr. Joven Cuanang’s weekend hanging on a steep ravine (P10,000 for four or less with breakfast). We had visited it twice when it was still Dr. Cuanang’s private sanctuary. Now that the doctor has opened it to weekenders, nothing much has changed, we are assured, from the contemporary Philippine (Salingpusa group) artworks on display to the architecture that’s Mediterranean-inspired but with touches from Ilocos, where the doctor hails.

At the bottom of the winding road is Talisay, a small town of 39,000, where people live just as they have decades ago, oblivious to the wonders surrounding them. We are wary that technology and tourism might spoil them, that Talisay will soon turn into the monstrosity Boracay has become, that its people will desert it for the supposed comforts of city living, that marauding entrepreneurs will dig deep into its bowels in search of treasures.

We head straight to town for delicious meals at RV Eatery  at Talisay St. corner Burgos (P300 for five persons including drinks and dessert), then  settle down at the Taal Lake Yacht Club (TLYC) a few minutes from town. 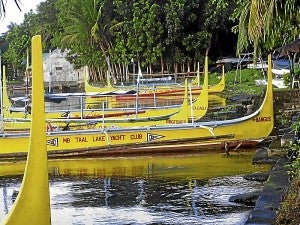 We got to know of Talisay upon meeting TLYC owner Peter Capotosto 10 years ago and regularly holding a Summer Nature and Arts Camp for Kids (SNACK) there for five years.

It was from Peter that we first heard of protecting the environment when it was not yet a byword, as he strove to ban jet skis for their noise and fuel pollution.

As a sailing exponent, he held hobie catamaran challenges monthly. His instructors taught our kid campers the groundwork of sailing, while our mountaineer instructors explained the meaning of “take only pictures, leave only footprints” in respecting the forest.

To say that Peter keeps a mean guard over the lake and volcano like he would his children would be appropriate.

Even after our children’s camp had closed, we continued to camp out at TLYC, bringing our tents and falling asleep to the sound of waves lapping on the shore, and the night birds singing their songs.

By day, TLYC is abuzz with activities as groups come in to take a boat to volcano island (P1,800 for a party of five inclusive of guide, life vest, nipa hut, parking and entrance fees on TLYC grounds) with Peter taking charge. 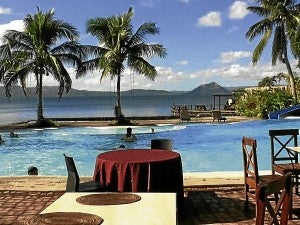 For those who prefer a real roof over their heads, however, there can be nothing better than Balai Isabel owned by realtor Nelson Terrible who sponsors the yearly Round Taal Volcano Hobie Regatta, which Peter has been holding for years (watch Balai Isabel Round Taal Volcano Hobie 16 Regatta 2009 on YouTube). Like Peter, he supports the task of guarding the island from uninformed elements.

Nelson and Peter share a passion for keeping Talisay free from the environmental ailments of big cities. Over lunch at Balai, they spoke of still having fresh water in Talisay.

“All we have to do now is protect and preserve. Wala pa tayo sa puntong ‘save.’ Let us not get to that point, “Nelson asserts. “We need to plant more trees to increase our watershed. Let’s preserve what we have.”

Peter agrees. “When we first acquired TLYC, it was all mud rushing down the hill into the lake. We planted all those trees, elevated the ground around our property as high as 6 feet from the lakeside. Those trees planted 10 years ago are what you see now. And there is no longer mud in the lake. The water is clean.”

Balai Isabel is also part of the Zero Carbon Resorts program of switching from fossil fuel to renewable energy sources like solar energy and green technologies.

Nelson’s success story is short of incredible. He acquired his nine hectare property in three batches beside each other and had simple plans for it. “Until Pepsi Cola came around and challenged me. They wanted a venue for an event for a hundred plus employees and asked me to provide this within 45 days,” recalls Nelson.

He delivered the requirements after working round the clock. This changed his life, and his plans.

“He is amazing.” Peter told us, “He built his complex when nobody was looking and called it Balai Isabel after his only child. It was suddenly just there. And the best thing about it is that he is completely Talisay home-grown.”

In five years, Nelson put to good use in Balai the years spent on his Techno-Asia Construction firm in Parañaque. He has lovingly designed every condominium unit, each different from the other, designated living areas and those with wide open spaces and trees.

Balai has rooms and villas that can accommodate thousands, eateries, massage and spa services, swimming pools, a butterfly aviary, sports facilities, a fenced-off fishing area, areas for team building, a newly built chapel beside the ruins of a Spanish period church (where Oyo Boy Sotto and Kristine Hermosa wed), and Wi-fi connection. We like to compare it to a luxury liner on the ground.

But Nelson is far from done. He spoke of putting up a zip line from end to end of his property, 450 meters along the water with Lighthouse Honeymoon Suites on both ends that would integrate wall climbing and rappelling, a sky bar, and a fantastic view of the volcano and the hills around.

We go around Talisay to search for other developments and found plant nurseries now selling fruit trees and forest tree varieties. Some of the campaign to plant seems to have taken effect.

We go to Buenavista Nature Park & Country Club, a gigantic membership club of 102 hectares still in the process of development.

On our way back to Manila, we review our nomadic weekend and the happy discoveries it has brought. But something seems to be missing.

With the country full of Unesco Heritage sites of historical churches like San Agustin, natural wonders like Banawe Rice Terraces and Tubbataha Reef, why has the lovely, unique, natural, and scientific wonder of Taal Volcano been left out?

E-mail us at [email protected]