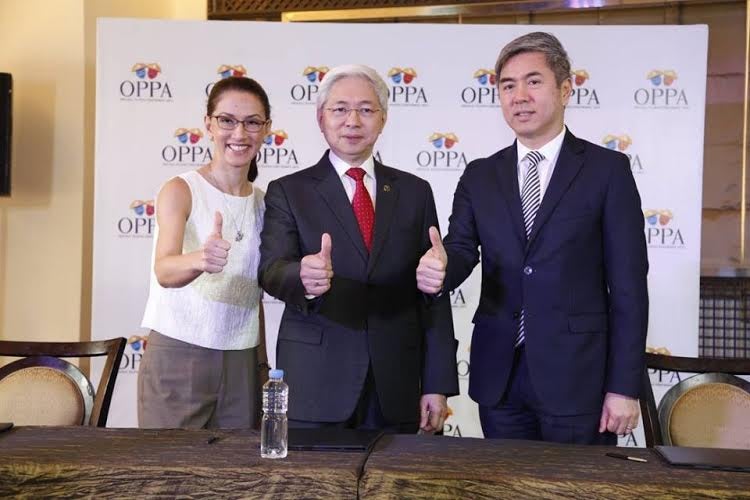 From Resorts World Manila, a P100-million push for young artists

The actors who perform on stage may be the most visible aspect of the theater that the audience recognize and applaud, but these artists would also be the first to admit that a bunch of creative talents behind the stage are equally responsible for helping them create entirely different worlds that mesmerize, entertain and challenge the audience to think.

Production designers who make the canvas a living, breathing element of the story; technical and wardrobe gurus who weave magic into what could otherwise have been a banal background; and composers who evoke emotion into the storyline with their magic—these are some of the people who are invaluable to the success of a stage production, but their number needs to increase to help further elevate the Philippine theater community, which seems to be enjoying a resurgence and a growing audience.

It is a need that the Original Pilipino Performing Arts (OPPA) Foundation intends to fill. Launched in November by the Travellers International Hotel Group, Inc., which owns and operates Resorts World Manila, OPPA will be awarding scholarship grants to promising students passionate about the theater and other art forms and who will commit at least a few years of their lives after their graduation to the profession.

With an initial funding of P100 million, OPPA will screen by the start of this year high school students and support the awardees’ four-year education, which they will complete in the foundation’s partner schools, namely, the University of the Philippines, St. Scholastica’s College, the College of St. Benilde, and the Meridian International Colleges.

The young scholars will also spend their college internship in apprenticeship at Full House, Resorts World Manila’s resident theater company. Under the terms of their scholarship, they will be employed by the hotel’s performing arts division after finishing their studies.

Menchu Lauchengco-Yulo, Full House co-artistic director and OPPA president, notes the pressing need for technical artists and craftsmen—and why OPPA has to reach out to those who have potential and passion even before they enter college.

“The established and successful designers are already very busy and their schedules have already been booked for productions way in advance,” she says. “And very few of our young, new designers have studied things like how light affects texture,  the kind of cloth you would need for a period piece. They lack training and go by pure instinct.”

“For example, as director, you end up telling them how to do the costume or show them that they are not working on the right palette,” she adds. “Or, ideally, the lighting designer should just come up with a full-blown lighting design. But as director, I end up telling them that I don’t like this particular light on this particular scene and why.”

Yulo maintains that a workshop for 40 people lasting for one to two months is not enough to immerse the younger designers in the skills they need to develop. Regular sessions where they actively work with directors on productions would be one solution. However, this kind of collaboration, no matter how productive or harmonious, usually ends when the show closes, too.

Yulo,  like other founders of theater companies in Manila, received her training at Repertory Philippines, for many years as one its leading ladies, and eventually as a director. All those years working with an ensemble of respected peers under mentors who took time to teach them gave Yulo and her peers a solid foundation in theater work, including the skills she looks out for in the younger generation of technical theater people.

Yulo admits that the prevailing culture today is different from her training ground.

“We did two seasons of 10 plays a year, matindi ang training,” she recalls. “If we were not acting, we were crewing. Today, many actors and designers go from one company to the other. They pick up the technique of this company and then the technique of that other company. It’s like learning by “oido”; for example, some artists can sing opera because they have the talent but they cannot sustain it for long because they are not trained.”

The four scholars that OPPA will choose from graduating high school seniors will learn those needed techniques because they will go through a full academic program in either theater arts, music or creative writing. Each partner school will cosponsor one student.

Aside from talent, passion for the arts and a willingness to  make a long-term commitment to the program, one other criterion that OPPA will look at in the process of selection is the financial capability (or lack of it) of the applicant.

“We want to invest in those with the right attitude, potential, talent and dedication,” says Yulo. “But we also realized that, for some, the reason they could not get the training is financial.”

Says project officer Elaine Castillo, “The screening among the applicants will start early this year. OPPA is currently occupied with finalizing the guidelines and coordinating with the partner schools. We are targeting the incoming academic year as the point of admission for our scholars.”

The scholarship will be available to high school seniors in Metro Manila for now. In time, and depending on the success of this initial venture that Yulo describes as “baby steps,” OPPA will consider extending its reach to cities and provinces outside the National Capital Region.

Design artists and other technical craftsmen already working in the industry cannot avail themselves of the program because they would not be able to commit to the four-year study that the scholarship demands. One possible alternative that OPPA will look at in the future is offering them shorter courses that they can take to augment their training, without having to give up their paying stints in the theater.

These “baby steps” may be small, but can lead to more solid, industry-building changes in the years to come.  During the November launch, OPPA chair Kingson Sian said that the scholarship is Resorts World Manila’s firm commitment “to make the Philippines globally acclaimed for its excellence in the performing arts, to achieve this through initiatives [such as] supporting local artists through grants and scholarships, nurturing the industry through more opportunities for development, and elevating its standards and capabilities by providing global expertise and resources.”