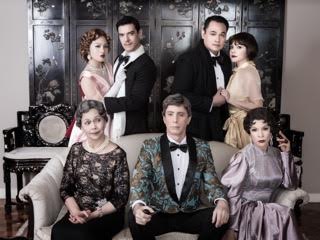 Repertory Philippines’ first play for 2016 is Ken Ludwig’s comedy murder mystery “The Game’s Afoot, or Holmes for the Holidays,” which won the Edgar Allan Poe Award for the Best Mystery of 2012.

It opens Jan. 15 at Onstage Greenbelt 1.

William Gilette, the subject of Ludwig’s comedy, is an American actor, playwright and stage manager who is said to have played Sherlock Holmes more than 1,000 times over a period of about 30 years in the late 19th and early 20th centuries. He was, however, one of the least known of the many actors who have played the role, among them Basil Rathbone, Jeremy Brett and most recently, Benedict Cumberbatch.

Ludwig’s “The Game’s Afoot” joins many of his comedies that Rep has done, including “Lend Me a Tenor,” “Moon Over Buffalo,” “Shakespeare in Hollywood” and “Leading Ladies.”

“The Game’s Afoot” is the first of three plays of the Repertory 2016 season. It will be followed by “Almost, Maine,” opening Feb. 19 and directed by Bart Guingona; and “Stepping Out,” opening April 1, a small musical directed by Baby Barredo and Joy Virata.