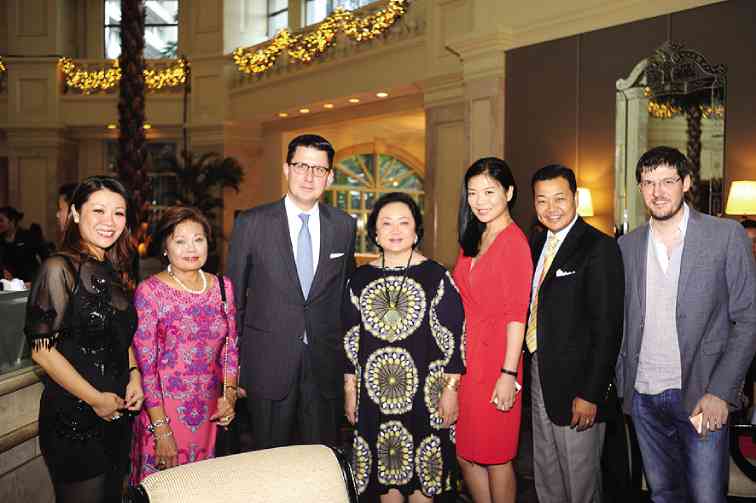 Sticking to 2 out of 5 resolutions ain’t bad

Barely two weeks into 2016 and I have already broken three of my five New Year’s resolutions. Oh well, I guess two out of five ain’t bad.

I’m optimistic about the remaining ones. First, I plan to increase my fitness level and spend more time on the mat for my yoga practice. I want to rediscover my love for Ashtanga Yoga, the method that yogi Bela Lipat encouraged me to practice a long time ago.

These are exciting times for all yogis out there. Tim Feldmann and Kino MacGregor, internationally known and loved husband-and-wife yoga teachers, are coming to Yoga Manila for a five-series weekend workshop from Jan. 22 to 24. The event will be held at the Edades function room on the third floor of Edades Tower at Rockwell Center, Makati.

Kino and Tim founded Miami Life Center and have a strong following all over the world, with thousands of students learning with them in their travels and over a million followers on social media. Both are authorized teachers of the Ashtanga Yoga method of Sri K. Pattabhi Jois and Sharath Jois of Mysore, India, and just about the closest thing to rock stars in the yoga world.

Yoga Manila is one of the pioneering yoga studios in the Philippines offering Ashtanga, slow flow and yoga for special needs. (Visit www.yogamanila.

I’m also confident that my resolution to start painting again can be attained. So far, I’ve started with the newly popular, adult, paint-by-number coloring books. Hopefully, I will graduate to a canvas by the end of the year.

I was inspired by my aunt Marivic “Mav” Rufino, a brilliant artist who is staging her 18th solo exhibit on Feb. 2 at The Gallery at The Peninsula Manila. Entitled “Luminescence Dreamscapes 2016,” the artworks reflect the artist’s fascination with the nuances of light in nature. The subjects in the transcendental realm are rare glimpses of luminescence and infinity.

Mav is also so cool because I never call her “tita.” She studied painting in both the Western and Chinese tradition (Ling Nan) under various masters in Manila and New York. Her international shows have been held in Madrid, Paris, San Francisco and Manila.

Apart from painting, Mav serves as vice chair and director of Philippine Red Cross-Makati City Branch of Rizal Chapter. Our Red Charity Gala team has been fund-raising for her chapter since we started seven years ago.

Speaking of which, let me make a quick segue to this year’s upcoming Red Charity Gala in October. Cochair Kaye Tinga, direk Ariel Lozada and I have already started meeting to plan the event. We were inspired by The Peninsula Manila’s Christmas concert and are considering including some beautiful, classical, live music at our coming eighth edition.

Kaye and I witnessed the Pen’s classical music extravaganza last Christmas season, “Celebrations: 32 Years of Christmas Concert at The Pen.” The best part was that it was not only an auditory feat but also a fund-raising show for the benefit of The Peninsula Hotels’ “Hope for the Philippines” fund.

To ensure a landmark fund-raising concert, the hotel assembled a stellar cast and put together a memorable musical repertoire accompanied by the Philippine Philharmonic Orchestra under the baton of maestro Ruggero Barbieri, featuring sopranos Rachelle Gerodias and Brigitte Van Hagen, baritone Byeong-in Park, and the internationally renowned, 50-member choir University of Santo Tomas Singers. Freddie Santos was the concert director.

The Pen’s classical charity concert was an overflowing, festive scene. The Christmas décor was created by resourceful Popsie Gamboa and her team.

Many of the charitable ladies at the concert also went to the 75th birthday celebration of Mellie Romero-Ablaza held at their family’s sprawling estate, Amelia. A printed, silk chiffon scarf was part of the formal invitation, with a dress code statement I loved: “Life is a party, dress like it!”

Upon arrival, guests were invited to the Ablaza family chapel for a simple thanksgiving Mass. Afterwards, ushers dressed in modernized barong by Steve de Leon and Ablaze Artwear & Artcessories escorted guests to the main house where a grand exhibit awaited.

A tribute display to Ben Farrales, the “Dean of Philippine Fashion,” welcomed everyone. Mellie has been known for her unique parties and affable character in social circles, and also as a standout fashionista. She credits some of her most notable pieces to Mang Ben, who has been a lifelong friend.

Jun Jun Ablaza, Mellie’s artistic son, lavishly styled a pavilion in the main grounds in a traditional Filipiniana motif. Native, woven cribs were hung on the ceiling surrounded by fresh foliage and tropical flowers. The dining tables were equally delightful with vegetables and fruits carefully placed together as eye-catching centerpieces.

The program, hosted by Tedrick Yau, began with Mellie expressing her gratitude to the guests. In her speech, she boldly stated her age. Afterwards, her grandson Santi Ablaza brought in a birthday cake.

Over lunch, a capsule collection by fashion designer Steve de Leon was presented. Entitled “Avante Garde in Filipiniana,” the fashion show was directed by Oskar Atendido, with the assistance of Michele Sison and Trixie Orobia, in collaboration with events organizer Jett Carpio. The collection showcased an evolving persona of a Maria Clara look and Mellie’s only daughter Czarina Ablaza-Syquia walked the runway in a Lady of the Miraculous Medal look.

All of which brings me to the end of this week’s column, where I suppose I should reveal the three resolutions I have already broken. Or we can just reserve all of that for next week. Happy New Year!