How will the people take the Met to the 21st century? | Inquirer Lifestyle ❮ ❯ 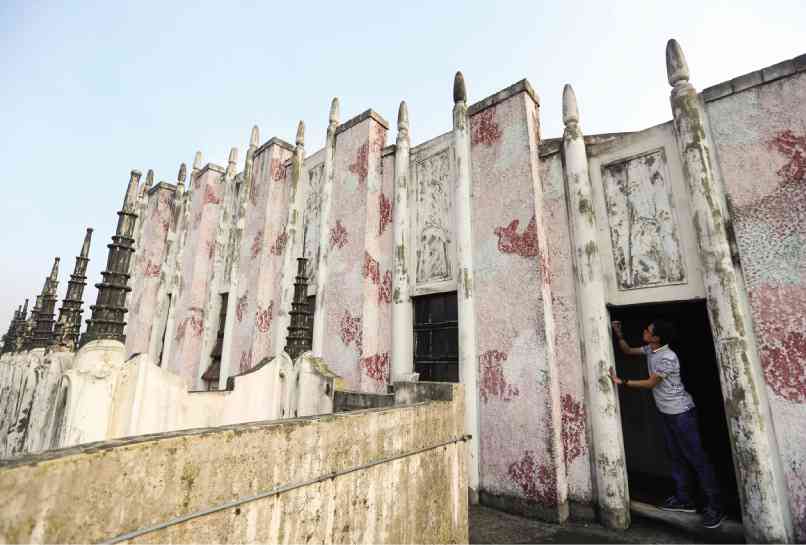 A STUDENT volunteer helping with the cleanup PHOTOS BY LYN RILLON

How will the people take the Met to the 21st century?

It’s not just a structure, it’s a repository of memory. It’s part of the national patrimony,” says Gerard Lico, the architect in charge of the restoration of the Manila Metropolitan Theater, better known as the “Met.”

Lico came to this realization after the National Commission for Culture and the Arts (NCCA), the government agency which owns the Met, launched a Facebook campaign asking for volunteers to help clean it up.

Once a proud Manila landmark, the historic Art Deco building fell into a derelict state after it was abandoned in 1996. Now a magnet for the city’s homeless, it’s been covered in garbage and graffiti ever since.

“Initially, we asked for only 50 architecture student volunteers for the cleanup drive,” he recalls. To his amazement, the NCCA was flooded with thousands of responses, and not only from students, so many that the office e-mail server crashed.

“I was surprised at the involvement of the people,” he says after the first cleanup last Dec. 12. “The community has an attachment to the building. I gave the students a tour of the building, and they were saddened by its state. It was an emotional moment.”

Lico hopes this emotional connection can help sustain public support for the restoration effort, a Herculean task that he estimates will take five to 10 years, and eventually cost more than P500 million, well beyond the P270 million given by Malacañang for the acquisition of the Met.

There are encouraging signs.

Lico says that Sen. Pia Cayetano has offered to kick in supplementary funds amounting to P43 million, to help cover startup costs. The Organisasyon ng Pilipinong Mang-aawit (OPM) and the United Architects of the Philippines (UAP), as well as the French and Spanish governments, have also signified their willingness to help.

There’s no question as to the historical importance of the Met, designed by architect Juan M. Arellano in the Art Deco style and opened in 1931 as Manila’s premier performance venue. Lavishly decorated with stained glass, wrought-iron grillwork, murals by Fernando Amorsolo and numerous sculptures, the Met hosted performances by world-class artists in its heyday.

He believes it can be so once more.

“There are many schools of thought on restoration,” he says. “I’m not a purist. We have to reinvent the building to fit the needs of modern life.”

A professor of architecture at the University of the Philippines, Lico also has a master’s degree in Art History and a Ph.D in Philippine Studies. He is the author of “Arkitekturang Filipino: A History of Architecture and Urbanism in the Philippines.”

He was also UP’s campus architect until 2014, when he returned to private practice designing institutional buildings. But he dropped most of his projects to focus on the Met when NCCA chair Felipe de Leon Jr. asked him to head the Met restoration team, a once-in-a-lifetime opportunity.

“This is what I really want to do,” he says. “This is how I want to leave my mark. I’m gung-ho on the project.”

Adaptive reuse, he says, is the key to not just restoring, but also reviving, the Met. “In restoration, you can’t just impose what you want on the people.  We realized that it would be impossible to revive the Met as a theater only,” he notes. “It wouldn’t be sustainable.  The audience just isn’t there anymore.”

In keeping with the idea of the new Met as the people’s theater, the NCCA has been conducting focus group discussions with veteran and emerging artists, cultural workers, students and other stakeholders to determine the best use for the restored building.

The Met could form part of a “culture circuit”—a network that would include the National Museum and other destinations in the vicinity.

We also have to think beyond the building itself, he says, but also take into account its environment, which includes Mehan garden, Lawton plaza and the Post Office building—an area which has sadly gone to seed in the last few decades. A comprehensive master plan for the whole area is sorely needed, he adds.

Since the NCCA doesn’t have the capacity to manage properties, Lico says it may eventually enter into a private sector partnership to ensure the restored Met’s sustainability.

For now, however, the first priority is to restore the Met.

“It looks small from the outside, but if you go inside, it’s really large,” he points out. “In fact, the theater seats 1,700.  Apart from that, there are offices all around. The intention in the 1930s was to rent out those arcade spaces.”

But there are serious problems to be solved. Water penetration in parts of the building has corroded the rebar, causing the concrete to burst.

A tunnel underneath the Met that once formed part of its cooling system has allowed water to accumulate, turning what used to be the orchestra pit into a stagnant pond. Vegetation has also grown into concrete surfaces, causing cracks.

“As much as possible, we want to maintain authenticity and integrity,” he says. “When you restore, you don’t invent what is not there. But we are not frozen in time. The 1978 restoration by Mrs. Marcos made some additions, and we will keep those additions because it is part of the history of the building. It adds a layer. We want to add a layer of the 21st century, but we will maintain the iconic status of the Met.”

Since the NCCA is the government agency charged with preserving heritage sites, the restoration of the Met should also be a textbook example of the right way to do it.

The right way begins with a consultative approach that involves the community. Hence, the continuing dialogue with stakeholders, other government agencies and the private sector.

By mid-January, he says, the entire structure will be fenced off to discourage the informal settlers who transform the Met into their dormitory after dark. The fence itself will be used as a billboard detailing the history of the Met, to educate passersby on the significance of the structure.

The public will also be allowed to see the work on the building as it progresses. Hard hats will be provided for this purpose.

In addition to student volunteers, a professional cleanup crew will be hired to dispose of the hazardous debris, including asbestos, that has accumulated inside the building.

For the preparatory work, high-tech solutions will be used, he adds. This includes 3-D scanning to determine the structural soundness of existing members, and ground-penetrating radar to study the hidden parts of the foundation.

“Restoration is a very meticulous undertaking,” says Lico. “Restoring a building is always more expensive than building a new structure. But in the end, it’s an investment in culture and the creative industries.”