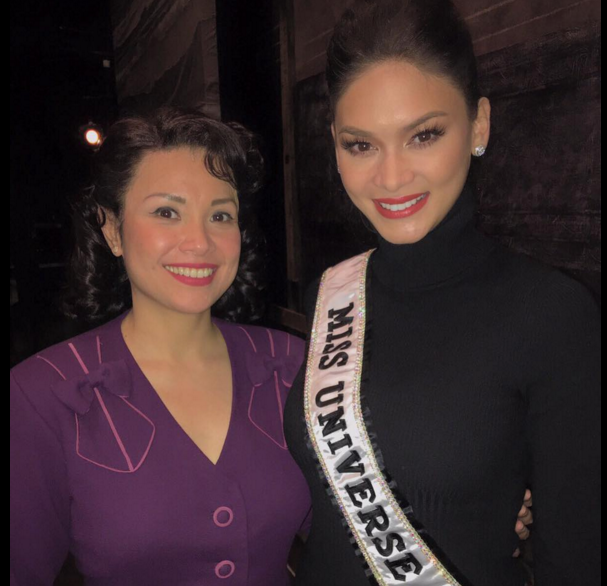 On the official Facebook page of Miss Universe, Wurtzbach said that she teared up after watching “Allegiance,” a musical which stars Salonga.

A photo of Wurtzbach wearing her Miss Universe sash and Salonga dressed for her role “Kei Kimura” was taken after the show.

“Finally watched Allegiance last night! Starring Ms Lea Salonga, who is also Filipina. Superb performance from the whole cast. I had tears in my eyes by the end of the show. #❤-Pia,” the caption of the photo read.

In her open letter to Wurtzbach which was published in the INQUIRER following her victory, Salonga urged the most beautiful woman in the universe to maximize her stay in New York City by watching musicals and eating out in various restaurants, among other enjoyable activities.

“Surely you have days off, so head down to Broadway (and even off-Broadway) for uplifting, cerebral, magical and entertaining pieces of theater. There are quite a few pieces that just opened in the last year (‘Allegiance,’ ‘Hamilton’ and ‘On Your Feet,’ among them), but there are also a few closing soon (‘Dames at Sea,’ ‘A Gentleman’s Guide to Love and Murder’ and ‘Spring Awakening,’ among them). On Mondays, when most theaters are dark, many Broadway regulars hold concerts at various venues in the city (Joe’s Pub and 54 Below are favorites),” part of Salonga’s letter read.

“Allegiance” was inspired by true events from the childhood of “Star Trek” star George Takei. The musical revolves on the story of the Kimura family, whose members were among the 120,000 Japenese-Americans whose lives were changed by the Japanese attack on Pearl Harbor. AJH