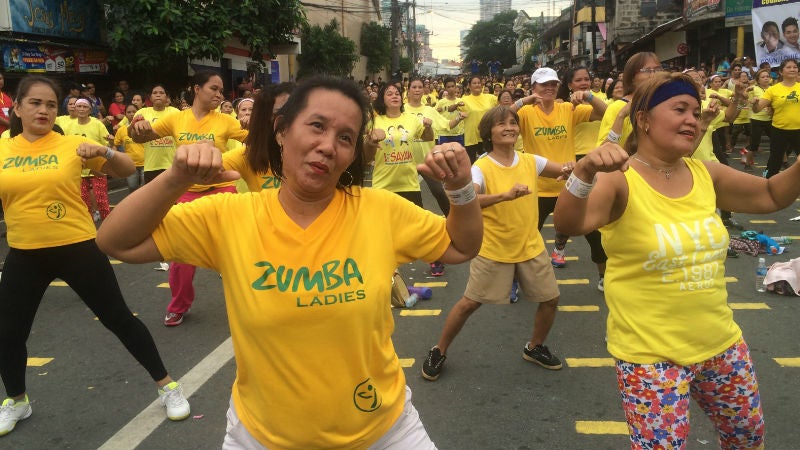 FILIPINOS were found to be health-conscious at the end of 2015 with three out of five individuals citing staying healthy an urgent personal concern, according to a new Pulse Asia survey.

The survey also showed most respondents’ national concerns were issues related to the economy.

The survey, conducted from Dec. 4 to 11, also found that between September and December, public assessment of the performance of the Aquino administration on addressing urgent national concerns mostly remained constant, with only one majority approval rating—on the issue of protecting the welfare of overseas Filipino workers (OFWs)—recorded last year.

On both the personal and national concerns survey, Pulse Asia asked 1,800 respondents—voters aged 18 and above—to cite three urgent concerns from the lists provided. They were also allowed to mention other concerns not on the lists.

The survey used a margin of error of plus-or-minus 2 percentage points.

Cited the most urgent personal concern by 62 percent of the respondents, down from 66 percent in November 2014, was staying healthy and avoiding illnesses.

The second most often mentioned urgent concern was completing one’s education (48 percent from 49 percent). Two other concerns deemed urgent were having a secure job (43 percent) and having enough to eat daily (41 percent).

Other urgent personal concerns included having some savings (remained at 39 percent) and having a house and lot (remained at 37 percent). Avoiding being a crime victim was cited by 30 percent (from 28 percent).

The only issue cited as urgent in any geographic area and socioeconomic group was inflation, with majority (54 percent) in Mindanao saying it was an urgent national concern, Pulse Asia noted. 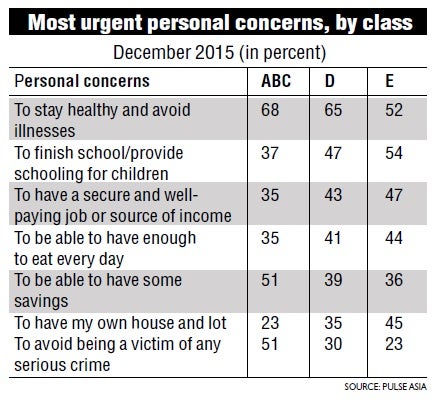 “Between September and December 2015, there are very few notable changes as regards Filipinos’ sense of urgency in relation to national issues,” Pulse Asia said, noting the +6 percentage points increase in the level of concern for the need to reduce poverty and the decline in the level of concern for increasing workers’ pay and fighting corruption in government (both at -5 percentage points).

The respondents were also asked to rate the performance of the Aquino administration on 12 issues. It was only on the issue of protecting the welfare of OFWs that the government got a majority approval score (52 percent).

Almost the same percentages of approval and disapproval were recorded on the government’s anticorruption efforts while a near majority (46 percent) are critical of the administration’s performance in controlling inflation.

Compared to the third quarter, the only marked changes recorded in the fourth quarter were decrease in the level of approval on the government’s efforts to control inflation (-5 percentage points) and increase in the indecision levels in relation to its work in the areas of fighting corruption, increasing the pay of workers, reducing poverty and controlling inflation (+5 to +7 percent points).

Events that dominated the news in the weeks leading up to the survey and during the interviews included election-related developments, such as the filing of certificate of candidacies (COC) for the 2016 elections; Davao City Mayor Rodrigo Duterte’s substitution of Martin Diño in the presidential race; the Senate Electoral Tribunal decision junking the petition for the ouster of presidential aspirant Sen. Grace Poe; rulings of the Commission on Elections First and Second Divisions canceling Poe’s COC for failing to meet citizenship and residency requirements; and the end of the voter registration period. Inquirer Research