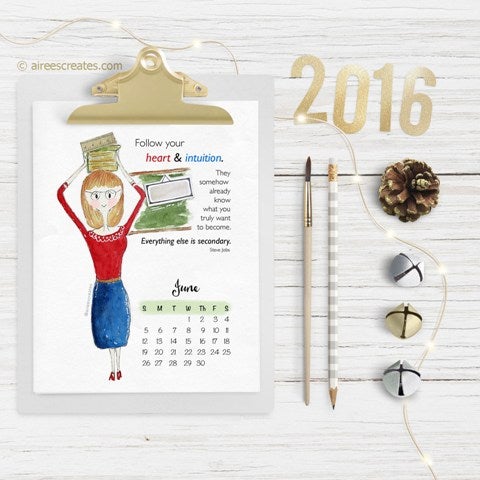 Years from now, Airees Escueta Rondain will remember 2015 as a time of personal milestones.

It was the year the self-taught artist and graphic designer experimented with Faber-Castell gelatos, Neocolor artist’s crayons and acrylic; the year she saw her colorful mixed-media creations digitized and printed on durable handmade paper products such as travelers’ journals, coin purses and billfolds; and the year she started a gratitude journal.

These creations sold well in bazaars, and her designs drew a following, especially among women.

It was also in 2015 when she ran the half-marathon distance twice.

Yet Airees will also remember 2015 as the year she experienced the ultimate wake-up call.

Last September, en route to the airport after a five-day business meeting with her handmade paper supplier in Misamis Oriental, she began feeling symptoms of asthma. She was driven to a hospital emergency room where she was treated with steroids and a nebulizer.

Back in Manila, she was diagnosed with pneumonitis and was confined in a hospital for almost a week.

But after her discharge, she felt even worse while convalescing at home. “I felt like my spirit was pulling away from my body,” she recalls. “That was the sickest moment of my life.”

Inadvertently putting her needs aside for others—the story of every mother’s life—made this 41-year-old wife and mother of two teenage kids vulnerable to illness. Her husband is based overseas.
Realizing that “you really need time to take care of yourself because nobody will do that for you,” she turned that lesson into the theme of her 2016 calendar, “She.”

A follow-up to her bestselling 2015 calendar—“dream.Big” which provided uplifting messages each month—“She” centers on different aspects of self-care, such as January’s “Be your own superhero,” May’s “Spend time with nature,” July’s “Food for the body is not enough, there must be food for the soul,” and September’s “Fall in love with taking care of yourself.”

“I’ve always been an advocate of women empowerment, and when I was doing this calendar, I thought of my different roles as a wife and mother,” she says.

“As women, we always put ourselves last—even the act of taking care of ourselves. That’s why one of my drawings is of a woman going to the salon. It’s not bad to go to the parlor once in a while!” she exclaims with a laugh.

But Airees’ followers will also note her evolving art. If there were only lips on the faces of the women in “dream.Big,” the characters in “She”—colorful, child-like figures—are rendered with rosy cheeks and line drawings of smiles and expressive eyes.

While the characters are a composite of things she learned from her online teachers, notably Christy Tomlinson, they are also Airees’ own.

October’s girl in paint-splattered overalls is her take on her own paint-stained shorts.

And her favorite, November’s illustration of a mother and son in matching baseball outfits, is her homage to her relationship with her 14-year-old.

“Friends say they look happier,” notes the artist of her latest works. “I’m happy with my style. I feel like I’m at home with these girls.”

That’s quite an achievement for someone who could only manage to draw stick figures when she started.

The youngest of three siblings, Airees describes herself “as a round peg in a square hole,” one whose artistic inclinations didn’t fit in with a family focused on traditional careers.

Nevertheless, the computer science graduate found an outlet to express her creativity when she set up a computer shop in her native Biñan, Laguna.

Originally offering typing and printing services, the venture evolved into a desktop publishing business when Airees taught herself web design and accepted jobs to do yearbooks and invitations on local handmade paper.

As successful as it was, the venture also burned her out. As a gift to herself on her 40th birthday, she picked up a paint brush and a watercolor set and began to create art, something she last did before college.

“Painting is really my first love,” she says.

“I want people to smile when they see my works,” she says.

This year, Airees might just be a mentor herself. Inspired by another blogger, Melody Ross, the artist would like to give free art workshops to woman victims of human trafficking, or possibly create an art journaling book that will encourage them to express themselves.

“I believe art is healing,” she says from experience. It’s exactly what these women need in a year of self-care.