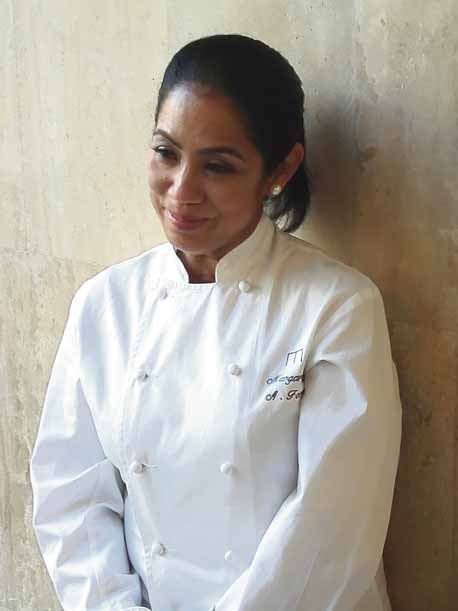 TIME TO SHINE Chef/restaurateurMargarita Fores, acclaimed by more than 300 industry experts across the region, recalls how Filipino cuisine has taken off in recent years because of the uniqueness and diversity of its ingredients. RAOUL J. CHEE KEE

“I’VE BEEN hyperventilating since 8 a.m. and my knees are weak,” Margarita Forés said shortly after being informed that she had been voted Asia’s best female chef 2016 by over 300 industry experts across the region.

This was only the fourth time that the group behind Asia’s 50 Best Restaurants gave the award, and the first time a Filipino female chef had been chosen.

“I think the heavens have been conspiring for the last three years,” Forés said Tuesday afternoon at Lusso in Greenbelt, Makati. “Now is really the time for Philippine food to shine.”

“A true leader in her country’s restaurant sector, her dedication, culinary skills and pioneering efforts have elevated the dining scene in the Philippines and set a new benchmark for other chefs and restaurateurs to follow,” he added.

Although best known for her Italian cooking, Forés is also a proud advocate of Filipino cuisine. In 2008, she coauthored “Kulinarya: A Guidebook to Philippine Cuisine.”

More recently, together with respected chef Glenda Barretto, Forés prepared dinner for 700 guests and delegates at the Asian Pacific Economic Cooperation 2015 welcome reception held in Manila in November. The dinner was meant to showcase the uniqueness and diversity of Philippine ingredients, she said.

“All these microgreens and herbs that we’ve taken for granted, that we thought were just weeds in the garden, are [ingredients] that very important restaurants abroad have highlighted,” Forés said, explaining her use of what have often been considered as lowly vegetables like alugbati (Malabar spinach) and sigarilyas (winged beans).

The recognition couldn’t have come at a better time.

This year, Forés is marking her 30th year in the food industry, as she first gained an appreciation for authentic Italian cuisine during a 1986 tour of Italy where she immersed herself in the local culture. It was in Italy where she developed what would later become her culinary style of using and cooking with only the best local ingredients.

The following year, in 1987, Forés founded Cibo di M, a catering business that soon earned a reputation for memorable banquets and customized service for high-profile clients. A decade later, she opened Cibo, her first Italian restaurant. There are now 10 Cibo outlets throughout Manila.

Forés has since branched out into other restaurant concepts including Lusso, a luxe champagne and gastro bar, and Grace Park, an ingredient-driven Italian restaurant specializing in farm-to-table cuisine.

In 2013, Forés partnered with Casa Artusi, a historic culinary institution at Forlimpopoli in northern Italy, to open Casa Artusi Philippines. Casa Artusi in Manila is the prestigious Italian school’s first and only offshore campus that is focused on teaching traditional techniques of home-style Italian cooking.

Forés will receive her award as Asia’s Best Female Chef 2016 at the fourth annual Asia’s 50 Best Restaurants awards ceremony at the W Hotel in Bangkok on Feb. 29.

Over 300 industry experts from across Asia voted on the Best Female Chef award, the same group behind the annual list of Asia’s 50 Best Restaurants, sponsored by S. Pellegrino and Acqua Panna. Since 2013, the award has recognized exceptional female chefs whose culinary skills, entrepreneurial spirit and artistry have earned them the respect and admiration of critics, connoisseurs and fellow chefs.

The academy is divided into six voting regions: India and subcontinent; Southeast Asia (south); Southeast Asia (north); Hong Kong, Taiwan and Macau; mainland China and Korea; and Japan. The divisions are designed to represent the Asian restaurant scene as fairly as possible at the current time and are agreed on by the Academy chairpersons.

Each region has its own panel of 53 members headed by a chairperson. The panel is made up of food writers and critics, chefs, restaurateurs and highly regarded foodies.

This year’s results for Asia’s 50 Best Restaurants will be announced on Feb. 29 and released live on Twitter (@Asias50Best), and later, on www.theworlds50best.com/asia. The awards will also be streamed live at www.finedininglovers.com.