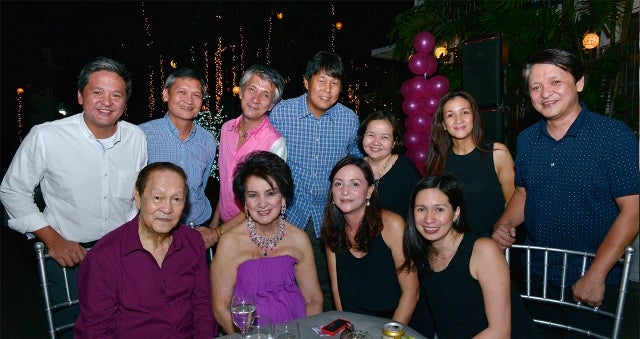 The occasion, dubbed a “celebration of life and love,” was a tribute to friends for being true and loyal to her all these years.

Held in her forest-like garden that has trees over 100 years old, the party featured performances by former Ding Mercado of New Minstrels fame, actor Ricky Davao who’s also a fine singer, and Jett Pangan of The Dawn.

Nene’s husband Jun Leonor serenaded her with romantic songs of old. Nene, in her Vera Wang gown, got misty-eyed.

The vast garden was beautifully lit with glittering sparklers, while the sound of waterfalls from the fish ponds added to the tranquil and magical ambience of the setting.

The stage was filled with fuchsia balloons. The buffet table presented great dishes made from her own kitchen, since Nene is renowned for her cooking: roast beef, lechon, paella, callos, legua estofado, Caesar salad, salmon, with desserts such as turtle pie, caramel cake, fruit salad, French apple pie, sans rival and tiramisu.

In the end, one guest commented, “Nene should hold a dinner party at least once a month.” That’s how fun it was, dahlings.

Starting from the UN headquarters in New York City, the blue light was switched on for other landmarks such as the Great Wall of China, Sydney Opera House, Maracana Stadium in Rio de Janeiro, Ancient City of Petra in Jordan, Great Pyramids in Egypt, Empire State Building in New York, Pisa Tower in Italy, and Westminster Hall in the United Kingdom.

In the Philippines, it was SM Mall of Asia’s Globe, no less, that sported the blue color when Foreign Affairs Secretary Albert del Rosario led the turning on of the switch to officially celebrate the occasion.

The event at MOA, in partnership between UN Philippines, Department of Foreign Affairs and SM, carried the anniversary theme “Strong UN. Better World.” An interactive exhibit showing the Sustainable Development Goals of the UN was held at MOA Music Hall. There was also a photo exhibit of the work of the different UN agencies in the Philippines.

SM endorser and actress Anne Curtis sang several songs; her rendition of “Lean on Me” impressed the guests, palangga.

Over the years, the Philippines has been the second home of Brazilian models who fly into the country to grace billboard ads, TV commercials and the like. We just can’t get enough of these beautiful creatures.

Paradis Manila’s “Brazilian Squad Tuesdays” will feature some of the most sought-after Brazilian male hotties such as DJs Italo Laurenthie, Romeo Calvacante and Gustavo Krier, and more.