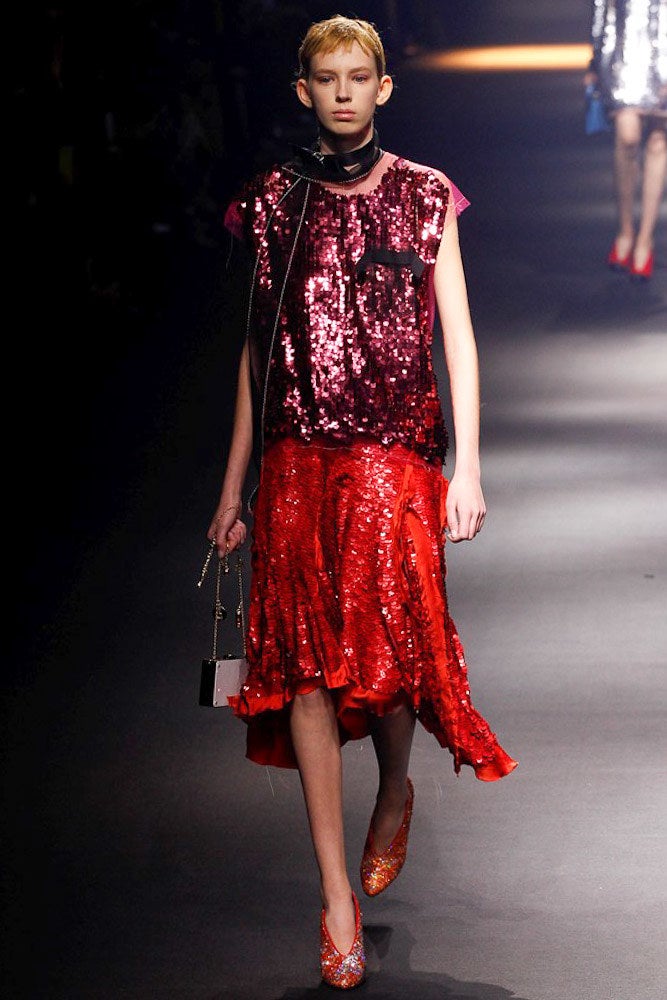 ALL THAT GLITTERS. Sequins at Lanvin

It’s the start of the year, and also the season of clearance sales in your favorite boutiques before they roll out the new-season collections next month.

But before you get hypnotized by those big, bold, red “SALE,” “Final Reduction” and “Up to 70-off” flashing beacons of impending bankruptcy, consider these as you step out and hoard the sales: You think those destroyed jeans would still look cool in 2016? Nuh-uh. Those sheer, near-naked dresses? Leave those, too, to Beyoncé in 2015.

Lesley Mobo was on point in his collection for Red Charity Gala late last year: 2016 will be all about glitter, as seen in the Spring 2016 collections, from Lanvin to Marc Jacobs to Marni.

Lingerie will be doing double duty this year, if it were up to the houses of Givenchy, Saint Laurent, Alexander Wang, Balenciaga, Celine—just a handful of designers sending out luxurious boudoir-inspired clothing for the season.

At Haider Ackermann, the final look was layered under a leather motorcycle jacket to give it a hard edge and balance out the overt sensuality of satin and lace. Ditto at Saint Laurent, where they were styled distinctly Hedi Slimane-rock ‘n’ roll, worn with Coachella-ready wellies.

There are flamenco undertones in tiered skirts at Oscar de la Renta and Kardashian favorite, Balmain. The rendering of ruffles is delicate at McQueen, where they appear as ruffs, or adorn sleeves and bodices—once again, think Mara at the Globes (who wore the finale look from the Paris collection), and Amanda Peet, who was in similar McQueen.

Not a fan of “Game of Thrones” star Natalie Dormer’s Golden Globes dress? We hear you.

But the British actress was on to one of the year’s big trends: clothing that shows off the shoulder. Forget the cleavage and the gams for a moment—or the toned midriffs of Kate Hudson and Brie Larson peeking from their awards-night cutout dresses; a new way to show skin is via the shoulder, and you won’t be giving away too much.

As the high-fashion houses elevate the street casual footwear, in both design and fabrication, sneakers and trainers will continue to rule in 2016, proving that its reign in the past year wasn’t just a moment. Premium brands like Calvin Klein and Hermes down to your favorite athletic brands will continue to cater to the pervasive athleisure lifestyle.

They’re not exactly the sexiest footwear, but like it or not, you will be seeing a lot of one of the most polarizing shoe trends there is, even from trend-setting brands like Chanel and Louis Vuitton.

The 2016 styles are also clunkier than ever. On the upside, you’ll get the height without wanting to chop off your feet after walking in them for eight hours.

If you’re after daintier footwear, go for long, pointy shapes, either on high heels or slip-on flats, which were all over the Spring runways: at Dior, Marc Jacobs, Givenchy, Salvatore Ferragamo, Proenza Schouler, to name a few.

Bag yourself a whimsical purse for 2016, to add a little fun to even the most basic of outfits. Brands to check out: Kate Spade, Moschino, Jeremy Scott, Alice + Olivia, Betsey Johnson.

A carryover of last year’s ’70s trend, bags with fringe and tassel details—at Burberry Prorsum, Altuzarra and Monique Lhuillier—will continue to make a splash this year. You will be seeing them not only in earth-tone suedes, but also in multiple colors and varied fabrications, like the tweed-like styles at Tory Burch and Diane Von Furstenberg.