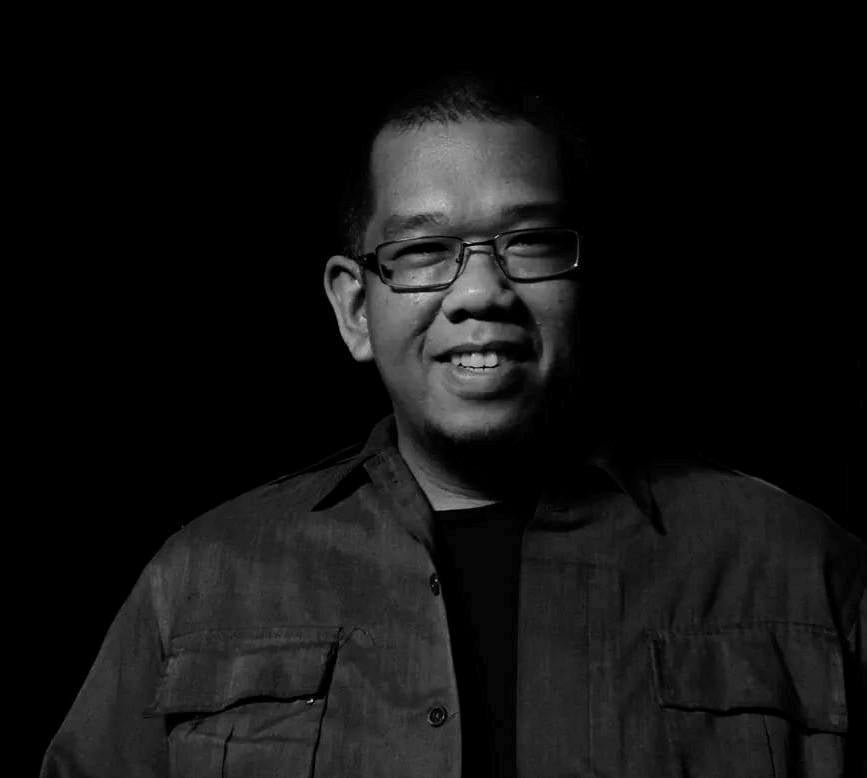 Allan Lopez, whose winning entry in the Essay category was originally a long status post on Facebook. PHOTO BY MAX CELADA

It’s his 10th win since 2000. He started off winning the third prize in either the Filipino one-act or full-length play categories and began winning first place awards in 2013 (once in the essay category).

He reveals that all the plays he’s written have been done in motels.

“I don’t usually start writing until an idea is particularly ripe,” he says. “I keep notes and drafts of little scenes in notebooks. When I know how to start and end a piece of work, I check in a motel for 24 hours, sometimes 12. The limited time helps me focus.”

“Motel rooms are just basically boxes; they remind me of Tanghalang Huseng Batute at the Cultural Center of the Philippines (CCP). It’s all part of the spirit of the place. It is, after all, a space where people pretend, in the most intimate way.”

Lopez became interested in theater while he was a Speech Communications major at the University of the Philippines.

“I fell in love with a production of  ‘Who’s Afraid of Virginia Woolf?,’” he says.

He also became a fan of “plays staged in intimate venues” after watching plays by Harold Pinter and Samuel Beckett staged at the school’s Teatro Hermogenes Ylagan.

Lopez says he began to realize his love for “dialogue and its power.” He took a playwriting class under Rene Villanueva and “that’s when I decided that I wanted to be a writer for the theater.”

This was the same time he was exposed to classical music through the school library’s records collections. He says the simultaneous epiphanies of music’s rhythms and dialogue’s timings inform how he crafts tension when writing scenes.

“I’m conscious of how words flow, the cadence of statements uttered, the silences, the time involved. Sometimes a
concluding monologue can be compared to my interpretation of the harrowing final minutes of a music piece.”

Lopez says that his play “Anatomiya ng Pag-Ibig” is his dramatization of Bach’s “Goldberg Variations” and that the structure of his “Higit Pa Dito” is based on Beethoven’s “Moonlight Sonata.”

His works have been staged in the annual Virgin Labfest as well as by campus-based theater groups.

“Some of the groups just approach me; some don’t. Some of them get guidance from their school and approach me in a very formal way; first asking permission, negotiating a fee, then requesting a brief meeting with the director and cast.

“Some just message me on Facebook with an invitation for their show. Some never tell me about the production at all.”

Lopez wants students and educators to know that they shouldn’t be intimidated by the possibility of royalty fees.

“Generally, if they sell tickets, I request for a reasonable fee. If they don’t sell tickets or if they’re staging it for a cause, like a fund-raiser, I can skip fees altogether.”

Lopez says ideas can strike anywhere. His entry last year was a result of a “sentimental moment” he had while riding a bus years ago. He’d written down a few thoughts on a piece of paper. “I told myself that one day I’d write a play with this title.”

He found that piece of paper recently, evoking strong images that resulted in his winning entry.

That one time he won in the Filipino essay category? He hadn’t prepared any entry for the play category last year so he submitted a (long) Facebook status post he’d written. It won first place.

To inquire about permissions and royalty fees for staging his plays, e-mail Allan Lopez at [email protected]