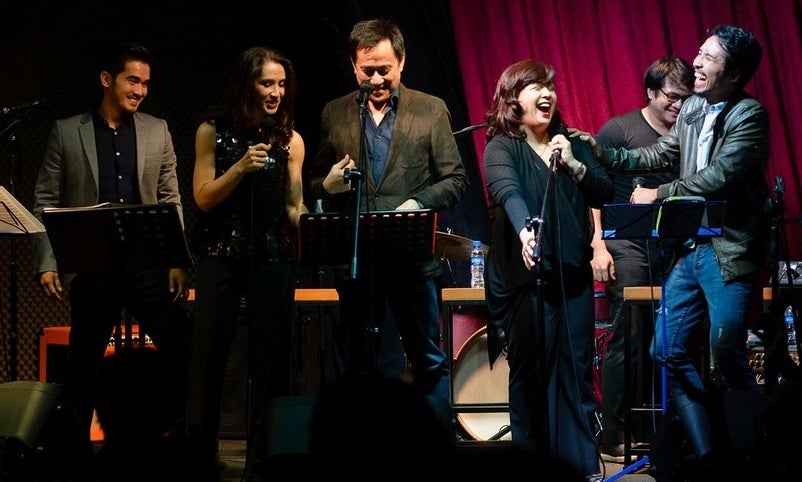 ‘Hart, Rodgers and Hammerstein’: Oh, what a beautiful evening

If there’s one thing Audie Gemora and Menchu Lauchengco-Yulo taught us during “Hart, Rodgers and Hammerstein,” the first evening of this year’s “One Night Stand” cabaret series, it’s that dusting off a classic and making it sound new is a skill apparently only a few are gifted with.

No longer was the cabaret merely an arena for roof-rattling belting, as was the case with Ejay Yatco’s concert (in our book, “One Night Stand’s” best night so far); or a venue for celebratory nostalgia, as in last month’s landmark reunion concert of the “Rent” 1999 Manila cast.

With these two pillars of our English-language musical theater, the watchword was interpretation, the evening transformed into a classy master class in singing some of the oldest and most beloved titles from the canon like they’re being sung for the first time.

The likes of “Blue Moon,” “My Funny Valentine” and “Where or When”—titles whose theatrical origins are probably lost to many nowadays—seemed to acquire a refreshingly modern-day burnish in Lauchengco-Yulo’s hands.

Mind you, they weren’t particularly polished renditions as far as vocal technicalities were concerned, but good luck finding anyone who could match the amount of heart and passion that Lauchengco-Yulo infused into those songs. These days, you’d be hard put to find a more expressive musical theater voice.

Gemora, with his take on “Soliloquy” from Rodgers and Hammerstein’s “Carousel,” accomplished an even tougher feat: making a stand-alone song out of a musical theater number that would otherwise feel like a fish out of water once removed from the context of the show.

With lesser performers, “Soliloquy,” written as a seven-and-a-half-minute rambling monologue by the show’s antihero Billy Bigelow, would have no doubt come across as indecipherable, even alienating, to those who are unfamiliar with it.

Gemora, instead, made you appreciate the song in its entirety and singularity. Lines like “You can have fun with a son, but you gotta be a father to a girl” suddenly made much more sense, as one surprisingly grasped the ideas of fatherhood and parental sacrifice, the simultaneous uncertainty and joy of discovery, at the tune’s core.

It’s the kind of insightful song delivery, in which every phrase is picked apart and meanings unraveled, that sets Gemora and Lauchengco-Yulo apart from the rest of the thriving local musical theater scene, including the night’s three other performers—Teenee Chan, Al Gatmaitan and Pepe Herrera.

Gatmaitan, in particular, struck you as a lion compelled by space constraints to act like a lamb. His soaring operatic voice was in no way suitably matched to the intimate interiors of Twelve Monkeys Music Hall and Pub, as evidenced by his wavering “Younger than Springtime” (from “South Pacific”).

On the other hand, Chan, whose soprano has been the sparkling delight of her ensemble appearances in such shows as Repertory Philippines’ “Jekyll and Hyde,” was all script and formality, the very antithesis to cabaret’s laid-back, spontaneous nature.

Nevertheless, she served up two of the night’s highlights—an appropriately steamy “I Enjoy Being a Girl” from “Flower Drum Song” and what many have described as the consummate Broadway love song, “If I Loved You” (as a duet with Herrera).

Speaking of Herrera: Thank heavens this cabaret got him, or the air of old-world, venerable nobility that pervaded the evening (these are classics with a capital C, after all) would have succeeded in turning it into a stately affair more fit for a spruced-up ballroom in Buckingham Palace.

Employing his peculiar brand of humor—best described as the mutant love child of the Filipino barok and pasimple—Herrera was the anchor that kept the evening firmly earthbound, the welcome antidote to any moment that packed on more than the acceptable amount of musical theater elitism.

Together with Lauchengco-Yulo, he took on “Bewitched, Bothered and Bewildered,” and the result was a sexy, sparky and daring duet dripping with earnest longing and leaving a playful wink in its wake. It was, for this writer, the number that best captured the spirit of the night—a grand old dame of a song rendered breathtakingly new.

The next “One Night Stand” cabaret is on Feb. 2, Tuesday, 9 p.m. at Twelve Monkeys Music Hall and Pub in Century City Mall, Makati City.