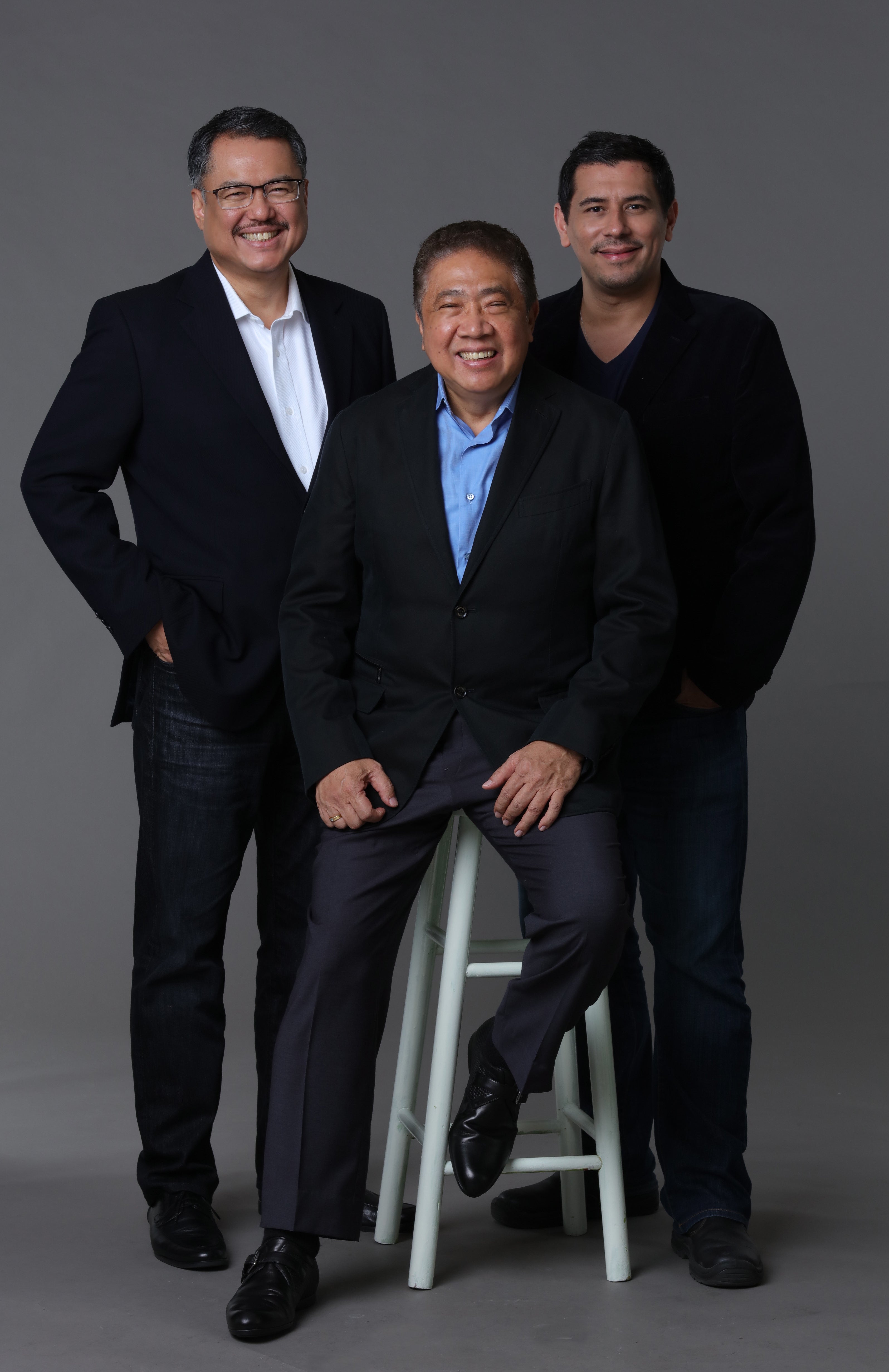 Bobby Barreiro, Tony Tuviera and Bobby Garcia of Atlantis Theatrical Entertainment Group (Ateg). In celebrating Filipino talent in whatever form, Ateg’s message for all Filipinos, audience and artists alike, is “Be proud of who you are,” says Barreiro. PHOTO FROM ATLANTIS THEATRICAL ENTERTAINMENT GROUP

After decades of making television shows and transforming their talents into stars (just recently, the phenomenal AlDub love team), Bobby Barreiro and Tony Tuviera are working toward realizing their dream of bringing Filipino artists to the attention of an Asian audience.

And they have started with theater, stoking a personal passion for the art form which they have long enjoyed as private members of the audience.

Barreiro and Tuviera are the producers who make up two thirds of Atlantis Theatrical Entertainment Group (Ateg); resident director and Atlantis founder Bobby Garcia is the third.

The current organization is a merger of Garcia’s original theater company Atlantis Productions, and Ten Bridges Media, owned and managed by the first two gentlemen.

The partnership was formed in 2014, and Barreiro and Tuviera had their first crack at producing musical theater when they mounted “Ghost,” which starred Christian Bautista and Cris Villonco and was directed by Garcia, in 2014.

For 2016, Atlantis will be showcasing two musicals: “Jersey Boys,” the hit musical about Frankie Valli and the 1950s boy band the Four Seasons; and “Fun Home,” the award-winning piece on a lesbian daughter’s coming-to-terms with her gay father.

Ateg’s version of the disco-movie-turned-theater-showcase “Saturday Night Fever” might also tour again in other countries in Asia, after finishing a profitable run in Singapore and Malaysia in 2015.

No dates have been set as of press time, but all of them will open by the last half of the year, probably to avoid a collision with the Australian run of the Schonberg-Boublil musical, “Les Misérables,” which runs at The Theatre in Solaire from March to May.

A sound marketing strategy is part and parcel of the package that Barreiro and Tuviera bring to their game. Aside from the usual standards of quality and audience preferences, the two always consider other factors such as the material’s suitability for a Filipino cast, who are expected to perform at their best, and the feasibility of touring the same production to a wider audience outside the Philippines.

A case in point was “Saturday Night Fever.” Despite positive reviews and ticket sales, the musical, which was a different version from the one seen in New York, made more money in its Singaporean and Malaysian tour than it did in its Manila performance.

It was part of their learning curve, says Barreiro. “We had to import talent, not just the actors but even the crew; the lighting and sound directors came from New York and Australia. We had to import sets from Australia that could be rebuilt here. But we wanted to come up with something that we could be proud of and bring, regionally.”

The casting of the Caucasian leads in “Fever” was done with an Asian audience in mind, Barreiro admits. Still, he and his partner are working for the day when they can bring a majority of Filipino talent to theaters outside the Philippines through musical theater, and in time, perhaps through other kinds of performance arts like concerts.

“All you have to do is look at the international talent shows to see Filipinos excelling,” says Barreiro. “Our studies showed that, in some countries like Malaysia, if you put up a sign outside a club that says a Filipino band is playing, the audience would increase. Tony and I wanted to promote Philippine talent, and not just the bands. We came to Bobby, whom we had worked with in certain projects at GMA 7, and our visions aligned.”

The Atlantis duo also sees the establishment of new theater venues in the country—such as Resorts World Manila’s Newport Theater, The Theatre in Solaire  and the Power Mac Center Spotlight in Circuit Makati—as a virtual invitation to develop more shows.

“You have theaters, but you do have to develop the content for the market. The Filipino theater market is small; we are more for concerts and movies, and we are heavy users of TV.  Plus, a limited number of runs in a theater that has a limited number of seats makes the cost of tickets high. That’s why we were happy with theater successes like Peta’s [Philippine Educational Theater Association] ‘Rak of Aegis.’ We are now finding a way how to price our tickets to make them more affordable to a broader market.”

Tuviera adds that while the Filipino theater audience is still small compared to concert-goers, “it seems to be growing. People look forward to the next shows and ask you about it, and a lot of them are young.”

Singapore, meanwhile, “is building new theaters and they have to put content there,” says Barreiro. “But to always import shows directly from the United States or United Kingdom is expensive. You also have to keep logistics in mind. The cost is making some Singaporean producers look at other options. Our objective is to create top quality shows [for these international theaters] at less cost.”

Their success in Manila and other Asian cities has brought Atlantis to the attention of theater operators outside the Philippines. The licensor of “Fever” offered to bring their interpretation of the dance-musical to Japan and Korea.

Some Asian theater producers have also begun talks with them on partnership possibilities not necessarily limited to musical theater. Atlantis, for instance, was tapped to oversee the Manila talent casting for the London run of “Here Lies Love,” the David Byrne-Fatboy Slim musical about Imelda Marcos.

Western musicals with familiar titles and a proven audience record, but performed mostly by Filipino talent—that is the driving vision of Atlantis. However, a homegrown original musical is also in the works, although the producers are wont to give scant details at this time.

“It is Filipino, but it can cater to a bigger market because of the story,” says Tuviera. We had initial plans to test it first as a short piece with a small audience, but decided to just move forward and develop it into a full-length play.”

Barreiro adds, “It will reach out to the OFW [overseas Filipino worker] audiences. In producing Western musicals, I have asked myself if we are just catering to the elite.” But, in celebrating Filipino talent in whatever form, he says Atlantis carries a bigger message for all Filipinos, audience and artists alike: “Be proud of who you are.”

(Editor’s note: This story has been updated to correct “Fun Home”s description as about a lesbian, not heterosexual, daughter.)