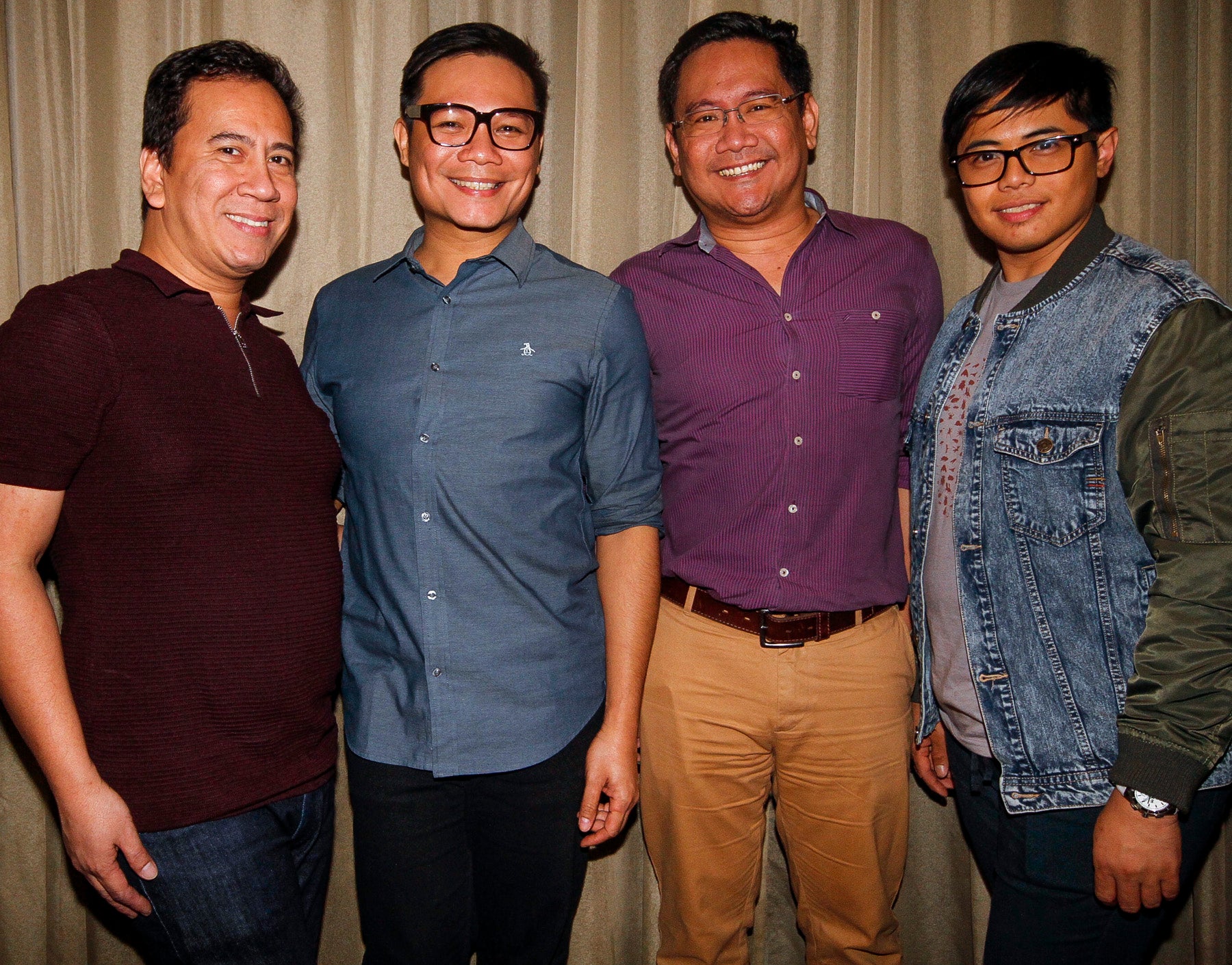 What’s in store for Jonas Gaffud and his fellow Aces after Pia Wurtzbach?

PROMISES are made to be broken.

After going on record a few years ago that he would retire as beauty queen mentor should he achieve his goal of ending the country’s decades-long Miss Universe drought, talent manager Jonas Gaffud has now decided not to disband Aces & Queens.

For over a decade now, Aces & Queens, the group he formed with fellow beauty pageant aficionados, has been responsible for training a good number of the Philippines’ representatives to Miss World and Miss Universe, including current titleholder Pia Wurtzbach.

“I now realize that you just don’t put an end to it once you’ve reached your goal,” said Gaffud, whose day job is running Mercator Artist and Model Management, Inc. “As you grow older, you also become more seasoned as a mentor. And you can use this experience to influence and mold succeeding batches of young, ambitious women.”

Since Binibining Pilipinas has yet to hold its first screening, Gaffud requested that the names of Aces & Queens’ new batch of girls be withheld until they’re officially chosen. A couple of professional models, flight attendant and one of last year’s Binibining Pilipinas contestants are reportedly joining this year.

Gaffud and his collaborators scored a series of near wins when their girls landed in the Top 5 of Miss Universe beginning with Venus Raj in 2010.

They finally scored their first big win when Megan Young won Miss World in 2013. Their labor of love was again rewarded when Wurtzbach finally won Miss Universe, arguably the world’s most prestigious beauty pageant, last month in Las Vegas after a 42-year wait.

Fresh from their trip to the United States, Gaffud and fellow mentors Arnold Mercado and Bessie Besana, shared their thoughts in an exclusive interview with Inquirer Lifestyle during Aces & Queens’ victory party.

With them were Binibining Pilipinas Intercontinental Christi McGarry and Miss World Philippines Hillarie Parungao. The former recently ended up first runner-up in Germany, while the latter cracked the Top 10 in China.

“December was such a busy month for Aces & Queens since we had three girls to look after,” said Gaffud. “Only a day or two separated their respective contests. The last to see action was Pia.”

Since they only had US visas, Gaffud and company chose to fly to Las Vegas to personally supervise Wurtzbach. Thanks to technology, the group was also in constant communication with McGarry and Parungao through WhatsApp.

“We had separate chat groups for each girl,” said Besana. “All of them were trained well before they flew to their respective pageants, but it was still important for us to keep their spirits up by constantly communicating with them.”

It was exhilarating and stressful at the same time, as the group, including members of Aces & Queens in Manila led by Q and A coach Nad Bronce, communicated across different time zones on such concerns as the girls’ makeup, gowns, hairdo and accessories.

“They constantly sent images to us for our approval and criticism,” said Gaffud. “We were aware of what was happening to them, down to the pair of earrings and shoes they were going to wear.”

Even Wurtzbach sent images from Las Vegas via WhatsApp as she waited for Gaffud’s arrival. Just before her crucial preliminary interview, for instance, she sent a picture of her sporting big curls.

When Gaffud and company saw the picture while driving to Las Vegas from Los Angeles, they immediately reached a consensus: Wurtzbach needed to wear her hair up instead.

“I didn’t mince words,” said Gaffud. “I immediately messaged Pia. Your hair, I said, doesn’t flatter you. It’s perfect for your high school graduation, but not for Miss Universe. With only hours to spare, she had it revised in favor of the classic bun.”

To her credit, Wurtzbach never took such criticisms personally. When in doubt, she would always consult and defer to her mentors’ inputs.

The only time she put her foot down was days before the preliminary judging. Instead of wearing a black column with silver accents provided for her by Binibining Pilipinas, she insisted on wearing a red gown.

Wurtzbach was convinced that red flattered her after she received compliments from fellow contestants a few days earlier for wearing a red dress to the preliminary interview.

“The blue gown Albert (Andrada) made for her was really for the finals,” said Gaffud. “We also considered it as an option for the preliminaries, but Albert wasn’t able to fly earlier with the gown to Las Vegas.”

Oliver to the rescue

Since she didn’t have a red gown, it was up to Gaffud to call his contacts. He ended up calling Los Angeles-based Filipino designer Oliver Tolentino, who was then on a ski vacation in Aspen.

He readily said yes. But who would deliver Tolentino’s gowns to Las Vegas on time?

As fate would have it, former Binibining Pilipinas International and Aces & Queens alumna Bianca Guidotti, Wurtzbach’s good friend, was in LA. She ended up driving from California to neighboring Nevada with nine gowns on loan from Tolentino’s Beverly Hills shop.

Guidotti arrived in Las Vegas on the eve of the preliminaries. After trying on the gowns, Wurtzbach’s choices boiled down to two—a fully beaded midnight blue column and a red, partly beaded and sleeveless crepe de chine gown with a mermaid skirt and thigh-high slit.

“We now all know what she ultimately chose,” said Besana, Aces & Queens’ resident fashion consultant “Both gowns fit perfectly, but she ended up going for the red one.”

Contrary to earlier reports, there was nothing wrong with the black and silver gown Binibining Pilipinas originally wanted Wurtzbach to wear, Gaffud added.

The fit was “okay” except for the fact that the gown was a tad short if worn with six-inch platforms. Had she worn anything lower, Wurtzbach would have been dwarfed on stage by her statuesque rivals.

“Everything we did had the blessings of Mrs. (Stella) Araneta,” said Gaffud. “She was still in transit when we were deciding on what Pia should wear, but we regularly informed her through her staff in Manila. In the end, the only thing she wanted to know was if Pia felt ‘beautiful’ in the red gown.”

Gaffud went on to defend Araneta, chair of Binibining Pilipinas Charities, Inc. (BPCI). Unlike other local pageant owners, it’s only BPCI which spends for its winners’ wardrobe, “down to the toiletries.”

In defense of madame

“How many pageant directors do that,” he asked. “Only Madame Stella does. Like us, she only wants the best for our girls. Instead, she is vilified by countless pageant fans and online forums for every article of clothing our beauty queens wear. I think that’s unfair because judging is limited to the preliminaries and finals.”

For nearly two decades, winners of Binibining Pilipinas only wore gowns provided for them by BPCI. These gowns were either bought off the rack in the US or designed by Colombian Alfredo Barraza.

This year, Araneta made an exception by tapping Andrada, a former Dubai-based Filipino designer, to do Wurtzbach’s gown and costume. Does Gaffud see a sea change from hereon?

“I’m not sure,” he said. “It would definitely be better if the girl gets to choose and wear the gown beforehand in private so she could practice in it. But it’s not for us to decide. In the end, we can’t do anything.”