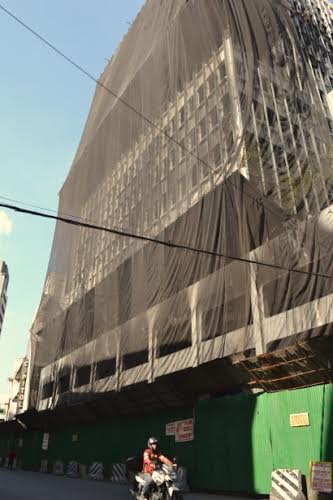 THE ICONIC Philippine National Bank (PNB) building on Escolta Street in Manila is set to be razed to the ground, the latest of a string of heritage conservation issues in the city under the administration of Mayor Joseph Estrada.

Designed by architect Carlos Arguelles, the building was constructed in 1962 to 1965 in the international style and is a presumed important cultural property under the National Heritage Law of 2009.

Arguelles (1917-2008) took up architecture at the University of Santo Tomas and Massachusetts Institute of Technology. He became dean of the then UST College of Architecture and Fine Arts from 1954 to 1959 and named one of the country’s culture heroes during the Cultural Center of the Philippines Centennial Honors for the Arts in 1999.

The building “is a wonderful example of the international style but adapted to the Philippine setting [like the] climate, the context of Escolta,” said architect Dominic Galicia, president of the International Council on Monuments and Sites (Icomos), an advisory body to the United Nations Educational, Scientific, Cultural Organization (Unesco).

He explained that the building was “materiales fuertes” or strong since both its contractor, David Consunji and Arguelles, were at their best during the time of its construction.

Galicia also underscored PNB building’s importance to the economic and architectural history of the country as well as its cultural significance.

“For me as an architect, people should continue to see how a tall building can relate to its urban setting in a way that is humane and respects the street,” he said.

The structure he said was “really built wonderfully, strongly and beautifully” later explaining that the fire that consumed the multistory edifice in January last year did not destroy it.

He cited a fire that affected the other half of the Insular Life building in Makati sometime in the 1970s where the building was not demolished after the incident but retrofitted instead, the same process that heritage advocates were recommending to save the PNB.

He said Icomos Philippines is pushing for its assessment before any action is undertaken on the important building now owned by the city government of Manila.

The building was not assessed “but instead what’s happening [now], it is already being demolished.”

Galicia expressed that for many architects, the building is an important symbol of the Filipinos best in the field of architecture.

“How do we express ourselves as a nation, the greatest that we hope to achieve as a nation in architectural terms?” he asked.

“I think we already expressed it,” he added, alluding to the demolition of the PNB Building on orders of the Manila government headed by Mayor Joseph Estrada.

The building changed ownership in 1996 after PNB was privatized. It became the City College of Manila for many years until it was abandoned few years ago.

For Galicia, the demolition of the structure would greatly affect the architectural heritage of Escolta, the old commercial district of Manila known for its Art Deco buildings.