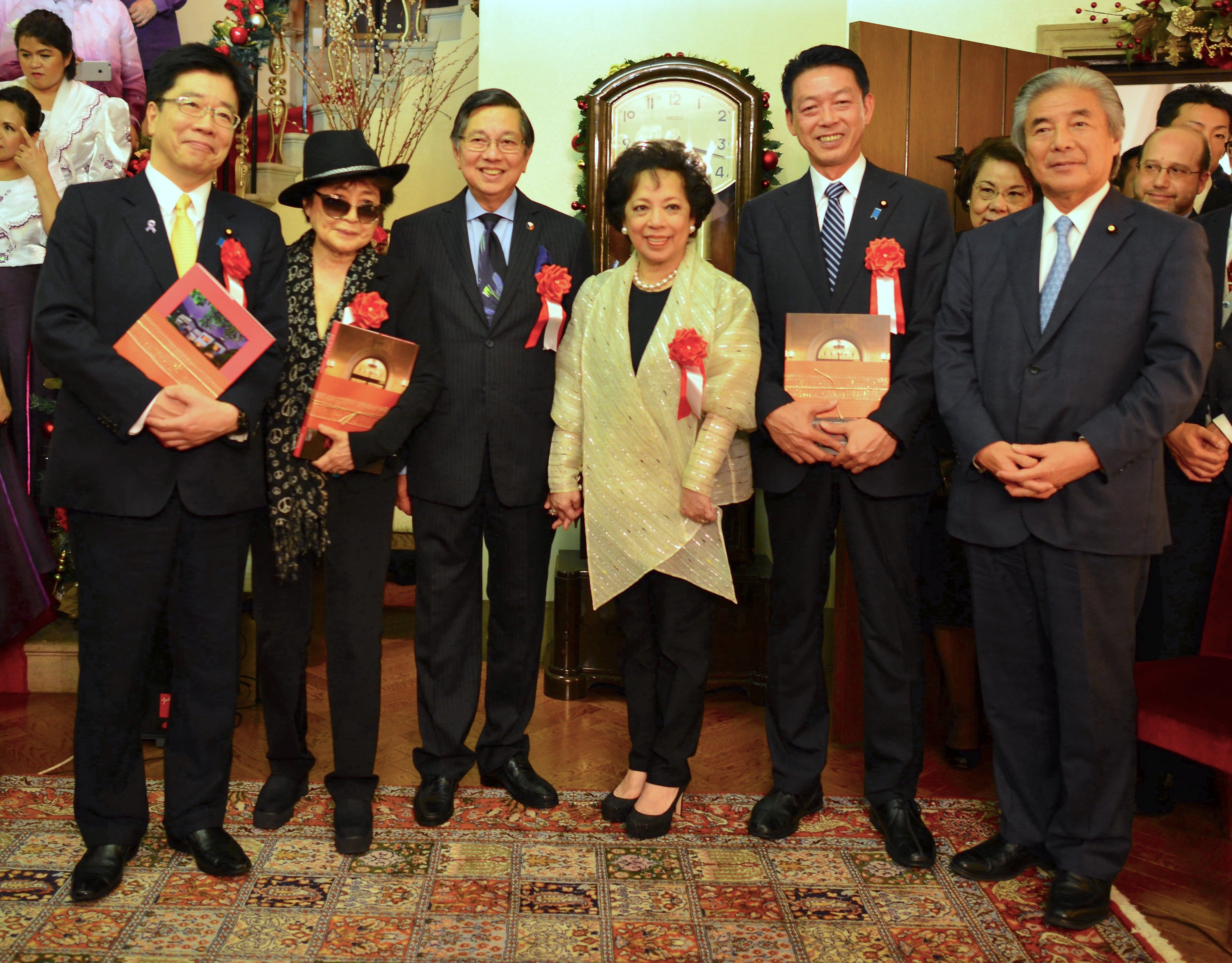 Yoko Ono comes home: Up close and personal for a few minutes

TOKYO—At the invitation of Ambassador Manuel “Manolo” M. Lopez and his very warm and gracious wife, Maritess, Yoko Ono came home, in a manner of speaking, last Nov. 10 to her ancestral house in Tokyo, The Kudan.

The occasion was the launch of the book, “History and Heritage of the Kudan.”

Built in the early 1930s in the Iberian style of architecture, the Kudan has been the official residence of the Philippine Ambassador to Japan since 1944.

The book chronicles over 80 years of stories and events. It was commissioned by Lopez, Philippine Ambassador to Japan, and written by historian Ambeth Ocampo.

It also highlights the need for the historic, cultural and architectural preservation of the Kudan.

Ono—known to the world as the widow of John Lennon of the Beatles—lived a part of her childhood with her mother Isoko Yasuda-Ono in this home built by her uncle Iwajiro Yasuda.

She recalled: “Initially, my mother lived in their house while she was pregnant with me and briefly after I was born. The family members all stayed in grandfather’s and grandmother’s house when they had nowhere to go, since, as the tradition, their house was considered to be the main house of the family in those days.

“But when my uncle got married, his wife told him that she could not stand to live in the main house. The kitchen was so far from the dining room, everything on the plates were cold by the time they were brought to the dining room. So my uncle and my aunt had Kudan House built for their use. That is why the Kudan House has the dining room right opposite to the kitchen.”

Ono shared her thoughts on the Kudan residence:

“Kudan House expresses the peaceful beauty of the Old Japan. There is just one other grand house next to Hotel Okura which is now the residence for the American Ambassador. Other than those two houses, not one private house remains in Tokyo of such elegance and class.

“In its heyday, Kudan House was visited by princes and princesses, artists and diplomats, all of whom were admirers of the incredible beauty and sophistication of my aunt. Even during the blackout nights, my aunt, who was a rebel at heart, gave dance parties as the enemy planes were roaring in the sky. The servants put up black curtains in every room and the
devil-may-care aristocrats kept dancing till dawn. Us children were told to go to bed early. Once we made sure our nannies were nodding off, we sneaked out of our beds and sat at the top of the stairs to see the ladies in great evening dresses walk by. I remember my elder cousin telling us to be absolutely quiet.”

She also launched “Yoko Ono: Mended Cups,” an Illy (the coffee brand) art collection that consists of six cups that bear gold, “shuttered” and “mended” crack lines with saucers that state in Ono’s handwriting six catastrophic events that have affected the world. Some have directly affected her life, others indirectly, yet bringing death to millions of people. Each saucer states the date and place of the tragic event and concludes with words, “Mended in 2015.”

The seventh cup, “Unbroken Cup,” is untouched, with no crack or mended lines, reflecting peace and hope with her handwritten words on the saucer. “This cup will never be broken as it will be under your protection.” (I’m proud to say I purchased the
seventh cup in Rome last December.)

With her distinctive vocal style, she has had two concerts in 2015—“Yoko Ono Plastic Ono Band” at the Museum of Modern Art New York and the Rumsey Playfield New York.

Though her art has been long overshadowed by her image as a pop culture icon and widow of Lennon, she clearly lives
life to the full and with amazing positive energy.

The few minutes with her have left me inspired to keep “being, doing and reinventing.”

She is a strong and healthy octogenarian, and who knows what she has up her sleeve for 2016?

She has clearly defied the 65-year retirement age rule and is unstoppable.