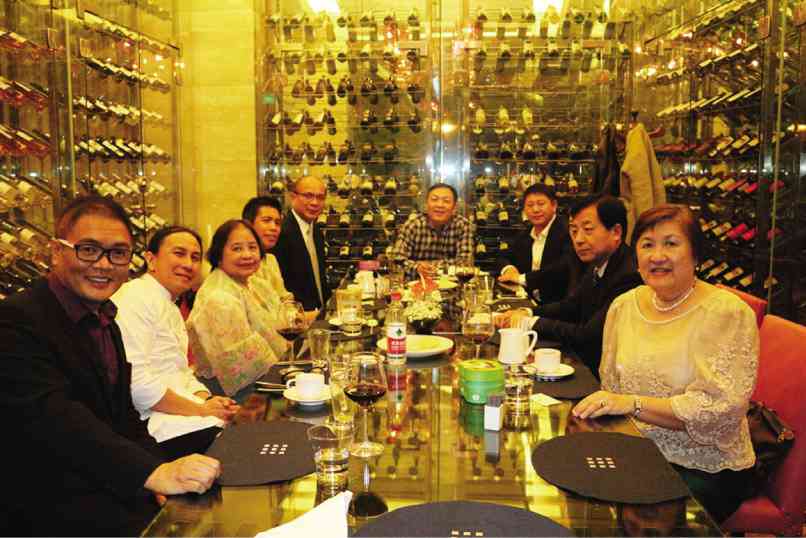 Finally I was going to see Beijing. At least I thought so. But the December smog ended up hampering the view of the sky and the city. We couldn’t even see the car in front of the one ahead of us.

It was only when I returned from Xi’an in Shaanxi Province that the sun appeared and Beijing showed its true colors. Alas, it was but a few hours before I had to fly home.

Xi’an is about five hours going south from Beijing by speed train. It is better known as the home of the Terra-Cotta Warriors, huge reproductions of the members of the army of Emperor Qin Shi Huang who ruled from 220 to 210 BC. The warriors were made to guard his tomb and to be his army in the afterlife.

But the main reason for my going to Xi’an was to attend a Filipino food festival, to acquaint diners with our cooking and the cultural and culinary ties that bind China and the Philippines. It was also a time to commemorate 40 years of diplomatic relations between the two countries, led by our ambassador to the People’s Republic of China, Erlinda F. Basilio, whose post is one of the most important and sensitive these days.

Cooking for the festival was chef Roland Laudico of Guevarra’s in San Juan, who flew in with his team. He prepared several lunch and dinner buffets; some of the dishes included chicken and pork adobo, pancit palabok, kinilaw, caldereta, chicken inasal and lechon, the lemongrass aroma of which was too difficult to resist.

The venue was Café Azur of Hotel Sofitel Xi’an, decorated with Ambassador Basilio’s collection of dolls which were all dressed in different native wear. The presentation was a show of diversity in traditional food and dress.

Mangoes on display were an attraction because the fruit is not grown locally, although Xi’an is known for the very sweet and big apples which are called Fuji even in China. The mangoes were still yellow green, yet diners insisted on eating them.

The opening reception was held at a function room of the hotel, where a traveling exhibit of Filipino food with pictures by Neal Oshima and text from my essay, both from the book “Kulinarya: A Guidebook to Philippine Cuisine” (Asia Society, Anvil Publishing, 2008), were on display. I was told it’s been making the rounds of different places, including Shanghai in China, and Bangkok, Thailand.

It was my role to expound further on the short quotes about our food at the exhibit. I began my talk with: “Filipino cuisine is a sum of Filipino history—from the indigenous food of the prehistoric era, to the influences of Asian cooking brought by trade, and the colonial influences brought by conquest.”

For the benefit of local journalists, Chinese influence on our food was emphasized. Even before the Spanish came to “discover” us, the Chinese have been trading with us, a country their ancestors called “Mayi” in their documents. Examples of such food still cooked today are the many pancit versions and humba, braised pork with Chinese ingredients like salted black beans (tausi) and salted bean curd (tajure).

Chinese bakers also operated the very first bakery in the country, established in Intramuros, and we learned from them how to do our many panaderia breads.

During free time my hosts took me to see the Terra-Cotta Warriors. It was a huge area; I learned that many diggings have yet to reveal the full extent of the army figures, the carriages, the weapons, the horses and, most important, the tomb of the emperor who ordered all of this massive work done.

While work on recovering and restoring artifacts is still in progress, the warrior replicas are already jaw-dropping—their different faces, the kneeling stance of archers, the larger-than-life-size horses, materials like metals used in spears, which the Western world would discover and develop only centuries later.

Our guide also pointed out restaurants that serve the famous biangbiang noodles that Xi’an is known for—large, thick noodles done by hand and taken with broth. It can be a challenge eating it, since my chopstick skills aren’t up to par and the noodles are heavy. But it was bracing and a bit spicy, which is how Xi’an food is described—great for the cold air that was not as smoggy as Beijing’s.

I read up on Xi’an and wanted to see it because it figured in the Silk Road trade as an “Eastern departure place,” as the Unesco site puts it. Posters greeted us about this latest Chinese promotion. But the more important information was that Xi’an welcomed different religions and philosophies like Buddhism, Taoism, Zoroastrianism, Nestorianism and Manichaeism. A later arrival were the Muslims, and today there is a Muslim Quarter and a mosque named One God Pavilion.

I wanted to visit the Muslim Quarter to taste the cuisine that must have evolved through the centuries. There was no time in my short stay, but I’m hoping to go back.

My thanks to Ambassador Erlinda Basilio, Consul Rhen Rodriguez, Joan Taguinod Pichay and Wendy Cruz for making this trip possible.