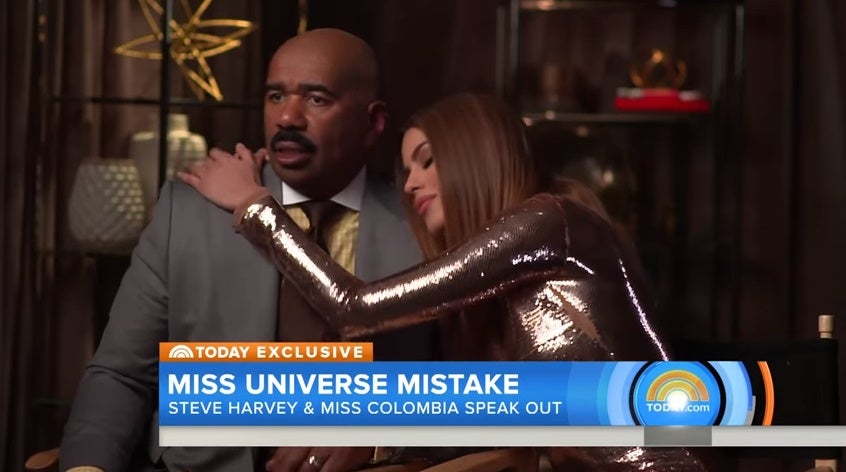 ALL IS FORGIVEN. Comedian Steve Harvey and Miss Colombia Ariadna Gutierrez share a light moment during their interview on the "Today" show. SCREENGRAB FROM 'TODAY'S' YOUTUBE ACCOUNT

Are Miss Colombia Ariadna Gutierrez and comedian Steve Harvey going to be co-hosts in Miss Universe 2016?

After all had been said and done, it seemed like the announcement mix-up in the Miss Universe 2015 coronation night was water under the bridge between the two.

READ: Miss Colombia chides Steve Harvey: You have to learn how to read

In fact, news anchor Natalie Morales, who had hosted the Miss Universe pageant multiple times, told the two during their interview on the “Today” show that she could see them hosting this year’s pageant.

“Well I’m gonna tell you my prediction. You two will be hosting next year,” Morales said.

Harvey, who signed a multi-year deal to host the contest, did not seem adverse to the idea of presenting the event with Gutierrez, whom he called as “right now, the most famous Miss Universe contestant of all time.”

“Let me tell you something. I promise you this woman will be on that stage next year,” Harvey said.

“But let her read the card next time,” Morales suggested in jest, referring to Harvey’s hosting blunder which saw him naming Gutierrez as winner instead of titleholder Pia Alonzo Wurtzbach.

Gutierrez reiterated that she already forgave Harvey for the gaffe, saying that the Miss Universe coronation night was both the worst and best night of her life.

“It was the happiest four minutes that I ever had. But after that I felt horrible. I was crying a lot. I felt humiliated. ‘Oh my God I’m not Miss Universe, what am I gonna do now? Everyone’s gonna laugh at me and make fun of me,’” she said.

“Now I can say it was the worst night of my life, but it was the best one too… I feel like I can breathe now… We are human beings. Everyone is able to make mistake,” the 22-year-old beauty queen added.

For his part, Harvey said he encountered a lot of hate and even threats following his hosting mistake.

“I needed her to forgive me. I needed her to know that I was genuinely sorry. I felt horrible,” Harvey said, calling Gutierrez as “the person who was hurt the most” in the pageant.

“With all the support I’ve got, the hate was pretty intense,” he said.

Harvey said in jest that he would not be going to Colombia for vacation, to which Gutierrez responded: “I think they’re (Colombians) gonna forgive you after this interview. They want us to sit together and to talk to each other and be like this.” YG/IDL