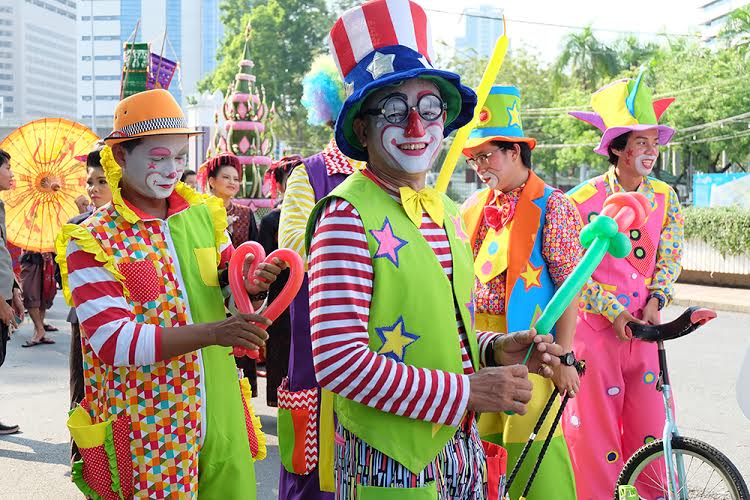 Hand weaves, cotton candy in sweet roti–the best of Thailand in one park

It was a sunny Wednesday afternoon in Bangkok’s Lumphini Park and, in one stall, surrounded by beautiful handwoven dresses, tops and jackets, were two people in earnest conversation.

“I also have a friend who is a designer in Scotland. If we give you patterns, can you produce them for us?”

The Thai woman he was talking to was much older than him, and regal-looking. She smiled patiently and finally spoke, “I’ve been doing this for 40 years. My workers are women in their 70s and 80s.”

Welcome to Thailand Tourism Festival 2016, where the best this country has to offer is gathered in one place.

The Tourism Authority of Thailand (TAT) transformed the 58-hectare park, which was originally created by King Rama VI in the 1920s, into a mini Thailand, with replicas of iconic landmarks, for the five-day fiesta.

On Jan. 13, opening day, the place was already packed with guests, tourists and travelers eager to see what was on display.

The cultural village had been divided into Thailand’s regions—northern, northeastern, central, southern and eastern—and there was plenty of action in each one.

It was a celebration of each area’s finest products, crafts, food, culture and traditions. People shopped and ate their way around the park, buying handwoven fabrics created by people from the north, lining up for milk tea made Thai-style, observing potters, weavers and other artists at work, and munching on the seemingly endless array of delicious Thai food and snacks.

We did the same, sipping what tasted like pandan juice one minute and biting into corn-dotted flat little cakes the next.

In one booth, we marveled at exquisite home décor that looked like they were made with identical bits of popcorn.

“This is made of rice?” we asked incredulously, pausing to take too many pictures.

We stopped in a booth to gawk at the Thai version of cotton candy wrapped in sweet roti called roti saimai.

There were nuts and fish, sausages and unbelievably sweet fruits and a multitude of drinks. It was impossible to have tried them all.

Thailand Tourism Festival 2016, the 36th of its kind, wasn’t just a great chance to see and enjoy Bangkok’s varied products, it was also an opportunity to interact with friendly and warm Thai people.

In one booth, a sweet lady was making khanom la, a traditional dessert from Narathiwat, a province in southern Thailand.

It was fascinating to watch. She would lift a batter-filled can lined with holes on the bottom and, in an efficient, swirling motion, let streams of the thin batter hit the pan, cooking it quickly before twirling it with a fork.

The result was a delicious, crispy, delicate dessert that crumbles in your mouth in wonderful little flakes. She let me try a sample and then challenged me to do it.

She demonstrated again and I watched, concentrating on mimicking her steps. She made it look so easy but my first attempt was so terrible that we both laughed. My batter turned into burnt drops instead of beautiful threads.

But I did much better on my second try, and she gave me a thumbs up and a huge smile. She rewarded me by letting me eat the khanom la I made. I gave her a hug before we left.

There were parades and performances and reenactments of rituals, each one showcasing the richness of Thai culture.

Yuthasak Supasorn, TAT governor, said, “The event is a center stage where participants can find a harmonious mix of Thai cultures and quintessential Thai ways of life from every corner of the kingdom.”

He added that he hoped the festival would help tourists find inspiration for their future trips to Thailand.

And for those seeking information about travel in Thailand, TAT has prepared an exhibition zone that gave visitors access to information, including their 12 Hidden Gems Plus campaign that encourages people to visit 24 off-the-beaten-path Thai provinces and destinations.

The fun continued after the sun set.

Actor Mario Maurer also made an appearance at the festival.

Thailand Tourism Festival 2016 was an eye-opener, teaching us that there was so much more about Thailand, a country we thought we knew quite well, that we needed to discover.