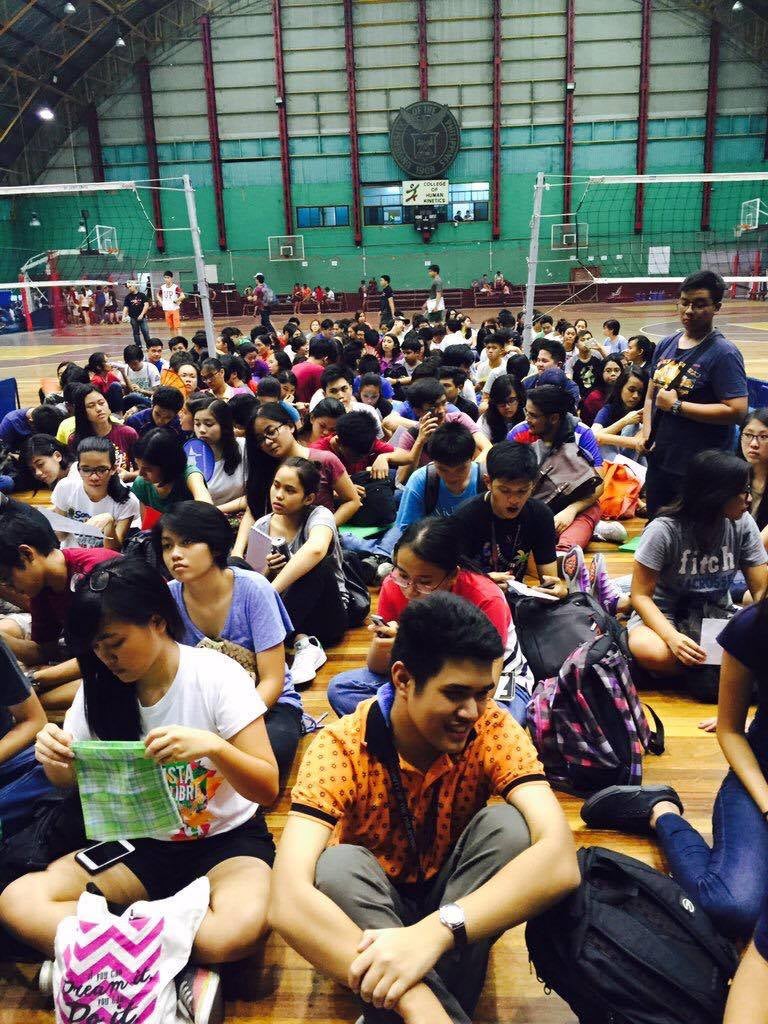 SEATED inside the UP gym, students from the College of Human Kinetics wait for their turn to enlist for classes. @JOAQLACSON

By: Irah Kyle Zapanta (Student correspondent University of the Philippines Diliman) 05:23 AM January 23, 2016

I COULDN’T believe it. I refreshed the web page for a few more times to make sure I wasn’t imagining things. But still, there it was: my name on the list of applicants who passed the University of the Philippines College Admission Test (Upcat) for 2015. Privileged to be an Iskolar ng Bayan, I pictured myself in the UP Diliman campus, casually strolling along the Sunken Garden, eating tapsilog at Rodic’s, high-fiving Zorro, a masked runner and a fixture on campus grounds, sporting UP-inspired casuals, and
watching the annual Lantern Parade.

Little did I know that studying in UP meant going through the dreaded enrollment system. You may have heard stories of students camping in UP overnight or hanging out in their respective colleges as early as 2 in the morning just to enlist for a class. You may have seen tweets from frustrated students waiting in line for hours and hours. And you may have read status after status on Facebook complaining about why nothing has been done to improve the system. Unfortunately, all of them are true.

Some freshmen describe their enlistment experience as a taste of hell:

“I didn’t sleep before enlistment day. I got to the line at 1:15 a.m.—and I was ninth in line.” Antonio Castillo, 20, BS Economics

“My adviser is really busy and her office is on the opposite end of UP so it made pre-advising, validation and assessment difficult as I had to go back and forth after each step.” Miggy Angeles, 17

“CRAZY. I was super tired because I spent two days enlisting, going around the campus finding GE subjects, and lining up for hours. I went to UP at 4 a.m. to line up for KAS 1 and got it at 11 a.m.” Jethro Carlos, 18, BS Computer Science

“I planned on shifting to another course and I needed to take a certain subject; unfortunately, there were no more slots available for that subject. The experience was awfully frustrating and depressing.” Anjo Valdecanas

“It’s like Miss Colombia in Miss Universe 2015. Just when you think you have all your subjects, UP decides to take them all away.” Patrick Chua, 17, BA Speech Communications

“UP’s enlistment process is usually compared to ‘The Hunger Games’: Everybody prepares to go through the hellish, bloody process, but only a few succeed.” Carl Bognot, 17, BS Psychology

Fortunately, some of them had their own way of entertaining themselves while enduring the deadly combination of heat and hunger:

“I made sure to load my phone with a lot of my favorite music albums to keep me calm throughout the day. I also made sure to line up with friends so we can keep each other from going insane.” Jolo Zagala, 17, BS Business Economics

“If I was with friends, I would talk to them. If I was alone, I’d listen to music or try to read a book.” Katrina Feliciano, 18, BS Psychology

“When you are with friends, there is always entertainment. We played card games and sang a little. After all, it was 3 a.m. and there was nobody to disturb in the Chemistry building at that time.” Antoine Borromeo, 17, BS Psychology

“I was with a bunch of friends so I wasn’t really bored, but I had a book and downloaded several games on my phone! Zigzag is a must.” Kelsey Vannah, 16, BS Business Administration

My wonderful friends kept me alive. While waiting, we played card games, shared stories, and joked around just to keep our spirits up.” Pamela Pascua

How to fix it

Some students who have had enough of this inefficient system suggest ways on how to fix it:

“I’d probably fix the way information is disseminated to the student body. For example, the day before enrollment, a member of the University Student Council announced it would be implementing the TRICOLL rule, which prioritizes the students of three UP colleges. This caused a panic among some students. Then the announcement proved to be false.” Pita Ochave, 17

“I’d probably make a better communication system to avoid confusion and waiting in line for nothing. One of my classes was canceled without prior notice and I only found out the reason for it about two or so hours later.” Isa Meriales, 17, BA Fine Arts

“Maybe centralizing all the lines in one place can make the process a lot easier, like freshman pre-enlistment. Of course, not having a physical line (that is, enrolling online) might be a lot better. I just don’t get the point of having 10 billion enlistment centers and having students run around for classes in different buildings.” Anonymous, 18, BA Broadcast Communications

Ironically, UP, one of the top universities in the Philippines, continues to be regarded as the “University of Pila.” Students in UP have suffered long enough from its inefficient enlistment system.

Some are even forced to go through a semester with less than their required subjects, delaying their chance for an early finish.

The enrollment procedure in UP is definitely an unforgettable experience—but at the same time we ask ourselves: How long will we have to endure this system?

To the UP administration, please hear us out. All of us want something to be done about this enlistment system. We know that you are taking steps to improve it. Know that we students are more than willing to help you solve this issue. You are not alone in this fight. Let’s work together for a better UP.