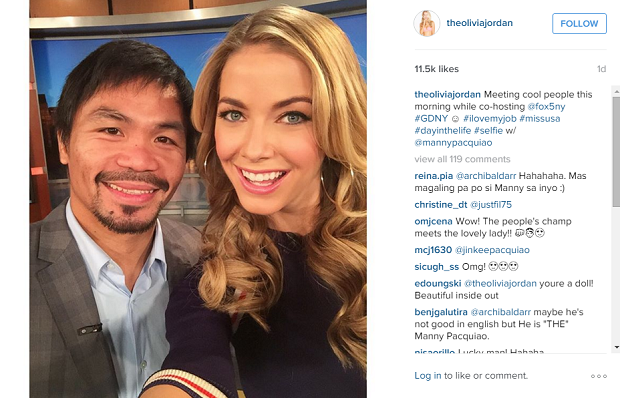 Miss USA tells Pacquiao: I may be a ‘Filipino lucky charm’

Miss USA Olivia Jordan has considered the possibility that she might be the lucky charm of Filipino boxing icon and Sarangani Rep. Manny Pacquiao, who is seeking a Senate seat in the upcoming national elections in May.

Jordan, who finished 2nd runner-up in the Miss Universe 2015 pageant, made the remark during Pacquiao’s recent appearance on Fox 5’s “GoodDay New York,” where we she was a co-host.

Pacquiao, who is currently in the United States to promote his upcoming fight with Timothy Bradley Jr., asked the beauty queen from Oklahoma what she whispered to titleholder Pia Alonzo-Wurtzbach during the coronation night when host Steve Harvey admitted that he made a mistake in the announcement of winner.

“I told her that I think she’s Miss Universe, which is pretty cool,” Jordan said.

“But the rumors are now going around that I may be a Filipino lucky charm because I was there when Megan Young won Miss World, and for Pia for Miss Universe, so you’ll win this fight in the Senate race maybe,” she added as she crossed her fingers.

Toward the end of the interview, Jordan added in jest: “He’s gonna be the president!”

Pacquiao, a top absentee at the House of Representatives, is running for senator under Vice President Jejomar Binay’s United Nationalist Alliance.

Prior to her Miss Universe stint, Jordan also joined and finished in the top 20 of Miss World 2013, which crowned Filipino actress-model Megan Young as winner.

Jordan earned praise and admiration from Filipinos after being seen supportive of Wurtzbach following the Miss Universe gaffe. The two were roommates in New York.

Wurtzbach shared an eight-second video of Jordan with Pacquiao through the official Miss Universe social media pages, where the American beauty queen sent her shoutout to the Philippines. RAM

Miss USA: Both Miss Philippines and Miss Colombia were worthy of crown