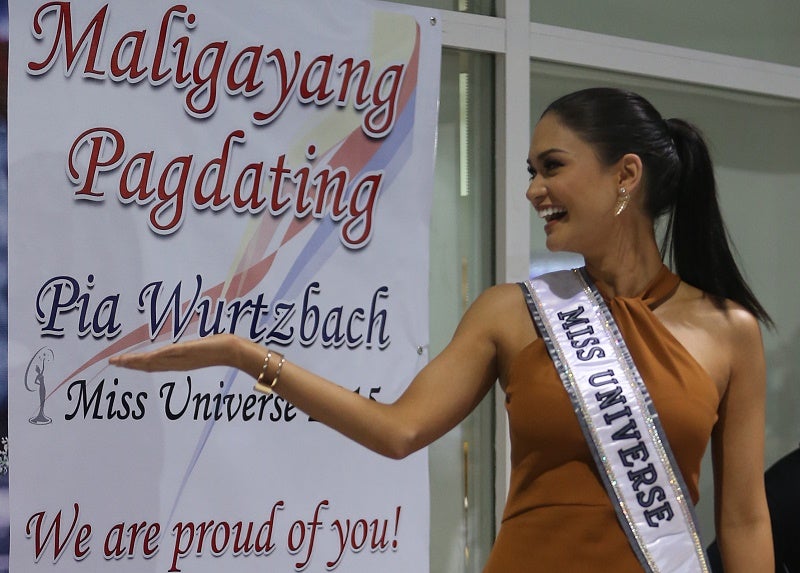 Miss Universe 2015 Pia Alonzo Wurtzbach gestures as she is met by supporters and the media upon her arrival at Terminal 2 in Manila International Airport. EDWIN BACASMAS

‘I have real Miss Universe crown, not replica’

Upon the arrival of reigning Miss Universe Pia Wurtzbach in the Philippines early Saturday morning, many were wondering: Where was her crown?

In an interview with Dyan Castillejo that aired on the ABS-CBN News Channel, Wurtzbach said she brought home “the real deal” with her.

(Of course, it’s [the crown] here, and the crown we brought home is the real one, [there could also be] instances when we go to areas that are crowded or “rough,” so we also actually have a replica crown.

But they said, of course, the Philippines deserves the real deal, so we have brought here the real crown.)

The Miss Universe’s art deco-inspired crown was encrusted with diamonds and sapphires.

During the pageant’s coronation night, many viewers commented that Wurtzbach’s royal blue gown made by Filipino designer Albert Andrada matched the crown.

Wurtzbach said she was happy that she was able to fulfill her promise to bring home the crown after a 42-year drought.

(I literally brought the crown home. In my interviews I always say, “don’t worry, I’ll bring home the crown,” I’m glad that I’m finally able to do it.)

Wurtzbach arrived at the Ninoy Aquino International Airport at around 6 a.m. Saturday.

She will star in a grand homecoming parade on Monday, Jan. 25, which will start at the Cultural Center of the Philippines Complex in Pasay City at 2 p.m. and will end at the Araneta Center in Cubao, Quezon City.

The Filipino beauty queen said she was hoping that many people will show up during the parade in the metropolis.

(Obviously, I want the parade to be a grand success, hopefully many people will come and watch.)

Wurtzbach, who will stay in the country until Jan. 31, is also set to attend a tribute show and dinner, hold charity events, and pay courtesy calls to government officials. YG/CDG

READ: What does Pia Wurtzbach get as Miss Universe?