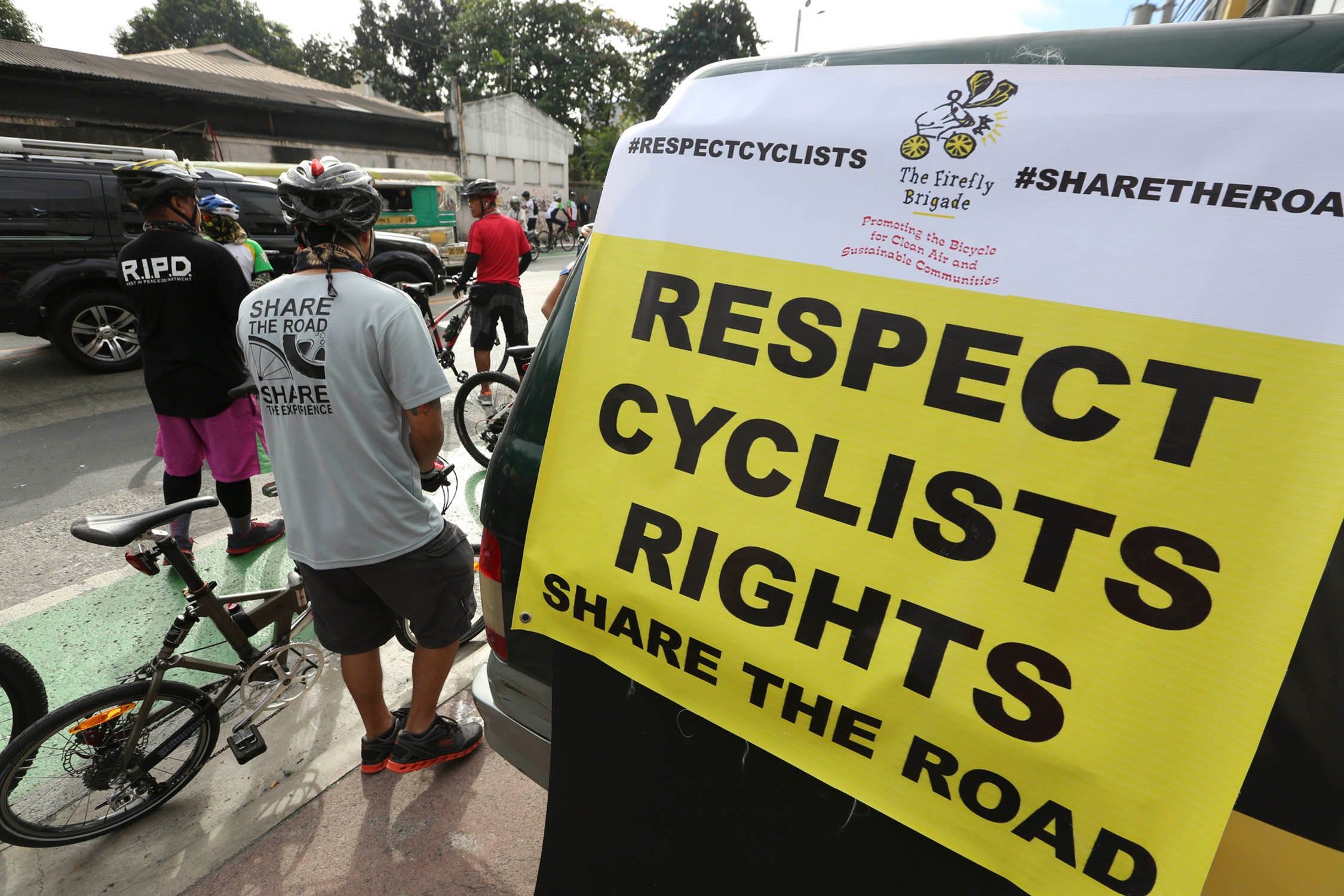 The 30-year-old single mother of two had grown up and gone to school in Marikina, one of a handful of cities in Metro Manila with an official bicycle transportation system, which includes a network of bicycle lanes.

“Since we were kids, that was how we bonded,” recalled Melevo’s sister, Beverly. “We used to bike to Riverbanks and bike home, and never had any mishaps. She was always asking us to ride to Marikina River Park. She wasn’t a newbie cyclist.”

In fact, Melevo—who also occasionally joined organized group rides—was confident enough with her riding skills that she used her bicycle to run errands around town, including ferrying her children to school.

On the morning of Jan. 5, she had just taken her 5-year-old son to his prep school and was riding home when the unthinkable happened.

Dead on the spot

According to eyewitness accounts, Melevo had just dismounted and was preparing to walk her bicycle across a pedestrian lane at a busy intersection of Mayor Gil Fernando Avenue when she was struck and run over by a dump truck. She died on the spot.

The truck driver later claimed that he did not see Melevo, but witnesses said the truck was moving at low speed, and had ample time to brake.

An autopsy report later revealed the extent of the woman’s horrific injuries.

Her family could only take comfort in the thought that it was over in an instant.

“It’s too painful,” said Beverly. “She chose to take the bike lane because it was supposed to be safer there, but because of the driver’s carelessness and lack of discipline, he chose not to respect the bike lane and killed my sister.”

Bike riders are killed in road accidents with alarming regularity in Metro Manila. The victims usually end up as mere statistics in the annual count of road fatalities.

But Melevo’s death gave these victims a human face.

Her social media accounts give glimpses of the life that was snuffed out that Tuesday morning: that of a lively young woman just entering her prime, struggling to raise two children on her own, and still finding time to run the home she shared with her three sisters and to have fun with friends.

It’s hard for anyone who ever rode a bicycle on the street not to feel a sudden chill, and think: there but for the grace of God…

An article written by cycling activist Katti Sta. Ana put it more bluntly: “We could have been Lorelie.”

On Jan. 17, hundreds of cyclists rode from San Juan to the accident site in a “critical mass” ride organized by Firefly Brigade, a cycling advocacy group. In a simple ceremony, the group laid flowers and lit candles on the spot where Melevo died, paused for a minute of silent prayer and ended the event with a call for justice.

Melevo’s family is pursuing criminal and civil cases against Jonathan Silverio, the driver of the dump truck, who is out on P30,000 bail, and the operators of the trucking company. They hope her death will lead to better laws protecting the safety of cyclists, pedestrians and other road users.

Nearly all these bills call for the creation of bicycle lanes in one form or another to encourage more people to ride bikes. There are also formal and informal groups, such as the We Want Bike Lanes in RP Movement, calling for the same things.

But are bicycle lanes really the answer?

“Unfortunately, a lot of motorists do not acknowledge that the bicycle is part of the transport system,” said Mia Bunao, a member of Firefly Brigade. “It’s not just a matter of having a bike lane. It’s also [a matter of having] the infrastructure, [law] enforcement and an awareness campaign among motorists and pedestrians. It could all have been avoided had the truck driver obeyed traffic rules.”

Bunao knows whereof she speaks: While cycling to attend Melevo’s wake, she was struck by a vehicle that ignored a red light. The accident tore some ligaments in her shoulder.

“There has been a lot of drumbeating about a dedicated, separate bicycle lane, but that’s only one possible version,” Jack Yabut said.

A veteran performer with the Philippine Educational Theater Association (Peta) and lifelong cyclist, Yabut is a cycling advocate with Firefly Brigade and a bicycle race organizer. He also conducts regular clinics on road safety for cyclists.

“There are many designs and standards in other countries that we can study,” he added. “Some are open and shared with other vehicles, some are completely dedicated bike paths, and many are in between.”

It’s like “pusoy” (a card game), there’s good, better or best. “The best option is really a dedicated and separate bike path that’s protected, maybe with lighting and rest stops,” he said.

Of the 230 kilometers of roadway in Metro Manila that have been deemed feasible for bike lane development by the Metropolitan Manila Development Authority (MMDA), about 5 percent have bike paths built in the last 15 years.

READ: How biking around Manila has made my life better

“[Having] those lanes won’t happen overnight, or even in the next 10 years,” Yabut said.  “While we should continue to advocate for good, better and best solutions, we also have to continuously use the roads so motorists and pedestrians get used to sharing the road with bicycles.”

Even when they do, bicycle paths are only part of the equation that will make for safe cycling, he stressed. Behavioral change and discipline on the part of road users may be the more important component.  Cyclists should also learn the skills they need to navigate traffic safely.

Filipinos can take a cue from the Japanese, who have remained a nation of bicycle commuters despite rapid urban and technological development, Yabut added.

“In Japan they have ‘invisible bike lanes.’ The ‘bike lanes’ are in the heads of cyclists and motorists … and in the behavior and culture of the people,” he said. TVJ